So, you want to be a doctor? Think again! 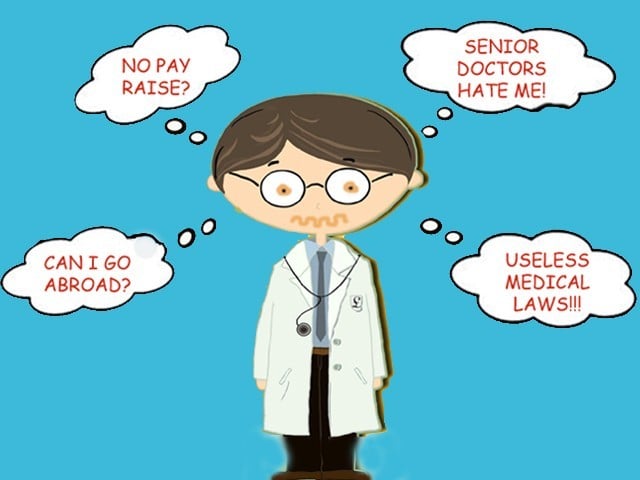 Everything wrong that happens in a hospital has only one reason. You. DESIGN: AREEBA KAMAL

Dear prospective, to-be doctors, this article contains stuff you may consider sadistic or full of spoilers. Read at your own discretion. Don’t say you were not warned!

Let’s observe some reasons why your medical ambitions might turn out to be more challenging than you initially thought they would be. No pressure, of course.

You will never, ever stop studying

You will have to appear in approximately about 15,000 examinations. Yes, it’s true, and mind you, more keep adding up on a daily basis in case you ever think you are close to getting done.

It only makes sense then that books and wards are going to be your muse for quite some time now (read: your lifetime).

A considerable body of evidence goes into suggesting that there’ll come a time when the same new-borns will be sharing their own graduation pictures, and you probably will still be studying!

Also, don’t expect, respect or awe in exchange of your unwavering commitment to studies. You’ll be seen as a nerd by all and sundry. All the cool adjectives they use for normal human beings will always remain elusive to you. And no one will turn around to steal a glance at your lab-coat. (Silent prayers for those who expected this to happen.)

At some point, after you have studied in detail every artery that’s in every nook of every bodily part of yours, you will crave ignorance. It is then when you will realise that ignorance was bliss.

Senior doctors will make you suffer

Brace yourselves for endless hours of cringe-worthy humiliation at the hands of potential mentors.

You won’t be getting any kind training, considerate attention or encouraging words from most of the senior lot of doctors. The prime focus they’ll have on you will be when they’d have grown tired of you not coming to the hospital on time and not treating the patients in they way they expect you to.

Then, they’ll molest you mentally and you will be wishing they went back to just ignoring you.

You will be a silent witness to the condescending attitude some of your senior doctors will have towards the patients. And apparently it’s only in Grey’s Anatomy where you can get away even with unauthorised autopsies. (Or PTV’s Painkiller where you can get away with just about anything!) But in the real world, there’s usually no time difference between the interval you open your mouth and land yourself in detention.

Not to insinuate that junior doctors are any easier to deal with. Juniors will come to you and ask you about stuff you’re too smart to remember. Seniors will summon you to ask about stuff that’s too smart for you to remember. You’ll be a dunce for both. Blame it on great expectations.

You want a pay raise? How dare you!

For the initial years, which is most of your youth for the record, you’ll have only blood, sweat, vomitus, faeces (and pus too, if you’re really lucky) over you as the sole souvenirs of your profession. It will be quite some time before you take charge of those House MD type scenarios – if you ever get to do that, that is! But when you feel like you’ve laboured enough to merit a pay raise – prepare to be thwarted.

Ask for a raise in your pay once, you’ll be duly ignored. Twice, you’ll be denounced. Thrice, all TV channels will go berserk on you. For the fourth time, when you subsequently go on a hunger-strike, you may end up in jail.

Then again, on the 599th time, if you still have the heath and heart for it, you might actually get an increase in your salary.

Well, congratulations. Now, commercial drivers are making more money than you are!

Politicians hate you, but you’re a messiah – go figure

You’ll soon realise that when politicians talk about strengthening the health system, they actually just mean they plan to give the doctors a pretty good beating. Your lot and you will be seen as the nemesis of health-care. All the legislation will have only one purpose- to torture you.

And no, you cannot complain about anything. In case you don’t know already, you’re a messiah.

Want to go abroad? Shame on you!

No one will ever try to understand the reasons why new doctors are so eager to go abroad; no one will sympathise, let alone empathise. What everyone will agree to is that you’re a disgrace to your country – a filthy creature that values money above all things good and moral. In case you don’t know already, you’re contemptible and objectionable.

Even if you are thick-skinned enough to take on the scathing remarks at home, authorities abroad aren’t looking forward to your arrival either. Foreign countries won’t be too excited to welcome you – the doctor from Pakistan – and give you a place within their domain. But all this is just petty details.

It’s all your fault, doctor

Yes, everything happens for a reason, but everything wrong that happens in a hospital has only one reason; you.

Problems you face could be completely unrelated to your skill. Sometimes, you cannot examine the patient since there’s no electricity. Often, the patient still has the disease since he was non-compliant. Or maybe a patient has got some idiopathic complications. But when you try to explain the issue at hand, the reactions you receive go somewhat as follows:

What type of a doctor are you?

Who gave you a degree?

Why are you still alive?!

On the other hand, when you look really hard, you may find a silver lining, doc.

Every doctor has his or her day. One day, you’ll have waded through these murky waters, earned some authority and will be in a position to change things for the better.

However, you may find that Ponds age-miracle doesn’t work on you anymore and beta-blockers are your new food supplements. Then maybe, you’ll realise that working for change is over-rated and is less important than getting yourself cardiac prosthetic devices. So the latter is what you will eventually go for.

By the way, happy medicine!

Note: This is a satirical piece and is not directed at anyone in particular, nor is it meant to offend sensibilities.