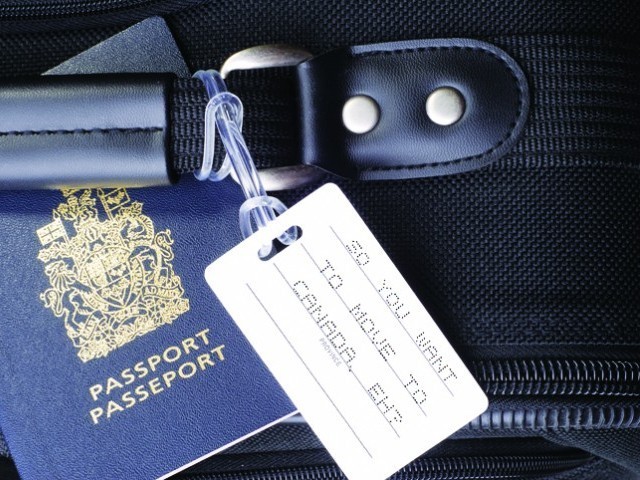 Once a Pakistani, always a Pakistani. Oh but they forget so easily. PHOTO: FILE

It’s been a little over a year since my immigrant status got confirmed in Canada and I have met some interesting kinds of Pakistanis. Immigrants who tend to fall in a certain ‘type’. Even I fit in there somewhere.

This is based solely on my observation and interaction. At the risk of over-generalisation, here goes:

‘I complained in Pakistan. I’ll complain here. Stop me if you can.’

In Pakistan, they complained about the skin-sizzling heat. In Canada, they complain about the mind-numbing cold. Back home the hoard of house helpers was too much to handle. Now, they whine about doing all the work themselves. Back home it was the terrorists. Around here it’s the serial killers and the sociopaths. Trust them to come up with the worst possible scenario in the worst possible situation.

‘Oh we are leaving as soon as we get our passports!’

They never fully unpack, be it their material assets or minds. They never buy a house; if it were up to them, they’d live in a motel until their passport mission finished. They don’t travel. They don’t spend unnecessary money. Immigrant gypsies, as I like to call them.

All this trouble, for what? For starters, they understand the power of their blue passports. Their children may come back to Canada for a higher education or they may even use the passports for better employment opportunities back home. But like a troop on a mission, they make little to none human connection.

‘There’s no place like Canada. Back home we never…’

Oh these are true lovers of Canada. Everything from the weather, to the people, to the infrastructure and welfare; their hearts sing for their new home. But they never stop comparing everything with Pakistan. Standing at a bank, they can be caught thinking:

‘Oh if this were Pakistan, I’d have high blood pressure by now, considering the lack of queues and a proper system.’

Or when a police car passes by:

‘Look at those responsible, honest policemen. Back home police is the most despised profession.’

They’d be discussing Canadian politics at someone’s dinner party and suddenly talks about corrupt Pakistani politicians would pop up. Canada is their utopia, so they wouldn’t be caught dead saying anything bad about the country. Like an over-competitive parent, maybe it is their inborn love for Pakistan that compels this insane criticism. Or maybe they just love finding faults. For them, it’s never greener on the other side.

‘I will never mingle with these goras (but I will eat up their welfare.)’

These are people who might look at their surroundings with contempt. From their clothes to their actions, they make sure everyone knows how serious they are about their identity and more specifically, their religion. They won’t let their children mingle with the locals nor will they let them enrol in any activities that could lead to too much exposure of the new culture. They will hardly ever be seen in parks, theatres, or cultural events. Oh but they will find all possible methods to show eligibility for benefit options, like employment, health, children education, old age etcetera.

‘Pakistani? No no, I am Canadian! See I love Tim Horton and I have an accent and all.’

They buried their Pakistani passports the minute they landed in Canada. And if they were born and bred here, they don’t have much to forget about Pakistan in the first place. From their clothes to their beliefs, everything is Canadian. Their children have as much knowledge of Pakistan, as Arabs do about poverty. But that doesn’t change the reality. Once a Pakistani, always a Pakistani. Oh but they forget so easily…

Converting the price of a $5 toothbrush and saying, ‘Oh Rs500 for a tooth brush?!’

These immigrants are stuck in a time warp and can’t make peace with the fact that they are no longer in Pakistan. Grocery shopping with them can be excruciating. Mental math conversions, fantasies of Pakistani tailors, lawn designer exhibitions and hand-made roti (flat bread) are only some of their homesick remedies that make them feel better.

These people understand that they chose to immigrate, for a better future, for better education or for whatever reason; no one forced them to come. So they try and make the most of it. A stark opposite of the ‘un-settlers’, these immigrants tend to assimilate in their environment without much trouble.

They hold on to the important values, which they grew up with, but are always open to new customs and ideas. They make new friends, travel and encourage relatives and friends back home to immigrate too! Yet their love for Pakistan doesn’t die. If anything, it gets stronger.