Why are Iranian women protesting against the hijab now? 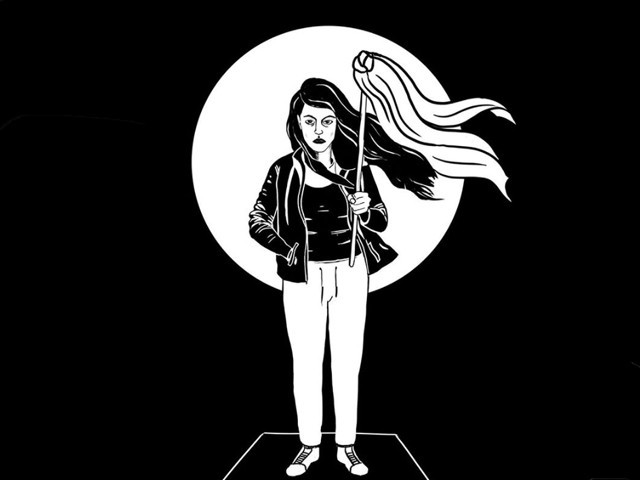 In recent weeks, many such cases have erupted in Iran where women are waving their headscarves on sticks and chanting slogans that defy the state compulsions against them. PHOTO: INSTAGRAM/HAJARM

Religious freedom has been a pipe dream for years now, especially for women, who are subjected to male dominants in this society. A major portion of the woman population has embraced this situation as a norm and continues to cultivate it within the minds of their young girls as well, others, however, have not. They have strived and fought for basic rights, such as education, health, the right to vote and the liberty to go out unaccompanied.

While the tide of feminism and many socialist organisations have washed part of the misogyny that exists in numerous societies, there is still a long road ahead, blurred with thorny inconveniences and legislative boundaries.

One of these constrictions has been in place in Iran since the 1979 revolution that completely altered the history of the Iranian nation. After the accession of the supreme leader, Ayatollah Khomeini, laws pertaining to Shariah were interpreted and enforced. Included in this was the compulsion of wearing hijab for women who are above the age of 13.

For decades, women have overlooked this restriction, in a bid to avoid confrontation and conflict. But the 21st century has espoused strength and a vision to attain freedom amidst all sorts of people. This awakening has led to many people freeing themselves from oppression, whether it is men and women of colour or the protests that led to the crippling of strongholds such as Egypt’s Hosni Mubarak and Libya’s Muammar Gaddafi. This new era has also seen leniencies from the Saudi monarch, with respect to freedom for women, and now people in Iran are also standing up for their freedom of choice. People have realised that there exist certain liberties that not even the most powerful human king can confiscate.

In December 2017, 31-year-old Vida Mohaved was witnessed waving her headscarf with a stick on Inqilab Street in Tehran. Inspired by civil rights activist Masih Alinejad, who runs a website ‘My Stealthy Freedom’ where she encourages women to share ‘pictures of defiance’. Mohaved was arrested but paved the way for numerous other protestors to follow suit.

In recent weeks, many such cases have erupted in Iran where women are waving their headscarves on sticks and chanting slogans that defy the state compulsions against them. Protestors claim that it is not a bid to thwart religious teachings or wage war against the cultural ideologies in place; rather it is in defiance of the restrictions and oppression that arise from such laws.

According to reports, 29 women have been arrested for defying the laws and protesting for their right of choice, but the matter is still underway. While many demand the resignation of the supreme leader, there are others who are vying for legislative reforms. With sympathisers in the Rouhani government, their resistance may take form.

However, the true challenge remains pertaining to the mindset of the people. This mindset requires women to willingly let men control them and accepts men’s audacity to regulate women’s choices. There is a dire need for a campaign that spreads awareness about consent and freedom of choice. Hijab is a multifaceted topic that is often the favourite one amongst religious clerics. They claim it is the first step to religiosity and modesty. But, in all honesty, it is also the first step to controlling the affairs of women.

As a consensual hijabi of over five years, what allows me to embrace covering my head is the freedom to be allowed to choose. Had I been forced to don it, I would probably not have been able to abide by it. And that is perhaps why states must not be allowed to intervene in such private matters.

The Quran is brutally honest when it states, “there shall be no compulsion in [acceptance of] religion.”

And in fact that is the cause of the downfall of many Muslim societies present today. There must be no compulsion. The choice to wear or not to wear a piece of cloth lies with the individual alone. It is perhaps the most personal affair of a woman that is being monitored by state authorities. There is really no question as to whether it is Islam-compliant or not. There is no Muslim, man or woman, who will blatantly go against the hijab. However, it is still a matter of personal choice, and that is what protestors are trying to helm attention for.

The fact of the matter is that God deals with intentions and not the act itself. If you and I were to forcefully commit a ‘good deed’, God would still judge us upon our intentions. Therefore, we should be cognisant of the fact that forceful commitment to such a grand religious act is pure ignorance. It highlights the need for powerful men to enforce their strength and power on the various segments of the society.

Women are perhaps the greatest force to be reckoned with, if only they realise it. To judge them based purely upon the covering and uncovering of their heads, is perhaps the lowest level one can stoop to. We must encourage and allow them to be free, in their choices, in their opportunities to excel and in their lives to achieve.

For a nation to progress and prosper, it is imperative that the marginalised communities be streamlined. With a female population of around 49%, Iran is surrounded by grievances concerning half of the population. It is an issue of fundamental rights and sovereignty. No one should be permitted to base laws upon their specific interpretation of scriptures. For justice and equality to prevail, the Iranian government must stop arresting the protestors and allow their input with relevant logical rationale. This is not a matter to be resolved holed up in emotional religious debates, but requires calm discourse.

It is for the government to realise that they must not interfere in petty personal matters but look beyond, to the greater issues thawing the state administration. The fact that Iran is busying its forces on the arrests of peaceful women protestors while the world fights the Donald Trump phenomenon, the terror of the Islamic State (IS), nuclear proliferation, global warming and climate change, explains a lot about the priorities of the Iranian government.

A government acts as a ceremonial father figure, not a controlling, overbearing, immature elder brother. It is for the people of Iran to make a decisive commitment to this cause, for it is not just a matter of the hijab but the basic tenet of lawmaking. If the Iranians lose sight on this, it is a precedent for their government to continue intervening in personal choices, an act unacceptable under the liberties granted by the United Nations. And if they do not act now, there is no knowing what the future holds for them.

Iran stands at the brink of a harrowing dilemma where freedom of speech, right of choice and the liberty to live freely, is scathed by a great risk, earnestly pleading for reprieve.