My hijab is both Islamic and unforced 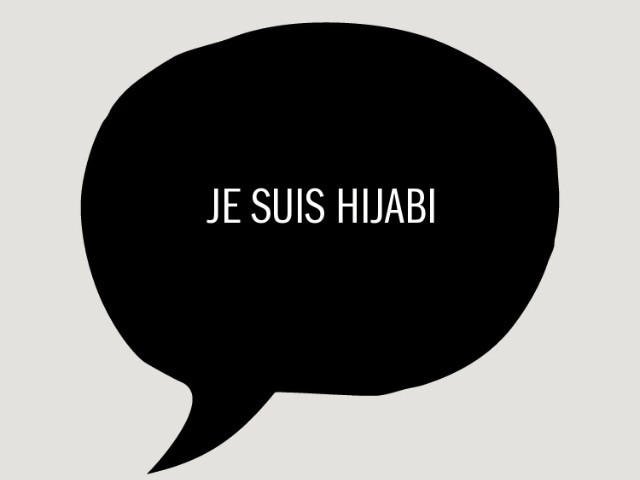 Canada’s #JeSuiHijabi campaign — where women voluntarily wear the hijab in solidarity with Muslim women — has been a huge success. PHOTO: Twitter (@jesuishijabi)

Richard Dawkins recently called upon Muslim women to shun their hijabs as a show of solidarity with the victims of Paris attacks. Dawkins is an anti-theist, wholly ignorant to Islam. Thus, his case against the hijab fits perfectly well in his anti-Islam narrative. However, when Muslim women — who take pride in their ‘feminist’ credentials — cite half-baked and fabricated definitions of ‘hijab’ and join the club to make a case against a guidance clearly rooted in the Holy Quran, they only succeed on placing Hijab wearing women in danger.

Not only do Asra Nomani and Hala Arafa undermine their own credibility, they are also propagating a false notion about a clear Quranic guideline. They demean and shame millions of Muslim women who adorn the hijab willingly, as a fulfilment of Quranic teachings. For women who observe hijab, it is not merely a piece of cloth, nor a symbol of defiance. Rather, it is a path that aids in self-purification and nearness to their Creator. It is a means to inculcate modesty. By choosing to wear hijab, I feel liberated and empowered in the literal sense.

The authors assert hijab as the sixth pillar of Islam – it isn’t. Anyone who has studied the basic tenets of Islam knows this. But digging into the Quranic teaching, the injunction about modesty starts by addressing men — not women. It says that men, to be pure, should restrain their looks and guard their private parts (24:30). Only after addressing men, subsequently, the Quran advises women in similar words, beckoning them to restrain their looks and guard their private parts. It also says that women should draw their head coverings over their bosoms, and only display their beauty to their husbands (24:31).

No doubt some men, and some women who observe the hijab, bully non-observant women to comply. There is no Islamic justification for these actions. Such coercion is the result of corrupt people — not the Holy Quran which instead declares that there should be no compulsion in religion (2:256).

The Holy Quran never mandates that anyone may forcefully thrust hijab upon women. Rather it is an outer garment that must be imbued with a spirit of modesty that should be inculcated within. The outwardly expression solidifies that core purpose. When Nomani and Arafa condemn backlash of some hijab enforcers, they must concurrently refrain from emulating the very same strategy they detest, while judging those who observe hijab. Otherwise, they further demonise and endanger women who choose to wear hijab by promoting anti-Muslim sentiment.

The solution to men who oppress women is in better leadership, not in blindly changing the Holy Quran. Regarding hijab, the head of the Ahmadiyya Community advised,

“Men should remember that they have not been given powers to police others and should restrain themselves. It is not for them to cover the heads of women from outside. Men are commanded to restrain their eyes; they should fulfil their own obligations. There is not even any commandment to forcibly cover the heads of Muslim women, let alone non-Muslim women. It is men like these who have hard-line ideas.”

The authors likewise make a lame case that these Quranic commandments for hijab were for a time when women were vulnerable to sexual harassment, implying that the modern world is devoid of that vice. Really? One can only lament at these false illusions. In reality women worldwide remain equally vulnerable to sexual harassment. In societies, where women have minimised clothing or head coverings, the statistics are equally staggering.

One out of every six American women has been a victim of an attempted or completed rape in her lifetime. Domestic violence is the leading cause of injury to women, and every nine seconds in America a woman suffers assault. These horrific facts are indicative of an undeniable reality that women of all ages and times have been vulnerable to abuse by men. This is one reason why the Holy Quran first addresses men to cast down their eyes and not gawk at women for any reason. That is, the greater burden of hijab is on men, not women. Sexual harassment is a pandemic that the world continues to face. It is certainly not one that ceased beyond sixth century Arabia.

Women who adorn the hijab prefer to be judged beyond their embellishments, just like all other women. Canada’s #JeSuiHijabi campaign — where women voluntarily wear the hijab in solidarity with Muslim women — has been a huge success and has galvanised this point with support from all walks of society. Hijab is not a symbol of sexual distraction; rather it is to the contrary. For millions of women, like me, who adorn the hijab voluntarily, we demand respect and fair treatment.

Jayden of U of S feels empowered in a hijab.#JeSuisHijabi pic.twitter.com/s0tIeiNXyr

We prefer to be judged by what’s inside our heads rather than what adorns it.

The author is a community activist who resides in Fort Lauderdale, FL, USA. She tweets @mansuraminhas (twitter.com/mansuraminhas)