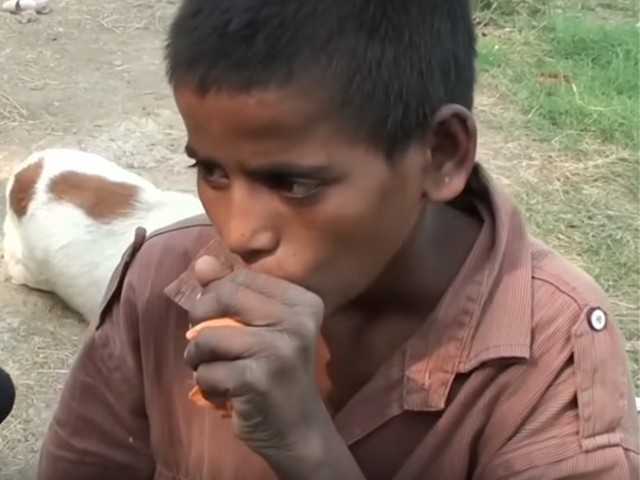 Be it India, Pakistan, or Afghanistan, there are countless kids who share the exact same story and addiction. PHOTO: SCREENSHOT

A video went viral a while ago, which means that you have probably heard of “Kamlesh” and his “soluchan” (solution) by now. For a while, it seemed like you couldn’t go anywhere without the jokes and the memes following you. The documentary on Kamlesh was being shared everywhere, yet for all the wrong reasons.

I saw this video accidentally, and could not find a single reason to laugh. In fact, this is the first time I have heard the story of a “kachra chunnay wala” child (garbage collector), the likes of which one can see in Karachi all the time, coupled with the dirty clothes and the garbage bags.

The words of Kamlesh reverberate in various languages all across South Asia. Be it India, Pakistan or Afghanistan, there are countless kids who share the exact same story and addiction. This may be the first time a drug addicted child who collects garbage for a living has spoken out in a popular medium, however, I believe if this interview was taken from such a child in Karachi, the story would essentially be the same. Our cities are growing at such a rapid rate that the by-product is the creation of garbage collection jobs for many of our underage citizens. In South Asia, garbage is actually a form of social security as well as an employment agency for thousands of kids. It is now a de-facto job for children of all ages, especially those who are aged 10 or younger.

Each and every word uttered by Kamlesh is problematic, be it abandoning his mother and happily working as a garbage collector, to earning INR 120 per day and spending most of it on his ‘solution’ and not his food. This is the life-cycle for many children who are unfortunate enough to be born in countries where child protection is a concept alien to the state. The video is a slap on our face – it mocks our disgusting sense of social responsibility, our failing social protection system and our indifference to the poor children of our own countries who spend their time not in school, but collecting garbage and doing drugs.

So of course we would, ironically, find this hilarious. Until I watched this video, these kids were a mystery to me. However, now I understand the root of some of the major ills in our society.

Just take another look at Kamlesh – his hands, his clothes, his eyes and the high from his drug – he appears to be just another “ganda bacha” (dirty kid), the kind our parents would point out to while we drove to school in our cars. This child is a human being first and then a citizen of India, as much as Shah Rukh Khan or Amitabh Bachchan are citizens of India. Then why is he, and other children like him, so drastically failed by the system?

Society has become sick, when this child #Kamlesh was shown having drugs instead of trying to help him people started making fun of him. Guys u r grown up well, now it's his time, help childrens like him to be in a better society, let's make this #ChildrensDay better than before pic.twitter.com/0cI7dbKGtO

I watched this video and honestly, for an entire hour afterwards, I couldn’t shake the thought that I could be in Kamlesh’s place. The only thing that stands between me and Kamlesh is a streak of good luck – of being born in a privileged family where I could inherit enough resources that would render running away from home an inconvenient option. Had I been born in a slum, without the basic system of my family to protect me and provide for me, I would perhaps choose to do what Kamlesh and other kids like him are doing today.

It is funny that in Karachi, we have agencies that are focusing on catching street dogs, yet at the same time, we are ignoring the street kids. Street kids are quite like street dogs, in that they both eat from the garbage and roam the streets until they eventually die there and only then might someone take notice of them. The dog, however, is a ‘problem’ taken care of by the agencies, whereas these kids will face a life of being either humiliated or ignored by the rest of us.

Yes, there are Edhi centres and other charity organisations that try to help street kids, but there are simply many more kids out there who are left to beg and collect garbage for their survival. We are willing to spend billions on weapons, trillions on performing Hajj and Umrah, yet in the past 70 years, we could not develop even a basic child protection system that could provide the street kid with even an opportunity to become a member of civil society.

Nationalism is not just about protecting your borders; it is also about providing protection and rights to any and all within the confines of the national border. Kamlesh is one example of a child in India, yet he is representative of a huge problem in South Asian society, and this video needs to be a reminder of how we at large are failing our children and instigate movements to help them. But in this endeavour, laughing at their plight and turning it into memes certainly doesn’t help.