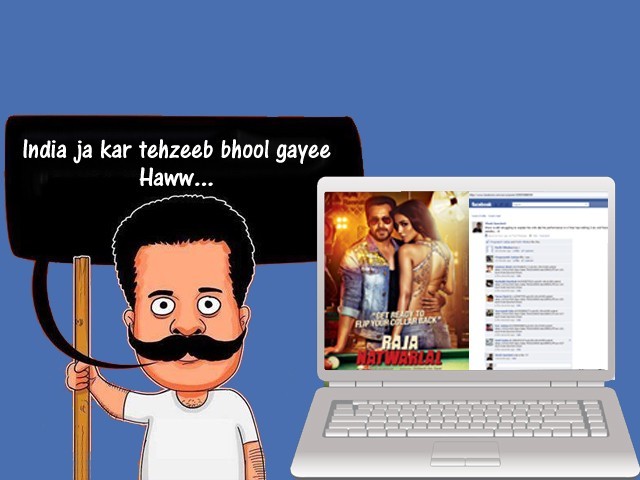 The comments ranged from discussions on the nuances of being half-naked, as opposed to being shirtless, to the dissection of each intimate scene in both movies.

“There is no hypocrisy in Pakistan; we just have completely different standards for men and women.”

The comment above summarises the general feedback I received on a meme I created, which went viral on Facebook last week. I hope the irony of that statement was not lost on them.

The idea behind the meme was to call out a population that was in an uproar about Humaima Malick crossing over to the tinsel town next door but was showing a general acceptance towards Fawad Khan doing the same. I am no moral authority to judge anyone’s behaviour but it is always fun to start a debate. Once the meme was in public domain, my opinion on the matter was irrelevant. The comments ranged from discussions on the nuances of being half-naked, as opposed to being shirtless, to the dissection of each intimate scene in both movies. I believe one person even did an analytical study on the distance maintained, or the lack thereof, between the protagonists.

Apart from some internet trolls, the general discussion on Facebook was fruitful, with a varying degree of opinions, till the big guns got involved. Pages like Pakium dot Com and Viral in Pakistan took the image from my page and reposted it on their pages, without permission or credit. My page has a mere 8,000 likes, which is nothing compared to the likes of 500,000 that Pakium dot Com enjoys. When the admin of that page stamped his moral authority on the subject, asking people to report the image as being against our nation, our culture and our religion, the floods of hate mail started filling my inbox.

The hate mail ranged from the usual ‘ghair parlaymani alfaaz’ (non-Parliamentary words) to tangible threats to my life, both virtual and physical. The online moral authorities had spoken. When the harassment failed to incite a response, the admin of Pakium dot Com, filed a false copyright infringement claim with Facebook claiming to represent Walt Disney Corporation. Facebook took down the content without so much as investigating the matter.

The old adage was inverted,

We are coming out in hordes on the streets against the ‘Gulu Butts’ of Pakistan but there resides a Gullu Butt in all of us. Those unable to wield sticks on the streets abuse the power of the internet. It is very easy to label anyone as being anti-state, just as people on television do not exercise any caution in doing so. Pages with clout on the internet are using their power to settle personal vendettas. They derive their authority from the number of likes on their page, the online equivalent of the ballot box. Without decrying Facebook dhandlee (rigging), I plead the virtual Gulu Butts to exercise caution. If they have a problem with an image or a person, engage in a meaningful dialogue rather than mob rule.

A lot of thought and effort goes into creating content for the internet. A meme going viral is a moment of pride for the creator. All that work should not be undone just because the content questions a person’s view of the world.