India’s Kashmir propaganda: A leaf out of Israel’s book – Part 1 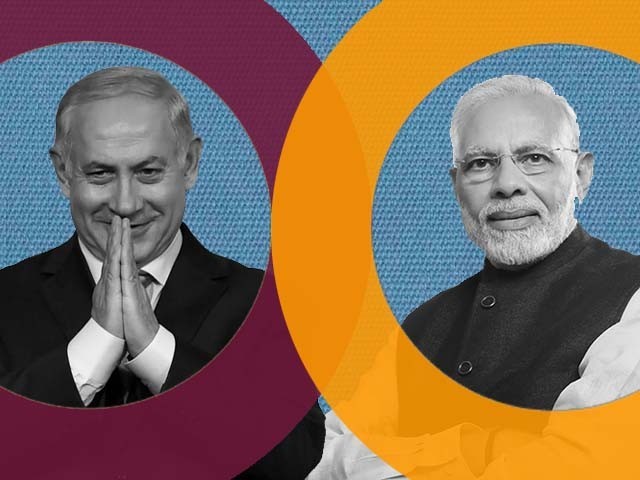 This article is the first in a two part series which adopts a historical perspective in order to analyse just how closely India’s actions in Kashmir over the years have mirrored Israel’s policies in Palestine.

Merely comparing the human-rights situation hasn’t ever sufficed, so let’s get down to the serious comparisons. The ruling Bharatiya Janata Party (BJP) leading India is clearly fond of Israel, but India, regardless of its ruling party, has been close to Israel in strategic terms for a long time. From Israeli support to India in wars against Pakistan to India’s status as Israel’s largest weapons market, Indo-Israeli ties are very intimate. The military-intelligence aspect even predates the official opening of diplomatic ties between the two in 1992, with Israeli military-intel support to India during its wars with China and Pakistan in the 60’s and 70’s.

Israel hosts Indian commandos for joint exercises in the Negev desert and values India as its largest weapons export market. Leftist journalist and filmmaker Andre Vltchek, while describing India’s inhumane occupation of Kashmir, spoke of Israel’s role in training Indian police and army officers posted in Indian-occupied Kashmir (IoK), and also about the Indo-Israeli as well as Indo-US joint exercises near the ceasefire line with Pakistani-administered Kashmir.

The similarities with Israel’s policies toward Palestinians have been pointed out many a time, but the true extent of the similarities of the origins of India and Israel’s brutal occupations is not often dwelled upon. Nor is the similar styles of propaganda used in the concealing or even promoting of the criminal state agendas and long-term policies of the two countries vis a vis Kashmir and Palestine. The similarities between Indian and Israeli discourse and propaganda on them make comparisons between the two going further back than just Narendra Modi’s bromance with Benjamin Netanyahu worth hearing.

Starting the story when they like it and obfuscating historical timelines

Zionists oft pretend that Israel achieved the additional territory it did in 1948 because it was ‘attacked’ by surrounding Arab states and forced to respond. The propaganda is surprisingly weak, considering that even in the mid twentieth century many could simply consult the relevant primary source literature and read about the ethnic cleansing of Palestine by Zionist paramilitaries, the logistics and methods of which were planned since as early as the late 1930s. Terrorism upon Arabs by Zionist paramilitaries was a feature of the 1940s and rose exponentially in the year 1947, marked with bombings and gruesome murders.

It may well be the disproportionate Zionist influence over Western print and electronic media which has led to a smugness on behalf of the hasbarists, who have added little to their brittle, false account of history. Regardless, Israel repeats the myth of self defence against the Arab boogeyman even today, expecting many naive folk to believe it always existed in Palestine and was attacked by ‘savage’ and ‘anti-Semitic’ Arabs.

Similarly, India seeks to shove beneath the carpet the events in the early days of its Kashmir dispute with Pakistan to make its conduct seem justified. Indian propaganda often states that its October 27, 1947 military intervention in Kashmir – one of numerous independent princely states which following the creation of Pakistan and India in August 1947 were mandated to make a choice of which country to accede to – was a response to a Pakistani ‘invasion’ and done at the invitation of the state of Jammu and Kashmir’s then Maharaja, Hari Singh of the Dogra clan.

However, preceding the October 22nd attack by Pakistani Pashtun tribesmen from the then North West Frontier Province of Pakistan was a communal massacre being enacted jointly by Singh and the Indians. The Times reported on August 10, 1948 that the genocide of 237,000 of Kashmir’s 70% Muslim majority, prior to the tribesmen’s attack, in the Jammu district turned them from majority there (61%) into a minority. According to Kashmiri historian Abdul Majid Zargar, Singh, in September 1947, requested military supplies from India to help quell dissent among Kashmiri Muslims, which led to 8,000 Indian troops being sent to him from the state, Patiala.

Others such as Sardar Ibrahim Khan, the first president of Azad Jammu and Kashmir (AJK), talked about anti-Muslim violence and Muslim resistance against Singh and his Indian backers emanating from Poonch, Jammu. Ibrahim, a politician of the Muslim Conference party of Jammu and Kashmir, which had passed its famous ‘Accession to Pakistan’ resolution a month before the creations of India and Pakistan, stated that Singh’s forces killed 500 Muslims in August 1947.

According to Zahirud Din, founding member of the Jammu and Kashmir Coalition of Civil Society (JKCCS), Singh’s prime minister Meher Chand Mahajan responded to Pakistan’s expression of concern on October 12, 1947 about violence against Muslims in Jammu and Kashmir with accusations that Pakistan was sending fighters into Kashmir. Using this as a pretext, the Singh regime threatened to seek ‘assistance’ from India, even though armed assistance for its criminal anti-Muslim activities was already present in the form of the Rashtriya Swayamsevak Sangh (RSS) forces and Patiala troops.

Collaborating with India to crack down upon the region’s Muslims and change its demographics violated Singh’s August 15, 1947 Standstill Agreement with Pakistan. Josef Korbel, Chair of the 1948 United Nations Commission for India and Pakistan, wrote in his 1954 book Danger in Kashmir that the Standstill Agreement had been drawn up by Singh as a means of deceiving Pakistan into believing he was neutral and trying to settle the accession issue in a balanced manner.

Sidelining the populations and going straight for the coveted land

The Balfour Declaration surely did not take the Palestinians on board when it decided a Jewish homeland had to be erected in Palestine. The active ethnic cleansing of Palestine turned to its armed, violent dimension mostly after the end of the Arab Revolt against the British (1936-39), but the Kashmiris were both having their right to self determination denied and being massacred while the Hindu Maharaja’s intrigues with the Hindu elite of Delhi progressed, before they launched an effective fightback.

Correspondence between India’s first prime minister, Jawaharlal Nehru, and his deputy, Vallabhai Patel, revealed the Indian state’s was cognisant of the fact that the Muslim majority under Singh’s rule would vote to join Pakistan as per the terms for plebiscite. A letter from Nehru to Patel also showed his knowledge of the fact that Singh was personally stoking communal agitation in Kashmir for a ‘zonal plebiscite’ in Jammu in the months leading up to the October massacre.

The aim of the massacre in Jammu in October 1947 was apparent; India and the Hindu Maharaja plotted to change Kashmir’s demographics in favour of the Hindus and only then wanted to hold a plebiscite. Nehru had even assured Pakistan of India’s commitment to holding a plebiscite in Kashmir. The promise, made as fighting in Kashmir was going on with Pakistani irregulars, tribesmen and Kashmiris from the even earlier Muslim-led Poonch rebellion, was never fulfilled. Put in context with Nehru’s inner circles’ intrigues in Jammu and Kashmir and involvement in the communal violence there, Nehru’s conniving ways and lies become apparent.

Lord Louis Mountbatten, last Viceroy of British India and first Governor General of the new Indian state, stated in a letter to Singh on the day of Indian troops’ landing in Srinagar on October 27, 1947:

“… in the case of any State where the issue of accession has been the subject of dispute, the question of accession should be decided in accordance with the wishes of the people of the State, it is my Government’s wish that as soon as law and order have been restored in Kashmir and her soil cleared of the invader the question of the State’s accession should be settled by a reference to the people.” (pp. 137, Kashmir: A Disputed Legacy)

However, Mountbatten was far from sincere in granting self-determination to the Muslims of Kashmir; he had overseen censorship of the reports coming to Delhi about the Kashmir massacres.