Is culling dogs the solution to Sindh’s rabies crisis? 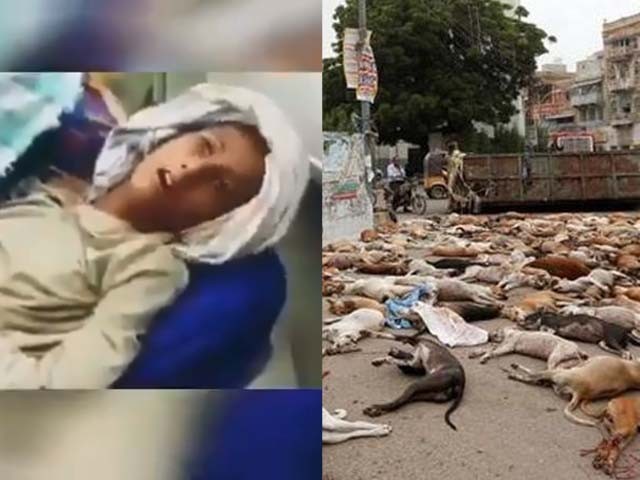 While reducing the stray dog population may be a small part of the solution, it is definitely not enough to solve Sindh’s burgeoning rabies problem.

Twelve-year-old Mir Hassan Abro died in the arms of his helpless mother last week because the hospital where he went for his treatment had no anti-rabies vaccines available. While Abro’s death is only the latest incident representing the poor state of affairs in Pakistan’s healthcare sector, it is also a stark reminder of the sheer volume of rabies cases which Sindh is afflicted with. The shortage of anti-rabies vaccines continues to compound and further aggravate a problem which could be resolved if the state and the provincial governments ensured that hospitals in Sindh were better equipped to deal with the growing number of these cases.

But before discussing the wider implications of the rabies epidemic, it is important to understand the specifics of Abro’s case and the manner in which a rabies case should be dealt with. Abro had been bitten by a rabid dog about five weeks ago, and two days before his agonising death, he had started to develop symptoms of fever, confusion and agitation. He was first taken to a hospital in Shikarpur where he could not be treated because of vaccine unavailability. Later that fateful day, as his condition continued to worsen, he was rushed to Shaheed Benazir Bhutto Hospital in Larkana, but there was no vaccine available there either, which led to him suffering from partial paralysis and hydrophobia (the fear of water).

A 10-year-old boy Mir Hassan, who was bitten by a stray dog, died of rabies in #Larkana in #Pakistan.
He breathed his last in his mother's lap. The incident shows the negligence of the #PTI govt towards the health sector as they are busy fueling #Kashmir issue. pic.twitter.com/EUvlwCXQQ4

What makes this all the more tragic is that rabies is a preventable viral illness. It is most often transmitted through the bite of a rabid animal; in Pakistan 99% of rabies cases are due to dog bites. Once the virus enters the body it travels to the brain through the nervous system and, depending on the site of entry, there is usually a one to three month interval between infection and onset of symptoms, referred to as the incubation period. Once in the brain, the virus replicates and causes inflammation leading to symptoms of fever, headache, confusion, agitation, insomnia, partial paralysis, hydrophobia and death.

Onset of symptoms invariably results in death, therefore Post-exposure Prophylaxis (PEP) consisting of Anti-Rabies Vaccine (ARV) and Rabies Immunoglobulin (RIG) should be administered as soon as possible after exposure and before the onset of symptoms.

In light of this, Abro’s tragic death could have been prevented if any of the several warning signs had been paid attention to and if the hospitals in question had rabies vaccines ready for usage. But the failure to provide these vaccines, and their shortage in Sindh, is all the more perplexing since the province is flooded with rabies cases.

One would imagine that the provincial government would have attempted to tackle this crisis much earlier. According to a Sindh health department report, in the first five months of this year nearly 70,000 dog-bite cases were reported in the province. In the first six months of this year, Jinnah Postgraduate Medical Center (JPMC) alone received approximately 6,000 cases of dog bites, compared to about 7,800 such cases in all of 2018. This alarming increase in the incidence occurred while there was an acute shortage of anti-rabies vaccine; according to some estimates Pakistan is short of 800,000 doses of the life-saving vaccine. Despite the frightening rise in incidents of dog bites and a critical shortage of ARV, the government has refused to acknowledge this long brewing crisis, and nothing substantial has been done.

Even after the bitter criticism levied against the government in the aftermath of Abro’s death, the Sindh government has failed to address the root cause of the problem, instead responding by writing to local government bodies to initiate a campaign for the culling of stray dogs. While reducing the stray dog population may be a small part of the solution, it is definitely not enough to solve Sindh’s burgeoning rabies problem.

Even a cursory review of the policies initiated by countries that have made significant strides towards minimising the burden of rabies will highlight the importance of public awareness campaigns and widespread availability of PEP. For example, Bangladesh decreased the number of rabies deaths by 50% between 2010 and 2013 by launching an extensive rabies elimination programme. There are several other success stories to learn from, such as the Philippines, South Africa and Tanzania; and all of them consistently highlight the importance of effective public awareness campaigns and access to PEP.

In the absence of adequate mass awareness campaigns and PEP availability, culling of stray dogs will do very little to solve Sindh’s rabies crisis, especially since culling dogs does not bring their numbers down,except in the short term. Therefore, the government must ensure the urgent procurement of cost-effective and efficacious ARV and RIG. At the same time, awareness campaigns aimed at informing the masses of rabies transmission, prevention, appropriate wound care and the need for urgent medical attention (before the onset of symptoms), should be launched. Without timely implementation of these measures, the children of a lesser god will continue to die at the hands of rabid dogs.

The run for allegiance: Electables and political parties – a marriage of convenience