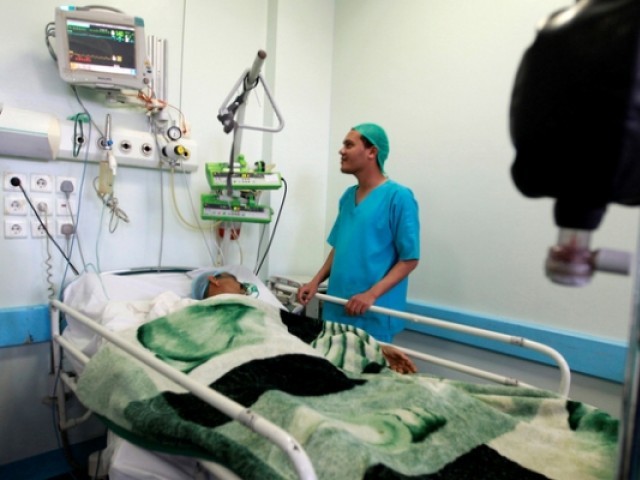 A doctor checks up on a patient at al-Thawrah hospital in Sanaa. PHOTO: AFP

Pakistan’s leaking public sector – led by politicians and a non-innovative bureaucracy –seem to be skimming the national kitty through dismal governance and service delivery.

The private health sector too appears to be focused on skinning poor patients, with no fear of accountability. This sector thrives off the inefficiency of and collusion with the state health institutions, which are best equipped but non-functional.

Recently, my 80-year-old father-in-law visited a neurologist for advice. He is currently in very good shape; no hypertension, no diabetes, gets up at five in the morning for his morning walk and sleeps soundly. He also scored 80% in his oral exercises. But lo and behold, the neurologist prescribed 10 tests for him including blood profile, MRI and what not.

Back in early 2012, two prominent cardiologists forced my 87-year-old grandfather to undergo angioplasty. They also asked about what quality of stents we would like for him. Later, I asked one of the surgeons whether angioplasty is advisable for humans above the age of 80, and the reply was a “no”.

“One is already on borrowed time, the artery is already too brittle to accept an alien body, so why torture the patient,” he explained.

But when I told him that he had signed off on the same procedure for my father at his hospital, he went speechless. My mother’s was a similar case; she nearly lost her life at another private hospital for the same reasons.

This reminds us of a video clip from Aamir Khan’s show where he talks about how pathological laboratories work. According to Khan, these labs offer up to 50% commission to referring doctors. In essence, these doctors charge patients a fee every time they visit them and also get a commission on laboratory tests.

This only highlights their unbridled greed and insensitivity towards their patients and nothing else. Oftentimes, these patients are poor with limited resources who cannot afford to cough up thousands for lab tests that are perhaps unnecessary.

I guess it’s safe to say there’s no morality or humanity in their profession.

While browsing for some medical content, I stumbled upon an article by Ritesh Kumar Singh titled ‘How Indian doctors and private hospitals are fleecing patients and corporates’. Although the article talks about some of the common tactics used by money-minded Indian doctors to cheat or fleece gullible patients of their hard-earned money, it aptly applies to medical professionals and hospitals in Pakistan as well.

Some of these money-minting tactics include:

– The doctor will say that you need an urgent operation or a complex expensive procedure when you don’t really need it. Most of us don’t argue with our doctors, and that is a perfect recipe for getting ripped off

– Gynaecologists at private hospitals are famous for forcing pregnant women to opt for C-sections, which costs more than normal deliveries

– Luring poor and uneducated people into donating organs, kidney in particular, for which there is a high demand and no dearth of customers who are willing to pay any amount.

I’m sure all of this sounds very familiar; how doctors, pathologists and surgeons rip through the pockets of patients literally at their mercy. Their prescriptions drive people into financial insolvency but they themselves get richer and fatter. This happens because the state has abdicated its primary responsibility of providing health insurance to all citizens. It hardly bothers about how wilfully the private health sector is buttering and fleecing people. As for the public health institutions, they provide infrastructural support for unscrupulous private health establishments and that too without paying taxes on the hefty dirty money they are making off these poor patients.

It is about time they are held accountable for manipulating patients and procedures, all the while spoiling the name of a profession people look up to all around the world.