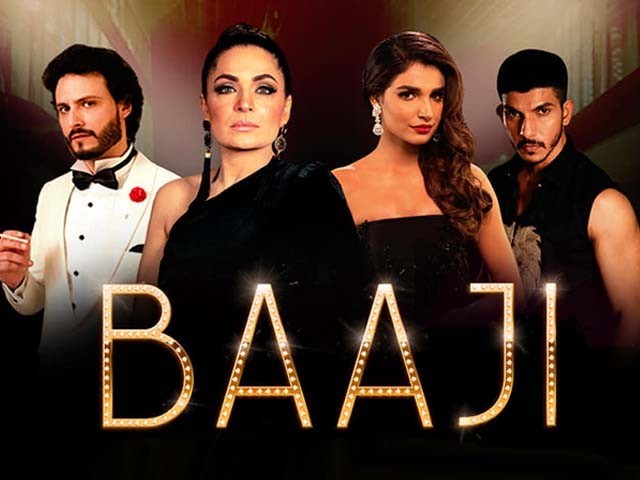 In a way, it’s a biopic. Pakistan has made a biopic about Meera. Let that sink in. PHOTO: FACEBOOK/ ARY FILMS

Does all that matter? No. it does not.

Saqib Malik has directed Baaji, surely the worst Pakistani film I have seen since the so-called ‘revival’ began. And that’s saying something given that I have seen Wrong Number, Maan Jao Na and Azaadi.

Baaji is suffering from an existential crisis. In a way, it’s Pakistan’s answer to Rajkumar Hirani’s film Sanju. Granted, Hirani will not understand this answer, but it is an answer nonetheless.

It shows the life of a misunderstood, troubled star, played by Meera, called Shameera (creative name, right?) and how things keep going wrong for her. It includes many real life events from Meera’s life, including the infamous video clips that went viral and the broken fake marriages.

In that way, it’s a biopic. Pakistan has made a biopic about Meera. Let that sink in.

Baaji is a film about the film industry, much like Om Shanti Om and Luck By Chance. It shows the process of filmmaking and gives insights into the industry – albeit rather bizarre insights. It shows how a Hollywood director (played by Osman Khalid Butt) casts a heroine (on a live TV show), how scripts are written (director acting the script out at his home with the secretary of the heroine only to be gate crashed by the heroine herself), how an actress chooses her secretary (her manicurist who is fired from her job), among many other things. And to cap it off, the previous directorial venture of Butt’s character is called ‘Thief of hearts’. Subtle.

If based on the trailers you thought Baaji was an ode to Lollywood, lo and behold, Baaji is actually a murder mystery. A primary character in the film is murdered and someone is framed. There is a disappearance, there is a con-man, there is an antagonist firing guns and there are sidekicks plotting murders and heists. Of course, there is also a kind-hearted lawyer who shows up out of nowhere to solve the case in less than five minutes.

In reality though, Baaji isn’t any of that. It is actually a story of an ambitious young girl, with a heart of gold, looking to make it big and provide for her family, a family in which her conservative brother keeps asking her for rickshaw installment money and hits her when she raises her voice at him. The brother then transforms and becomes supportive in the end. How? We don’t know. We don’t need to. The innocent girl is fired from her job as a manicurist, then becomes Shameera’s secretary, makes it big, is fired again and within a week reaches a point where she has to sell her cell phone to get food. She is so innocent that a random strangers ask her to sit in his car because he knows her name, she gets in. He takes her to a shady hotel where she meets another shady photographer who offers her hash which she smokes without saying a word.

Baaji proves one thing though: Malik is a very likeable person and has a lot of friends who were willing to work in his film. The film has cameos but no plot. Humayun Saeed, Yasir Hussain, Tapu Javeri, Tariq Amin, Frieha Altaf, all make an appearance. This is the kind of solidarity and support Malik needed, particularly since he has Meera and Butt acting in the film. A director asking Butt to act is an ambitious task as it is. It’s like expecting Ali Hamza to produce music of Rohail’s Hyatt’s quality, or expecting Shahid Afridi to bat like Rahul Dravid. It can happen but we all know it won’t.

Baaji is atrociously directed, horribly acted and ridiculously written. It’s not a film. It’s a joke. A joke nobody laughs at. It’s an ideal candidate for the next video of pretentious movie reviews by ‘Biswa and Kanan.’ In one scene, the host Begum Nawazish Ali asks Butt’s charcter why he came back to Pakistan and he replies:

Malik probably expected an emotional clap, but all the audience gave was mocking laughter. We all love Pakistan, but nobody should support Pakistani cinema by supporting bad content. Paying to watch Baaji should be criminalised. If you are being paid to watch it, still avoid it.