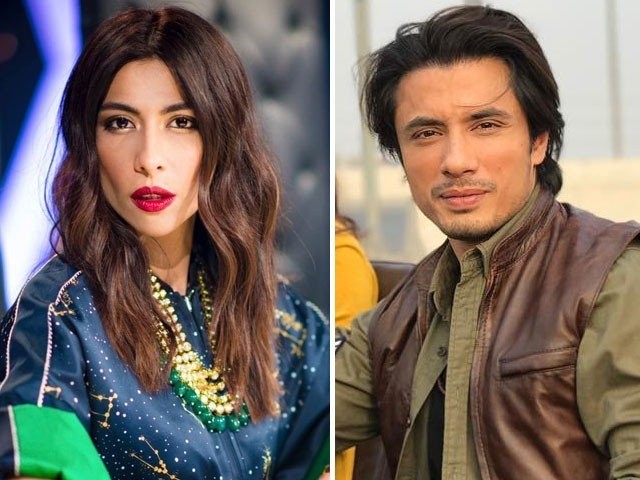 Anyone who has blindly believed Zafar as he claims innocence is sadly mistaken.

This week saw yet another development in Pakistan’s first #MeToo case: Ali Zafar spoke directly to the media for the first time since he filed a defamation case against Meesha Shafi for accusing him of sexual harassment.

Zafar confidently told the media that Meesha’s case has been dismissed and he has been proven innocent by the court of law. This is blatantly untrue. In fact, it is a vicious way of misleading common people who are unaware of legal proceedings and only believe what they hear Zafar say on the news.

What is actually happening?

Firstly, according to Nighat Dad’s statement, Zafar has not been exonerated by any forum and Shafi’s case is still pending in the Lahore High Court. Shafi had initially lodged her complaint with the Federal Ombudsperson since the case was identified under The Protection against Harassment of Women at the Workplace Act 2010. The case was indeed dismissed at this level, not due to the merits of the actual accusation but due to a lack of jurisdiction. In short, anyone who has blindly believed Zafar as he claims innocence is sadly mistaken.

A legal notice has been served to @AliZafarsays against his false, malicious and defamatory statements against our client @itsmeeshashafi on multiple National TV channels. #MeToo pic.twitter.com/1ofo1KNhDb

Why bring in Malala?

If we needed further proof of the kind of person Zafar is, we got it when he dragged Malala into this personal fiasco for no reason at all. Yes, many Pakistanis hate Malala, but him suggesting that Shafi is doing this for fame and then implying what happened to Malala was also an attempt to gain international recognition makes it very clear that Zafar has no shame and is willing to throw women under the bus to further his “personal gains”, which is ironically what he is accusing Shafi of doing.

So Ali Zafar thinks Meesha Shafi's sexual harassment allegations against him are for a Canadian immigration and that she wants to become Malala? Absolutely, shameless this man is. #MeToo pic.twitter.com/Y6yipjLRJj

Did Ali Zafar really try using Malala as an insult. Sweetie, she's 21, won the Nobel, works on education programmes in 7 countries, spoke at the UN, prompted the passing of the Right to Education bill. All you've done is sing terrible songs and harass women. Sit down.

Woke up this morning to see Mister Ali Zafar sounding like Pervez Musharraf. Deadbeat Pakistani nationalistic misogyny- Throw in all the buzzwords 'immigration', 'international attention', 'Malala' and you're there.

Does Shafi need the recognition?

It is no secret that Shafi is already an acclaimed artist and belongs to a fairly famous family, so Zafar’s implication that she did this for international recognition can be proven false yet again. Why would Shafi do this for fame when she already had it, and is arguably worse off now?

We can also not overlook that there exist multiple women apart from Shafi who have accused Zafar of the same. I have been told by a close and reliable source that there is reportedly a lengthy list of women who have confessed long and horrendous accounts, and that too in detail, of what they faced at the hands of this man. He’s allegedly made advances on his wife’s friends, who have also openly disclosed their experiences after Shafi did.

Why is Zafar digging himself into a deeper hole?

Zafar has by now given multiple interviews to try and salvage his reputation. It is interesting to note that he chose to bring along his awards and sit in front of a religious text; as if his acting wasn’t on the nose enough. This is an obvious sympathy tactic to try and show himself to be a devout Muslim and a successful artist. Zafar crying on TV only made things worse, reminding us of other accused like R Kelly and Brett Kavanaugh who cried to gain public sympathy but only became the butt of jokes.

I don't understand how there can be a water crisis when there's all these male tears to harness https://t.co/JwO4igd1hu

Ali Zafar shedding crocodile tears on TV to earn sympathy votes instead got turned into a meme is the kind of Twitter usage we all need.

Remember that women will always hold the responsibility of being the ‘stable’ ones in order to be taken seriously.

Zafar also stated he knows harassment against women is a growing reality in Pakistan and is willing to combat it by creating an organisation that will be able to protect victims. My question is: how will Zafar require these women prove their allegations? If someone as influential and privileged as Shafi is constantly fighting, how do other women expect to be believed? And which woman will trust him or his organisation?

Meanwhile, in another attempt to gain sympathy, Zafar went on a show and brought his wife along with him this time instead of his trophies. He then made a mind-blowing argument: if a man like him did not bother harassing any “haseen” Bollywood actresses, why would he out of all people choose Shafi? Of course both men found this concept to be hilarious, but as a woman watching him on screen, this statement is simply more proof working against Zafar.

So Ali Zafar brought his wife to a tv show. There is a lesson for all of us girls here. Men don't give a shitt about you and mostly use you as a prop. If he really cared about his family he would have kept them away from this mess.
Study hard and get that degree. Screw men.

After all, he made this comment while his wife, Ayesha Fazli, was sitting right next to him. But then Fazli made things worse when she, despite barely speaking throughout the interview, chose this moment to interject and agree with him, stating,

“Out of all of the opportunities he would have, he would only choose these bloggers and these women?”

In other words, both Zafar and his wife believe some women are ‘worthy of harassment’ and others aren’t, based on how they look.

The filth in this country never seizes to amaze me https://t.co/TSPXCzn6p7

Proof that Ali Zafar & his wife think harassing women is an opportunity. https://t.co/lpXzs6k1i0

Out of all the statements Zafar has made this week, I find this one to be the most hurtful and upsetting. Suggesting harassment is dependent upon a woman’s looks is comparable to stating a woman’s clothes are responsible for rape. This clearly reveals the kind of mindset that prevails in our misogynist society, and to see Zafar and his supporters normalise this kind of thinking is what scares me the most. As a woman, if I decide to come out with my experiences of harassment, I now have to worry if people will find me worthy of it? Will my story be more or less believable depending on how attractive I am? If that is the case, I seriously fear for the women who have been victims of sexual assault and violence.

If you felt that Ali Zafar was innocent or you were "neutral" over the issue till now, surely since his media blitz you can at least see that he has a super toxic attitude towards women. The jibe about Malala, about how he didn't harass hotter women, his lies about the case…

there are more victims??? weird flex but okay https://t.co/yUjGUpnV2V

Why can’t Zafar take a page out of Shafi’s book?

In comparison, Shafi’s only interview thus far was refreshing. Unlike Zafar, she did not need to bring any unnecessary add-ons or highlight her success and fame. She was composed, held her ground and presented her facts with dignity, without any fake tears.

Things Meesha Shafi did in this interview:
– Speak up for other women
– Highlighted flaws in harassment laws
– Highlighted importance of talking to children about abuse
– Highlighted mental health
– Called out toxic social scene

The growing movement of support emerging for Shafi is proof that her dignified response had a lot more impact than whatever Zafar tried to do. There are of course the people boycotting the Lux Style Awards (LSA) for nominating Zafar. As a PR executive, I have a consistent working relationship with self-made, hardworking personalities in the fashion industry, and it makes me proud to stand in solidarity with Shafi, Eman Suleman, and all the others who have taken this step at a time when there is a dire need to hold the accused accountable.

Also, would @Unilever and @LuxStylePk like to explain why on one hand they claim to support their jury in the statement they released, and on the other also support ali while he attacks the same jury? Does your hypocrisy know any bounds?

As role models, artists have the responsibility of inspiring their fans and followers by standing up for the right cause, and this is exactly what these people have done. If a platform like the LSA continues to celebrate and reward harassers, it should no longer expect to retain the respect it has maintained thus far.

On the other hand, all Zafar’s supporters can talk about is how Shafi looks and why she hasn’t show up in court. Here is a woman trying to get justice in a country famous for failing its wronged, but what we as a nation appreciate is a man crying crocodile tears on TV and cracking jokes about how the woman is not attractive enough to harass. This must mean he is innocent!

So Asia bibi was declared kafir even before the verdict but Ali Zafar is innocent until proven guilty?

Shafi has not been summoned to court, which is why there is no point in her showing up when her legal team can do the job they were hired to do in the first place. People who are assuming Shafi has been hiding due to guilt need only see the way she carries herself in the only time she addresses the public.

Ok taking a break from twitter now not because I’m getting mercilessly bullied and slandered… I took it last year, I can take it this year too. What doesn’t kill you makes you stronger.
But because…. @GameOfThrones spoilers! 🙏🏼

As a country we are famous for failing our women, and at this point in time it feels like Meesha Shafi’s case will be no different.