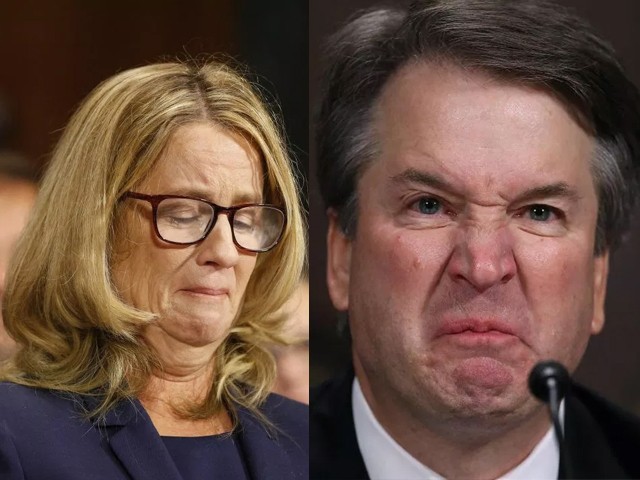 Kavanaugh testified on Thursday, so did Ford, both their testimonies were compelling, but in my opinion Kavanaugh appears guilty as charged.

Christine Blasey Ford recently accused an attorney and a sitting judge of the United States Court of Appeals for the District of Columbia Circuit, Brett Kavanaugh, of sexually assaulting her in the early 80s, when they were both in high school. Kavanaugh was nominated for a position in the Supreme Court by Donald Trump and after finding out that her perpetrator may go on to be a part of the top court, her civic duty compelled her to bring her past into the spotlight.

The Senate held a hearing for this purpose, to decide whether or not Ford’s allegations hold some truth. Kavanaugh testified on Thursday, so did Ford, both their testimonies were compelling, but in my opinion, Kavanaugh appears guilty as charged.

Because being a model student, star athlete and an assaulter are not mutually exclusive. A person can be both, and be very effective (at both) all at once.

Judge Kavanaugh came swinging and punching. He defended his public record. He spoke about his numerous achievements in school and college, he talked about being a coaching dad, called his wife, Ashley Kavanaugh, his rock, talked about his respectful, close and platonic relationship with countless women, and his mentor-like and nurturing role of hiring young women as law clerks. But all the while he spoke of his many accomplishments, and undeniably there are many, he could not effectively refute the accusations made by Ford.

The 40-minute long monologue by Judge Kavanaugh was repetitive and dramatic; he was openly emotional, almost desperate in his tone when talking about his public service and personal life. He was compelling; almost to the point where the audience felt they were watching an episode of House Of Cards, West Wing, or a courtroom drama from 16th century England.

And then began the question-answer session. When the Democratic senators on the judiciary committee asked questions of the judge, he was combative, belligerent and evasive. Each time he was asked if he (Judge Kavanuagh) was so sure of his innocence, then why not support an FBI investigation and clear his good name altogether. He was asked this question countless times. The first time he stumbled on his words, usually like a liar does, and then progressively became more aggressive and evaded the question, and instead referred to his public service, private life, academic laurels and athletic prowess yet again.

He was not a perfect witness, and for anyone looking for the truth, he appeared guilty and a liar.

Guilt and fear is an awful thing, it creeps on one like Banquos’s ghost (the ghost from Macbeth). Guilty people have an air about them, their eyes show it once they are caught, and sometimes their guilt escapes their lips in the form of words. Guilt is palpable, it’s unmistakable!

What was most troublesome to watch was the many layers of wrong, right, truth and lies, and then to rummage through the many layers. The American public wasn’t watching to judge him for drunkenness in high school.

Yes, good people do awful things when they are drunk, and add to that an underage hormonal teenager.

Yes, decent teenagers do stupid things when they are young, and can turn out to be model citizens. The whole world is made up of them.

Yes, committing sexual assault is an absolutely abhorrent crime, in a state of drunkenness or sobriety, regardless of the assaulter being a teenager or an adult.

But these truths are not under discussion here.

What’s under discussion are the lies the judge is telling, and the way he is rushing to move forward his confirmation in the Supreme Court.

Ford was credible, real, authentic and human, and on top of that, she was respectful too. The Republican senators did maintain decent optics, I do not think she felt bullied, and we, the audience, felt that she was treated with courtesy and respect. That until now seemed to be the only saving grace from the hearing, but as I was getting ready to file this blog, a new development emerged.

“I’ve ordered the FBI to conduct a supplemental investigation to update Judge Kavanaugh’s file,” Trump said in a statement. “As the Senate has requested, this update must be limited in scope and completed in less than one week.”

Why this change? It happened because in true democracies, shouting and hurting protestors and citizens are actually heard. It was a moment out of a Shakespearean play; two women protestors spoke to Senator Jeff Flake, and in a moment made history.

The delay was the result of a last-minute change of heart by Senator of Arizona, Flake, whose stunning move to force an investigation was quickly backed by several senators, considered swing votes on Kavanaugh’s confirmation.

The Kavanaugh headlines have thrown the sexual assault debate in the forefront. I’ve had countless discussions on it, and the truth is that society and nature not only allow men to violate women physically (such as in the Bill Cosby and Kavanaugh cases), but verbally too, where the response they have to any losing argument, or reasonable and serious conversation is sexual insults!

I firmly believe that as responsible parents and keepers of the next generation, we have a monumental responsibility to raise children who understand sexual assault and sexual disrespect, and understand that there are consequences for bad behaviour. And today, that is exactly what the protestors said to Senator Flake.

Don’t send an assaulter to the Supreme Court bench!

It is more important to raise boys who respect women, rather than only focus on teaching girls to protect themselves. Why is it that society only focuses on the latter?

Boys must be taught to respect girls from a young age; they must be told that if it’s disrespectful to your mother and sister, it’s disrespectful to other women. Do not berate your female acquaintances, and do not refer to them as sexual objects, because that will translate to you verbally or physically (sexually) abusing your wife.

Always remember that when a man is being sexually inappropriate, it’s his fault, not yours! Call him out, and be intellectually aware that he’s weak and that’s why he’s putting you down. Always tell people about it.

I know many good men, courageous, respectful and strong, who never feel the need to sexually berate someone when arguing with them. They are secure in their masculinity. These are the sons, fathers, husbands, brothers, friends and decent men in society.

These are men who elevate women because they know the value of the womb, the womb that nurtured them to birth and after. These are the many good men and more! We need more of these men, not more of Kavanaughs.