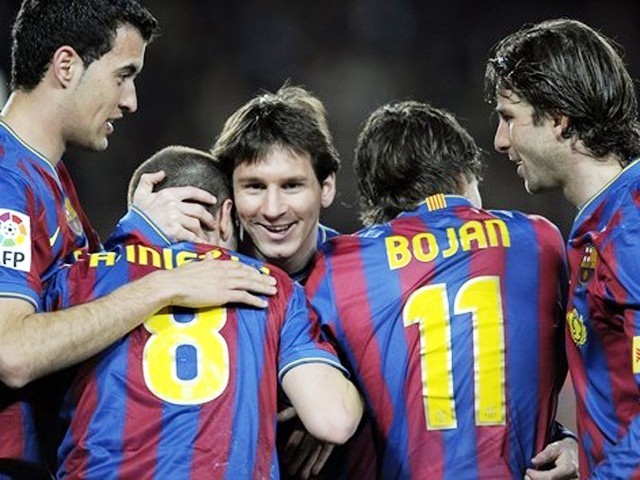 The current Barcelona team is up there with the greatest ever club sides in football. PHOTO: AFP

When Pep Guardiola took over from Frank Rijkaard as manager of Barcelona in the summer of 2008, surely even he did not expect to gain such phenomenal success with the Catalan club. After all, here was a youthful former Barcelona player in his late 30s with only one year of managerial experience; that too with Barcelona’s reserve team. Here was a man taking on the mantle of one of the most demanding jobs in football.

Fast forward three years and you have a manager whose team has left everyone short of superlatives. Yes, the football may be influenced by the Dutch legend Johan Cruyff rather than a Spaniard, but here we have a modern football superpower.

It might be inaccurate to compare different generations of great sides to one another but one can’t help but feel that this Barcelona team is up there with the greatest ever club sides in football.

It was Barcelona’s bitter rivals, Real Madrid that had the honour of the first truly great club side. The inaugural year of the European Cup (its original name before being revamped into the Champions League) was the first of five consecutive seasons between 1955/56 and 1959/60 which saw ‘Los Blancos’ crowned as champions of Europe, with the pinnacle being the all-time classic 1960 final against Eintracht Frankfurt in Glasgow, Scotland where the German side was thrashed 7-3. The likes of Alfredo Di Stefano and Ferenc Puskas inspired the team at a time when most teams were still getting to grips of this new and wonderful European competition. Small wonder then that Real Madrid was still able to wait 32 years (after another triumph in 1966) before it won this competition again and was still in the meantime not overtaken as the most successful team in Europe.

The end of Real’s reign

Then came the swinging 60s which saw the likes of Benfica and Manchester United dazzle the football world with their attacking style of football. 1961 was the year Real Madrid’s monopoly of the European Cup was finally ended when Barcelona themselves knocked the Bernabeu outfit out in the first round. However, the men in blue and red stripes were defeated by Benfica 3-2 in the final. This was the first of five finals Benfica reached that decade in the space of 8 years. More impressively, on their part, the 1961 victory was achieved before the arrival of the legendary Portuguese striker Eusebio.

The following year, the Lisbon team defeated Real Madrid 5-3 despite a hatrick from Ferenc Puskas. Eusebio himself scored a double in that game. 1963 saw Eusebio score again but Jose Altafini scored two for AC Milan at Wembley who secured the first of their seven European Cup triumphs. By now though, Bela Guttman,the legendary Hungarian who remains the only manager to have won both the Copa Libertadores and the European Cup, had left and two years later were beaten by other team from Milan- Inter Milan – at the San Siro itself. Until 2010, this was to be Inter Milan’s last European Cup triumph in an era when they became known as ‘Grande Inter’.

The end of the glory era of Benfica in the 1960s coincided with the culmination of the greatest achievement of the pre-Ferguson era for Manchester United. Having seen eight of their players die in a plane crash in Munich in February 1958, while returning from a European Cup quarter-final in Belgrade, manager Matt Busby rebuilt the team to have another crack at Europe. In the quarter-final of the European Cup in 1966, United thrashed Benfica 5-1 in Lisbon – the latter’s heaviest defeat in Europe by a mile- and a star was born. The Portuguese media christened winger George Best ‘El Beatle’ after a stunning performance in that game. Despite losing in the semi-final that year, United were not discouraged and finally won the competition in 1968 after beating Eusebio and Benfica 4-1 in the final at Wembley. Matt Busby had realized his dream ten years after nearly being killed himself in the plane crash.

The early to mid-70s were dominated by Ajax and Bayern Munich. Ajax had become the first Dutch team to reach the final of Europe’s premier competition in 1969 but were comprehensively beaten 4-1 by AC Milan. However, under the management of ‘Iron Rinus’ Michels, the famous philosophy of ‘total football’ was developed and 1971 saw the Amsterdam club become kings of Europe. Michels had nurtured the talent of the incredible Johan Cruyff and despite the departure of Michels(who ironically enough took over as manager of Barcelona), Ajax retained the trophy in 1972 with Cruyff scored both goals in a 2-0 victory over Greek side Panathanaikos. Amazingly, the trophy was lifted for a third consecutive season when the mercurial Johnny Rep got the winning goal against Juventus in the 1973 final that was played in Belgrade.

German giants Bayern Munich were the next to enjoy a glorious era when they too won the European Cup three years in a row between 1974 and 1976. Bayern’s team of that era consisted of players that are still regarded as some of the greatest players ever to grace the game: Sepp Maier in goal known for his fast reflexes, Frank Beckenbauer is arguably the most cultured and graceful defender in football and Gerd Muller; the 1970s version of the predatory goalscorers we’ve seen more recently like Inzaghi and Van Nistelrooy.

Liverpool then became the second English team to win the European Cup after beating Borussia Monchengladbach 3-1 in the final in 1977. Kenny Dalglish- the current club manager- then scored the winning goal the following year against Club Brugge. The Merseysiders employed a creative midfield of which Dalglish was pivotal to back up a strike-force of Steve Heighway and John Toshack with a solid defence of which Alan Hansen was the key figure. Together, this magnificent team won 4 European Cups between 1977 and 1984 along with sweeping several domestic honours in that period.

AC Milan’s amazing team of the late 80s and early 90s cannot be forgotten for their pressing game which was actually similar to today’s Barcelona with constant short passing in midfield. Another similarity with Barcelona here was the influence of Dutchmen. Just like Barcelona’s playing style and philosophy is heavily influenced by Johan Cruyff, Milan’s team here was centred on the troika of Rijkaard, Gullit and Van Basten. The Italian giants duly lifted the coveted prize three more times between 1988 and 1994 and also went on an amazing unbeaten run of 58 league games between May 1991 and March 1993.

Fellow Italian giants Juventus made a terrific team in the mid 90s to fill the void left by their rivals with a well-knit side that had a solid back-line and a frightening attack with Deschamps and Zidane pulling the strings in the middle and Del Piero bombarding the opposing defence constantly to help the Turin side reach the European Cup final three times in a row between 1996 and 1998.

Real Madrid’s ‘Galacticos’ of the early 2000s disbanded much too quickly to be regarded as legendary after constant changes in managers and a small squad size to complement injuries and suspensions.

Around half a decade went by with no club truly establishing a foothold on the biggest stage in Europe.

Until the 2008-09 season that is. Guardiola’s first season was phenomenal. Ronaldinho, Thuram, Edmilson, Deco and Zambrotta all departed and were not missed one bit. Instead the forward line started scoring goals for fun with a whopping tally of 105 in the league alone that season. Messi took over from Ronaldo as the world’s best player and after winning both the Spanish League and Spanish Cup comprehensively, it was the 2-0 triumph over Manchester United in the European Cup final that year that really made people take notice of this remarkable team. 2010 and 2011 were both vintage years in the league too and the icing on the cake was placed when the 3-1 victory against United again in the 2011 European Cup final made people come to the conclusion that this is truly one of the greatest teams of all time.

It is difficult to discard this Barcelona team when you consider all the evidence in front of you. Almost every game sees them retain an overwhelming majority of possession and in every game-even if on a rare occasion they are not winning- they maintain the same style of play that eventually sees them get back in the game. It is very difficult to find a better central midfield partnership in the world at the moment and indeed across generations than Xavi and Iniesta. What’s more is that this is not a team funded by the millions from which Chelsea and Manchester City benefit; this is a team that almost completely consists of homegrown players who have been rigorously taught to play ‘the Barcelona way’.

Every team goes through cycles of glory and at the moment there is little to indicate that Barcelona’s cycle of glory will end anytime soon. Based on their performances over the last three years and the youth setup they have in place, it would require a superhuman effort –in any competition, at any venue and with any set of players- in the near future.