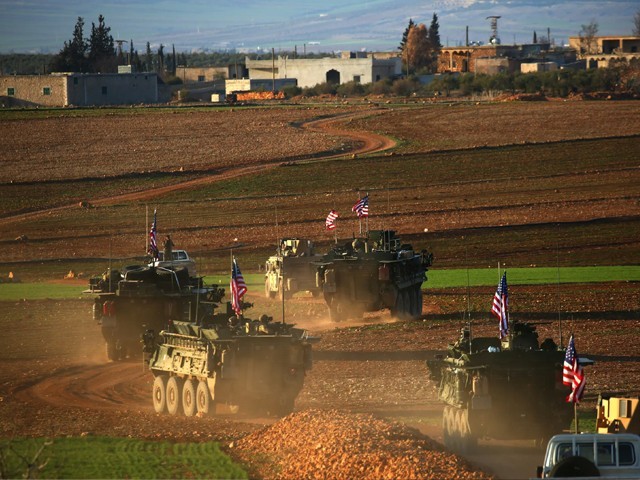 A convoy of US forces armoured vehicles drives near the village of Yalanli, on the western outskirts of the northern Syrian city of Manbij, on March 5, 2017. PHOTO: AFP

Not too long ago, US President Donald Trump shocked the world when he made the announcement that just this once, the US would decide to act in accordance with international law. The announcement in question was that US troops stationed in Syria would now be returning home to their families.

This declaration in turn shocked what has become a war-loving media that never once questioned America’s military presence in a sovereign nation to begin with.

Not many Americans appear to know this (nor do they appear to care, by some accounts) but the US military has occupied approximately one third of Syria for some time now. Conveniently, the US military appeared to have its heart set around Syria’s most oil-rich region, though I suspect this is just a coincidence.

I was surprised to learn my country now occupies one third of Syria. At least they let us know after the fact. https://t.co/d6UkVPAVp8

The presence of the US military in Syria is, by all accounts, completely illegal under international law. Syria has not attacked the US, and even if the Islamic State (IS) had, the American military could not enter Syrian territory without the permission of the Syrian government (which still occupies the Syrian seat at the United Nations).

The only real argument that could potentially justify US military presence in Syria is if the Syrian government was unwilling or unable to combat IS militants, or if the Syrian government had lost its sovereignty due to its alleged actions. You can see how this would be tricky territory, given all of Washington’s allies in the regions are most likely guilty of some of the greatest crimes against humanity.

The ‘unwilling’ and ‘unable’ argument was turned on its head when the London-based Jane Terrorism and Insurgency Centre released a report, which found that between April 1, 2016 and March 31, 2017, 43% of IS’s battles were fought against the Syrian government and its allies, making them the entity most engaged in fighting IS.

Therefore, the removal of US troops from Syria, despite even the opinions of some of the most highly respected public intellectuals, would, for a change, put the US military in accordance with international law. Whether or not this would be an action that plunges the region into chaos is something that remains to be seen, though that would still not justify an illegal military presence that should never have occurred to begin with. Think back to all the neoconservative hawks who argued the US pulled its troops out of Iraq too early, and the chaos that ensued Iraq in the years to follow.

Can someone informed explain: for Chomsky to call US forces the lone deterrent to a massacre of Kurds, he must rule out Kurds cutting a deal w/ Assad/Russia. What underpins this assumption? That Assad won't tolerate a Kurdish enclave? That Russia would welcome a Turkish attack? https://t.co/rhczxGnIgL

While a US troop withdrawal may pave the way for a Turkish-sponsored bloodbath of Kurdish militants, given Turkey has not only enabled the IS but has spent most of its energy on bombing Kurdish positions, one thing I can say with some certainty is that it would in no way, shape or form, embolden the IS.

As referred to above, the Syrian government and its allies appear to be coping just fine without the help of the US military, which has openly stated that the real reason for its presence in Syria is to counter Iranian expansion, and not the IS. Furthermore, the US has played a ridiculous cat-and-mouse game with the IS from the get-go, including a secret deal in which it allowed thousands of IS militants to flee Raqqa and head on to the next (conveniently oil-rich) location that the US wanted to bomb and claim for itself. In the process, the US military destroyed over 80% of Raqqa – hardly a force of stabilisation.

As it turns out, we may never know what will happen if the US completely pulls its military presence out of Syria. For one, there are already strong indications that the Trump administration may begin privatising its wars instead, enlisting the help of very lucrative military contractors in the process.

Secondly, Trump’s national security advisor John Bolton already publicly overrode the president’s remarks, stating that the US would only pull out of Syria if certain conditions were met. These conditions largely included protection for Kurdish fighters, who would face possible onslaught from Turkey if the US removed its military.

Unsurprisingly, this in turn infuriated Turkish President Recep Tayyip Erdogan, who called Bolton’s statement “a serious mistake”. Bolton made his remarks while in Israel, and it did appear as though Bolton was trying to appease Israeli Prime Minister Benjamin Netanyahu, who is clearly concerned that the hole left by the US military will only strengthen Iran’s presence in Syria, irking Israel in the process.

The blunt truth of the matter can be found somewhere in the middle. According to the Middle East Eye (MEE), a secret meeting held in a Gulf capital last month saw senior intelligence officials from Saudi Arabia, the UAE, Egypt and Israel, including the director of Mossad, create a secret initiative. According to MEE’s sources, the officials came to an agreement that they now considered Turkey, not Iran, to be their major military rival in the region, and discussed plans to counter Turkey’s influence.

One of the measures discussed in the meeting was to create a so-called rehabilitation process for Syria’s Bashar al Assad, which would allow him to join the Arab League. The Arab League would then strengthen its support for Damascus in order to oppose Ankara’s military presence in northern Syria. Another unsurprising measure was to provide support for the Kurds, including in Iraq’s Kurdistan Regional Government (KRG), to further push against Turkey.

In this context, Bolton’s conditional statement – that the US will only pull its military out of Syria when there are assurances of the protection of the Kurdish militia, as well as on the perceived Iranian threat on Israel’s border with Syria – suddenly begins to make a lot more sense.