If Sridevi gets more coverage than Syria, that is your fault, not the media’s 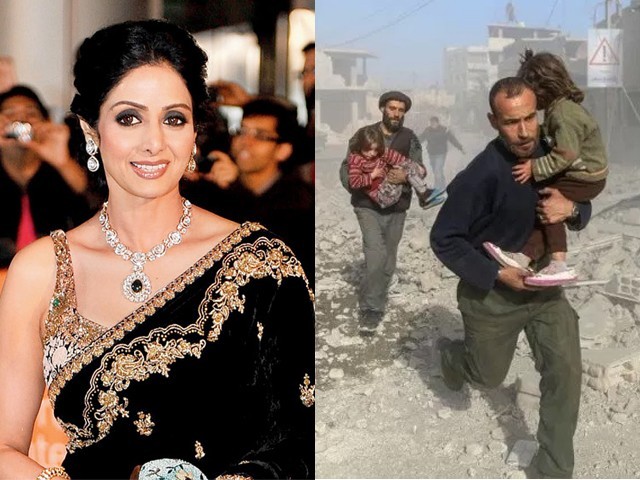 For Pakistanis, Syria only became a relevant topic to discuss in light of what happened to Sridevi.

Pakistanis are a dissatisfied nation. On a superficial level, they care a lot about issues affecting the Muslim world and want to highlight the injustices being faced by Muslims all over the world. However, this concern usually seems to be a reaction to attention received by other issues.

Take for instance, the two recent incidents that occured simultaneously and divided opinions yet again. On the one hand, Syria was being bombed; hundreds of civilians killed as a ceasefire was ignored and hospitals were under attack as well. On the other, Bollywood superstar Sridevi breathed her last, and the events surrounding her death took over the news cycle not only in India, but also in Pakistan, where she was equally beloved.

This led to a tricky situation, where the coverage provided to Sridevi’s death and its subsequent investigation dominated the news coverage, leading to Pakistanis complaining that Syria was not being talked about or provided enough coverage. There is no denying that Sridevi’s death got a lot of coverage, perhaps too much coverage, while the atrocities in Syria are undoubtedly symbolic of the lowest point in humanity in an era of international organisations and cooperation. However, for Pakistanis, Syria only became a relevant topic to discuss in light of what happened to Sridevi. While Pakistanis as a nation continue to squabble over politics and debate over who should lead a certain political party, whenever the topic switches to Sridevi’s death, their conscience would show up asking, “but what about Syria?”

Pakistanis and Pak Media are too much sad for #Sridevi
So far 400+ civilians (150+ of them are kids) are being murdered in #Syria #Ghouta . It is just bcz blood of Muslims is so cheap in all over the world :(
#sridevideath #SyriaIsBleeding pic.twitter.com/OL1R1Ms9Sl

To which the response is, “what about Syria?” The conflict in Syria is deplorable, and has been ongoing for a long time now. Talking about it is important, but it should not only become a topic of conversation when an issue you feel is less relevant is brought up. Simply asking “what about Syria” is not enough, especially when you do not go ahead and actually talk about Syria itself.

The conflict in Syria has been going on for almost seven years, with no end seemingly in sight. The attacks in Eastern Ghouta began a while before Sridevi’s death, and the media, especially international media, has been highlighting and covering the attacks.

To what capacity our media has discussed Sridevi, and whether that coverage was justified, is a separate debate. But why is it that only when confronted with one seemingly unimportant issue is when we begin to remember Syria? Where has our conscience been when people were dying over the years? When the Islamic State (IS) was using innocent civilians as human shields?

Sridevi passed away. Internet is flooded with condolences. 600+ people were killed in Syria. Say what again? Yep. This is the world we live in.

The responsibility of the media is to provide coverage to both and all events that are taking place. However, anyone who has ever had contact with the media knows that when an issue is picked up, the traffic it generates dictates how much it is talked about. After all, little Zainab was not the first child to be raped in Pakistan. She was not even the first child to be raped and dumped in the garbage in that area. Yet, #JusticeforZainab triggered a movement, and demonstrated the power of the media to mobilise.

Similarly, the platform of Express Tribune Blogs published a blog on Syria, highlighting the atrocities that had just begun, over a week before Sridevi died. Clearly, Syria and its problems have existed long before Sridevi died, and the media has covered it to varying degrees. But ultimately, how much the media covers an issue depends on the audience and its interest in those issues. This includes Pakistanis, who begin to care more about the Palestinians when someone like Paul Walker dies, and respond to this by clicking and commenting on articles regarding a celebrity’s death, which leads to generating more traffic and more interest in that story, ironically.

Why do we remember sufferings of Muslims in Syria, Burma and Palestine only when Paul Walker or Sridevi die?

The Pakistan Super League (PSL) commenced around the same time as Sridevi’s death. Since this is a cricket-loving nation, PSL is a big deal in this country. But obviously, even in this case, people started popping out of corners screaming about the atrocities in Syria and the media’s lack of coverage. However, you cannot, in good conscience, sit at home rooting for your favourite team, while complaining about people not talking about Syria on Twitter.

Why is it that when the media was reporting on the Eastern Ghouta attacks when they began almost a month ago, no one in Pakistan  seemed to really care? There was no hue and cry, or call for a protest for Syria and their children. Did Syria only matter to Pakistanis when they saw the media highlighting an actress’ death or covering an international cricket league?

Syria is bleeding and the world is sleeping…

Sorry Syria we Pakistanis are busy in PSL our media,news channels,and politicians are busy in political wars…#sorrySyria#PrayForSyria

Can we raise the voice for Syria too? just like we did for Zainab or let me know if you guys are busy in PSL?

This is not an isolated incident. Year after year we see Pakistanis ignoring international crimes and human rights abuses; after all, we have enough of that going on in our own country. But as soon as someone expresses solidarity with Paris after an attack, our instinct is to question why there is no solidarity for the Palestinians. Though we will ignore the plight of the Palestinians ourselves, as soon as people start condemning the Paris attack, people will immediately remember the atrocities faced by the Palestinians. We ignore the Rohingyas, but the next time an issue is being discussed in the media, the Rohingya crisis will yet again be brought up as an afterthought, where we question, “but what about the Rohingyas?”

In Palestine and Burma,
Daily Muslims are murdered.
No one say anything.

But a blast in france.
Lost the mind pic.twitter.com/kOmt8R5uK4

All of this leads to an important question: Can two issues not be discussed simultaneously? Do we only have the capacity to stop others from discussing Sridevi and PSL, while doing nothing actively to promote a conversation on Syria?

There is a growing number of ridiculous posts on social media comparing mass shootings in America to Syrian children being killed. How is this even a comparison? Have we as a nation stooped so low that now we compare the deaths of children in any capacity? Do we not have it in us to feel sympathy for children in non-Muslim countries?

All the new developments and escalations in the war have been reported, to the extent of oversharing pictures of injured children and civilians. But the media is a medium that responds very acutely to demand and supply, and the fact of the matter remains that there was demand for Sridevi that did not exist for Syria. What does this say about us? That is up to us to reflect upon.

Thanks to Sridevi our people came to know that 400 poor souls died in Syria.

It all boils down to this: Please do not simply blame the media for your own ignorance. Every event is being covered, but what is highlighted ultimately depends upon you, the audience. If Sridevi or PSL get more coverage than Syria, you can change that by simply choosing to focus more on the Syrian crisis. But if your actions are restricted to clicking on articles about Sridevi or PSL and commenting, “but people are dying in Syria”, then it is time to take a step back, look at yourself and question, is it really Syria you care about?

We apologise Pakistan, but it is not the media, it is you!