The road not taken: Going to Cambridge or getting married 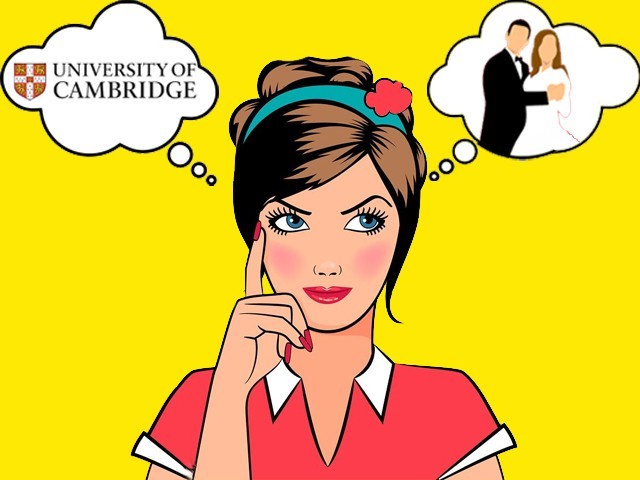 In Pakistan, and in my native language Urdu, woman translates into aurat, which comes from the Persian awrah, meaning “parts to be protected”. Literally, too, in my present Muslim, closed-knit, patriarchal society, women like me are guided — by their fathers, husbands, brothers, sons — to be protected from threats against their body and family honour.

While these men encourage “western” trends to an extent — like education at reputable schools, recreational sports, or even temporary employment — cultural traditions halt these prospects after marriage. You are born, our men tell us, to marry fast, and vouchsafe both yourselves and your future daughters under our protection.

Because culture is reinforced by practice, and because most girls in my family and neighbourhood were married off at 19 or 20, naturally I grew up understanding that my life would turn out to be largely the same.

And like most families around us, my family was also wary of sending their daughters abroad for higher studies. Local education until we reached marriageable age seemed sufficient. My sister and I were taught that there were enough boys in the house to look after the family distribution business; thus, for us, a long-term career wasn’t a priority. I would, instead, have to marry well, and learn how to manage my in-laws’ household.

My father, Baba, maintained from my birth that our culture was different from the ‘West’s’. He was adamant that we both expand our horizons and maintain our own set of traditional values. While our family travelled every summer to Europe or the UK, my parents were their own Pakistani selves there. At eight, I shuffled awkwardly behind Mama, who wore a traditional, full-length shalwar kameez, while Baba — his trousers religiously hitched above his ankles — stood in line to buy tickets at Disneyland Paris.

Baba never reacted to the half-naked foreigners around us. He took it as a means to educate his daughters.

I was fully clad under his protection, yet embarrassed. A part of me was enchanted by the liberation around me, by how the women we met — at sombre restaurants, glittering hotel receptions, crowded tours — could have the authority to choose what to wear, where to work, how to live, all by themselves. Baba didn’t notice when in our rented car trips around Germany and France, I’d roll my pants up into shorts and sit smugly on my seat. Or at least with his eyes in the rear-view mirror, he pretended not to.

You are born, our men tell us, to marry fast, and vouchsafe both yourselves and your future daughters under our protection. Baba’s ‘exposure’ showed me that there were opportunities for women in cultures different from ours. As we visited bookstores abroad, my mother, beautiful and passive, introduced me to Roald Dahl and Enid Blyton’s works; books she had revelled in herself throughout childhood. On car trips around the glittering lakes of Lugano and Lucerne, I read about Matilda’s victory over Ms Trunchbull, Sophie’s adventures with the BFG, Anne and George’s explorations of Kirrin Island in The Famous Five, and this new literary world seemed to unravel before me.

I was captivated and yet saddened by the realisation that unlike these characters, I wouldn’t ever get to have the same liberties as a Muslim, Pakistani girl. Still, to my eight-year-old self, societal boundaries seemed malleable and time-bound, and I continued my readings in the hope that when I grew up, I’d have equal opportunities to pursue my dreams as the boys my age would have too.

Funnily enough, my resolution didn’t waver with time, and three years ago, at 18, with my reasonable grades and no marriage proposals, I began to think of a career as a writer. On a high after finishing A Hundred Years of Solitude one night at 4 am, I decided what the hell — I wanted to write well, with expertise and precision. But first, I wanted to study great literary works in depth, maybe at a good university, maybe even abroad (Pakistani universities don’t offer a degree in English).

My mind began to spin wildly. Why not apply abroad to the best institute, maybe to Oxford or Cambridge? You won’t get in anyway, I told myself. But the vertigo continued. What was the harm in trying?

So a week later, when everyone was fast asleep, I switched my computer on, dimmed the study lights, and hastily applied to Cambridge. A month later, when I got the call that they’d like to interview me, my eyes nearly popped out. I asked Baba to take me to Cambridge for the interview. He downright refused, but he didn’t reprimand or punish me for secretly applying. Baba was relatively open-minded compared to the ‘system’. After seeing the tears in my eyes and my relentless persistence, he agreed — but with a condition: if I did get in, there was no guarantee that I’d actually go.

We trod the Cambridge grounds in the cold December wind amid rustling fallen leaves. There were six other girls for the interview — from Paris, Singapore, Brazil and the UK. We discussed The Weeknd’s latest music, and Netflix’s Stranger Things. I was excited, confident and thoroughly comfortable. The interviews, each 30 minutes long, turned into more of a literary chat. Two interviewers sat opposite me on mahogany chairs. We discussed my personal statement, analysed Mansfield and Keats and made jokes about how the lack of sunlight affected our literary mood. When I was free to go, I felt satiated. Content. I knew I’d tried.

Two months later, while browsing through my junk email, I opened one that confirmed my unconditional offer from Cambridge. I fell off my chair howling. I was ecstatic, dumbfounded, but at the same time there was a touch of melancholy: I remembered Baba’s condition.

I approached Baba, whose eyes glittered with pride at the sight of my admission letter, while his head shook into a firm, “no”.

I felt crushed, ashamed and angry. I’d hoped that maybe Baba would, by some miracle, relent. I’d come too far this time, for my writing career to remain intangible — a mere dream left unlived.

“Don’t you know it’s Cambridge?” I argued. “People don’t go for financial reasons, and you’re stopping me because of what the people in our community will think?”

“I supported you as much as I could, Mehreen, and I’ll continue to do so of course, but every culture has its conventions.”

With a glance at Mama who stood silently in the bedroom corner, never intervening, I wailed that he was enforcing obsolete, draconian values on his daughters, and burst into tears.

After numerous arguments, I discovered Baba was more stubborn than I’d expected him to be. At times, I felt desperate enough to imagine myself grabbing my passport and running away. I envisioned Baba’s voice breaking on the other end when I’d eventually call him from Cambridge. In my mind, he’d perhaps blame himself for exposing us to that “western” culture, and would finally give me his blessing (and the university’s tuition fees).

Yet I admit, I’m glad I didn’t run away. Cambridge or not, it wasn’t worth leaving my family. Baba tried to make amends with hugs and gifts, which I accepted. He was still my father after all.

Four months after I’d received the Cambridge offer, a “good” proposal came. His name was Ali. He was well-established, 26 (six years older than I was) and according to my family, a genuine guy. Knowing I wouldn’t go to Cambridge and still bitter with my family for their treatment of me, I hesitantly accepted. I wanted a new start, a different environment, some time to heal — even if it was under the “protection” of another man. Two years later, last August, Ali and I entered an arranged marriage.

Post-marriage, I learned to love and respect Ali for his easy-going nature and his unwavering care for me. He was open-minded, more so than Baba and was comfortable with me having a writing career, even if I were to attend fiction writing workshops both locally and abroad. Inevitably, we discussed the Cambridge topic, and I confided how big of a blow that was to my career.

“Why so?” he replied, his gentle brown eyes unfazed and soothing. “You want to be a writer, and you can be. Cambridge isn’t the end game.”

“But… but the networking…” I spluttered. “The contacts! The teaching! How could I be a writer without all that?”

Ali insisted that I was making it about Cambridge, not about my writing, which is what really mattered. As he spoke, I tried to listen. Virginia Woolf didn’t go to Cambridge. Shakespeare wasn’t well educated either. Maybe I would have to work harder than other people, put in more years, enrol in a local university… but that didn’t mean I couldn’t be a writer.

With time, I learned to empathise with my family and their decision, accepting that Baba was only a product of his environment. Both he and Mama were firm in their orthodox beliefs. Keeping their girls home was a plea to help safeguard their own culture in an alien world.

Yet I can feel hot winds of change around me. Pakistani society is learning and developing from the globalised importance of education and independence. With events like Malala’s Educate Girls campaigns and #TimesUp, the current generations — including myself and Ali — yearn to give space and independence to each other and teach our offspring the same.

But of course, Cambridge is an opportunity lost that I still regret. Sometimes when I’m staring at the computer blankly during writing sessions, I long for the warmth of ancient fireplaces, the rusty smells of centuries-old libraries, the meandering and brilliant discussions with tutors, communal meals with my peers.

Then I look at pictures of Ali and me, hand in hand at our wedding, while Baba stands with an unabashed smile in the background. I tell myself that Cambridge was my road not taken, and life deals you cards that you to learn to manage instead of getting depressed over. In my case, my gender and cultural values obstructed me from having the same opportunities as boys my age did. I can either hate it and run from it or confront it and hope for change.

Still, I realise that in this time and society, I need the blessings of men around me in order to establish myself. These men might be supportive and kind-hearted like Baba and Ali but I yearn for the freedom, the authority and independence that women like Jane Eyre, Jo March and Hester Prynne craved, albeit in different shades and tones than my own longings. Every time I pick up my pen, I take on these societal structures that can only be altered by awareness and exposure which in turn come from lots and lots of reading, and writing.

For now, as students my age savour their goodbye hugs and farewell parties before leaving for universities abroad, I glance at a crisp, white letter on my right — my Cambridge acceptance — then at the wedding ring on my left hand.

And I know I won’t be among them.

This blog originally appeared on The Establishment.

The author’s work has appeared in Dawn and The Establishment, and she is currently working on various short stories set in Pakistan.