I am a Muslim, but I fake fasting in Ramazan 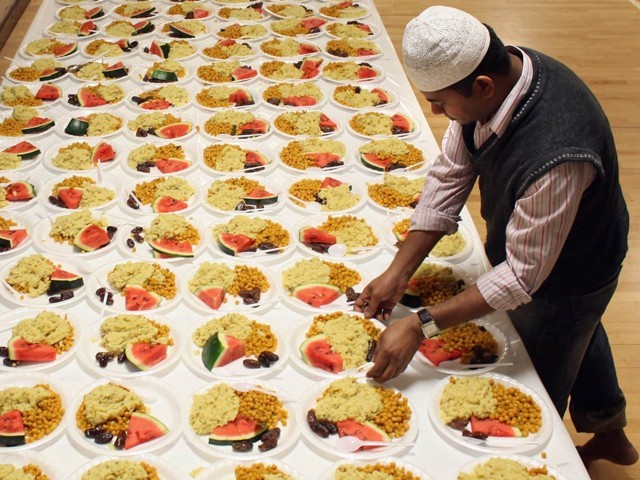 I and many others like me dread Ramazan because it means another month of being dishonest to our Muslim families and friends. PHOTO: GETTY

It’s Ramazan and my mother is in the kitchen, slaving over a hot stove preparing a big feast. She’s fasting, even though she is a 64-year-old diabetic. As for myself? Earlier in the day, I had a huge fish and chips platter for lunch, but my Muslim family believes I’m fasting with them.

This has gone on for years.

During the month of Ramazan, most of the world’s 1.8 billion Muslims will observe by basically not partaking in any vice for 30 days. From sunrise to sunset, all able-bodied Muslims are required to “fast”; prohibited from eating, drinking (yes, even water), smoking, cursing, bad-mouthing, and any sexual behaviour.

Fasting during this month is one of the five pillars of Islam, and not doing so can not only invite social ridicule within the Muslim community, but in certain Muslim countries can also lead to a fine or even being jailed. Most Muslims look forward to Ramazan every year, because they see it as a religious cleanse that leaves them more pure and sets a tone for the rest of the year.

That’s if you actually believe in the faith and practice it, which I don’t. But the Muslims around me don’t know that.

Unfortunately, I and many others like me dread Ramazan because it means another month of being dishonest to our Muslim families and friends. See, there are many reasons why someone who comes from a Muslim background doesn’t fast during Ramazan. They may still have faith in the religion, but don’t take it as seriously as they should. They might think fasting is more for traditional Muslims, and they consider themselves more of a casual Muslim.

Another reason is they may have completely left the religion, but haven’t “come out” to their Muslim community – something many young people from these backgrounds struggle with, and this is exactly where I fall. Like many other millennials, we just aren’t religious, but we just so happen to come from a religion that is customarily harsher with the idea of apostasy compared to other religions in the West.

This results in an ideological struggle between older and younger generations of Muslims that has even been depicted in recent pop culture, from the bacon eating scene in Aziz Ansari’s Master of None to Kumail Nanjiani’s The Big Sick, where his parents disown him because he wants to marry an American white woman. This is happening in many Muslim homes, where first-generation millennials have views on religion that go against the very strict nature Islam can have. We might view ourselves as Muslim by identity, and even speak out against Muslim discrimination, but are far from practicing.

Ramazan for us can be extremely complicated to navigate since it’s so important in Islam. Rather than “coming out” to our family and even friends, we know if we can just get through the month, we’re pretty much good for the rest of the year. Some might fast just for the sake of it with no real spiritual intention; just for show. Others might try their best to avoid their Muslim associates and families altogether.

But probably the most insincere practice is what I call “fake fasting” – acting like you’ve been fasting all day and “breaking your fast” at night, as if you weren’t eating double cheeseburgers and chugging Diet Cokes all day. Many do this in order to keep the façade going; that they are still a practicing Muslim. This is done only to avoid cruel judgment from other Muslims and is totally not the point of fasting during Ramazan, which is actually supposed to be a spiritual journey of struggle in order to come closer to God.

Hiding the fact I’m not fasting from the Muslims around me was difficult at first, but it’s a skill I’ve now fine-tuned. It all really depends on the size of the town you live in and how many Muslims are in it – the smaller the town, the more challenging. If you’re bound to run into a Muslim you know, you certainly don’t want to be caught holding a Starbucks caramel latte during the day. They’ll give you a piercing look of judgment, followed by disappointment.

I’ve had times where I literally looked left and right before drinking water while driving around my mid-size suburban hometown during the day. When I go out for lunch, I always make sure to eat at restaurants Muslims wouldn’t be anywhere near – bars and Hooters are always a safe bet. Obviously avoid the halal markets and the falafel joints.

Let’s say you get through the day without anyone knowing you’ve been eating or drinking. Now the ultimate challenge: you have to act like you’re just as hungry as your fellow Muslims at sunset. This is where guilt can really set in. You sit down for dinner where everyone has legitimately been starving all day, meanwhile you ate a big bowl of chilli just a couple of hours prior. Sometimes, certain people can tell just by looking at you that you haven’t been fasting; it’s like a weird sixth sense they have, and you just have to hope they don’t call you out.

This puts myself and others like me in a weird predicament. Either we just come out and admit we don’t fast and face whatever backlash, or we continue to live a lie for one month every year. But until I do end up making a decision, I’m going to enjoy this chicken kebab over rice.

The author is a contributor for Vice.