From Delhi, with regret: How a postcard from India revived painful, unhealed memories of the Partition 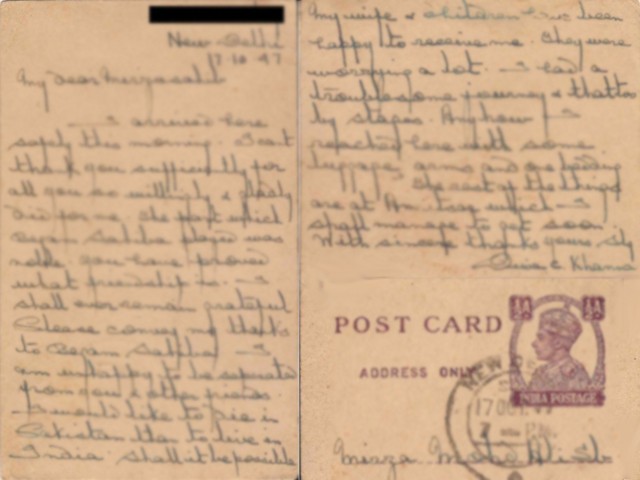 The letter is an expression of the regret and grief that many felt at having to leave their homelands unwillingly. PHOTO: HAMZA SHAD

From history textbooks and family accounts, we often hear about the intense emotions and trauma felt by those who were forced to leave their homes behind for a new country during the Partition of British India in 1947.

These days, it is hard to truly understand those feelings when we are so far removed from the experience itself. But tangible, everyday artefacts from that era – like a simple letter exchanged between separated friends – can suddenly resurrect those devastating and unhealed memories.

That’s precisely what happened when my mother was recently looking through old papers in my grandparents’ home in Lahore and rediscovered a letter addressed to my great-grandfather Mohammad Ali Mirza. It was from his friend Diwan C Khanna, who had to leave Lahore with his family due to the uncertainty, fear and violence at the time of Partition. His short letter to my great-grandfather expresses gratitude for the latter’s help in arranging for his safe travel to Delhi and deep anguish for having to leave his motherland.

The entire text of the brief document, dated October 17, 1947, is as follows:

I arrived here safely this morning. I can’t thank you sufficiently for all you so willingly and gladly did for me. The part which Begum Sahiba played was noble. You have proved what friendship is. I shall ever remain grateful. Please convey my thanks to Begum Sahiba. I am unhappy to be separated from you and other friends. I would like to die in Pakistan than to live in India shall it be possible. My wife and children have been happy to receive me. They were worrying a lot. I had a troublesome journey and that too by stages. Anyhow I reached here with some luggage, arms and one bedding. The rest of the things are at Amritsar which I shall manage to get soon.

With sincere thanks yours sly (sincerely) 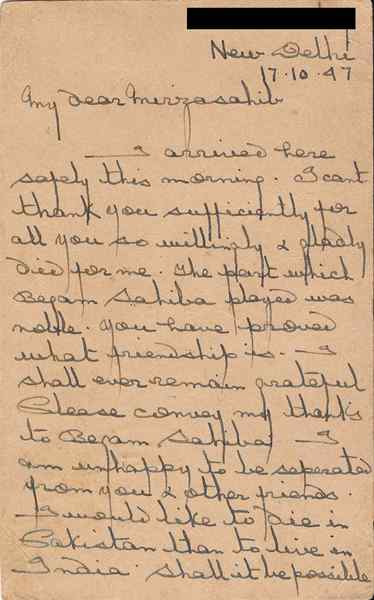 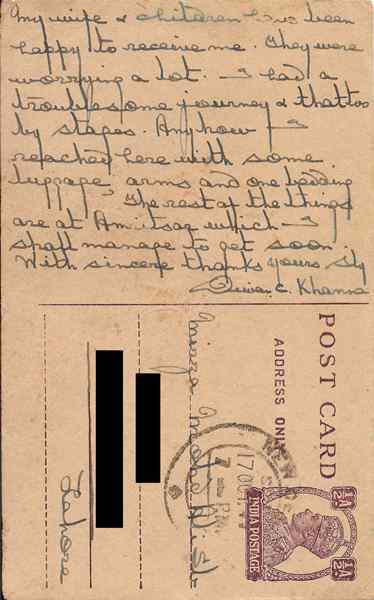 The part of the letter that struck me most was:

“I am unhappy to be separated from you and other friends. I would like to die in Pakistan than to live in India shall it be possible.”

The love this man had for his homeland – despite the political circumstances that made him abandon it – was so great that he would have preferred to die there than to continue living in what was a foreign land to him, Delhi.

Concrete primary evidence, like this letter, shows the strong ties of friendship that existed between different religious communities in pre-independence South Asia. Cities like Lahore and Delhi were very communally diverse in the early 20th century, but were unfortunately homogenised during Partition due to widespread anti-minority violence in both Pakistan and India as the British left.

Khanna’s letter to my great-grandfather is an expression of the regret and grief that many felt at having to leave their homelands unwillingly. Many were comfortable where they were – even if the structure of the governing polity was changing – but were coerced into fleeing due to violence or the threat of it.

Because of the massive migration that took place between India and Pakistan, there are millions of people in each country descended from those who experienced the trauma of Partition. For the vast majority, their loyalties now lie with the state they inhabit, and they no longer feel the passionate love for their ancestors’ homeland as Khanna did. But they are still aware of their origins. Therefore, they often have a special interest in the other country and pay more attention to India-Pakistan relations as compared to bilateral relations with any other country. Indeed, because of their entwined pasts and exchanged populations, Pakistan and India have and will continue to have a unique bond with each other.

These special circumstances make it much more difficult to ‘de-hyphenate’ India and Pakistan from each other, as some political analysts would like to do now. There is a clear historical reality behind the close association of the two countries, so one of the two cannot disregard the other as easily as they could a more distant country.

Looking ahead, Pakistanis of Indian descent and Indians of Pakistani descent can play a large role in improving bilateral ties. If they organise politically within their respective countries, they can become powerful lobbies for positive change given their sheer numbers and influence. Pakistani-Indians and Indian-Pakistanis, perhaps as we should call them, could proceed to pressure their own governments to open up freedom of travel and trade so that they may visit and engage with their ancestral homelands more easily.

There is great untapped potential for these two communities to not ‘de-hyphenate’ India and Pakistan, but to normalise their relationship, celebrate their joint heritage, and alleviate the pain from 1947 that has only continued to build up. Then, perhaps, the descendants of Mr Khanna living in India today may be able to set their eyes and feet upon the land that he loved so dearly.

The author is a graduate of the University of Chicago, where he studied economics and political science. He has written for The Diplomat, The National Interest, and The Express Tribune, among other publications.