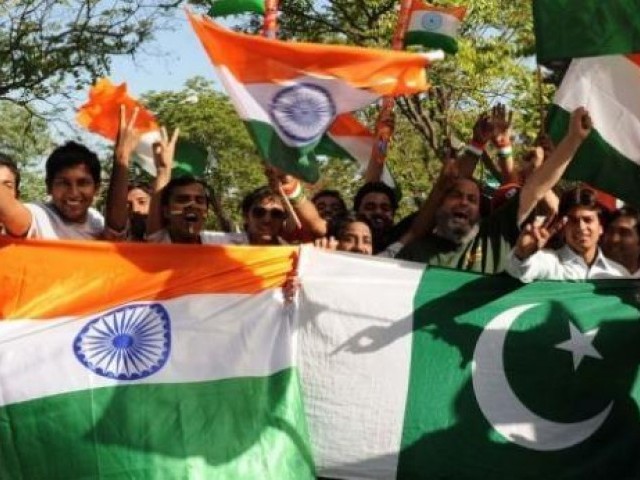 All dreams can be turned into realities, all we need to do is to first break the barriers within, and take the first step forward. PHOTO: AFP

Many stories in our lives, no matter how insignificant, leave us changed. I narrate my personal life experience, as a young child, which subconsciously broke my psychological barriers between India and Pakistan. This was long before I even decided to marry a Pakistani, and cross over to the other side.

Living in a rented house in New Delhi, India, we were faced with a senior Hindu couple as our landlords, who were old workers of a radical Hindu extremist organisation. Being a very strict vegetarian couple, even the normal Hindu families wouldn’t feel comfortable renting their upper floor.

My parents, being moderate Muslims, were respectful of their religious sentiments, and in dire need of a short term rental place. They thought they would be able to spend next six months as tenants there, without any problem. The owners had put restrictions on us for certain non-vegetarian food items which we were not allowed to cook in the kitchen. It did make us a little uncomfortable but out of respect and religious sentiments, we would strictly abide by their rules.

Auntie, as my parents called her, would come and check the kitchen often. But since my parents were complying to their demands and respecting their sentiments, they did not object. In fact, they let her reassure herself.

Once my father’s aunt in Lahore fell sick, and he wanted to see her before she passed away. Luckily the whole family got the visa too. My parents informed uncle and auntie that they were going for a visit to Pakistan. To be honest, we expected a negative reaction from them for their tenants were to leave on such short notice.

Surprisingly, a day later, the senior couple came upstairs to us and made an appeal. They said they lived in a house in Lahore before they migrated to India in 1947, as newlyweds, and if we could bring back a picture of that house to them, it would mean a great deal. They had the house address memorised by heart, even after almost 29 years of living away from it. They had a strong bond with Lahore and were holding on to memories of their youth spent there.

The address was (some number), Ram Gali, Lahore.

We went to visit their house and took photographs of it. The current residents were very hospitable and showed us all the different and curious things about the house they had left exactly as they were.

One such thing was the “Om” emblem installed at the head of the entrance of the house. We were surprised and found it immensely kind of the new residents to have left it there as the Sanskrit word ‘Om’ is of sacred importance to Hindus.

When we returned, the first thing my father did was he developed the photos, and present it as an album to our former landlords.

Upon receiving the album, the old couple broke down. Tears and simultaneous smiles shone on their faces as they touched and saw the pictures. My parents gave them details of the house, verbatim from the current residents in Lahore. They were particularly moved by the symbol “Om” still being in place, and the name of the street still being Ram Gali. Maybe, sitting across the border, they had the idea that Pakistan is extremely anti-Hinduism and all their belongings would have been destroyed or reconstructed by now.

Around the same time, my nani (maternal grandmother) had passed away, and mother would feel depressed. Auntie would then console her by saying,

You are my daughter; as it is I have none.

She had two sons, and they, too, were living away at that time. Her motherly emotions were not stymied by differences of faith. She was beginning to realise that our prejudices based on religion were unimportant and meaningless.

Auntie never came up to check for non-veg being cooked in the kitchen again, as she had before. But she did visit to give us guavas from her tree in the backyard, or chameli  (jasmine) flowers from the garden, which my mother loved so much.

Our new house was under construction and uncle once offered,

Take me there, for I have experience in house building and can give you some suggestions.

After six months, we moved to our own house, but the relationship we had weaved out of love remained. It was no more a torn fabric of partition but a beautiful tapestry of friendship and love.

They did not visit much as they were very old, but whenever we visited their house, we received hugs with a warm reassurance,

“We are your nani (grandmother) and nana (grandfather),” they would say, helping us children cope with the absence of our own.

Now, I’m married to someone from across the border and I believe that my Indian nani and nana’s attitude played a major part in removing the demonised presumptions I had of people across the border. Perhaps this was what gave me the courage to even think that living with a man from Pakistan would not be such a bad idea after all.

Two decades on, witnessing the turbulent tides between India and Pakistan’s relations, and watching the feelings of misunderstanding existing between certain sections of people on both sides, I feel there is a dire need to break these psychological barriers. We may now be independent but we share with each other more than what a simple defined border can weaken. Our traditions, culture, attire, our liking of spicy food and chapattis and our love for our families are all mutual.

Thankfully, the distance-less, border-less social media is playing that role. It is bringing people across the border closer as friends. Even something as small as a Twitter trend about our friendship can make a difference in someone’s mindset and remove our biases.

This year, I’ve seen a group on Facebook, as the name implies, “Celebrate India, Pakistan Independence Days for Peace, August 14/15, 2012”.

Following a plea to “Pray for Peace between India and Pakistan” on December 18, 2011, initiated by a Toronto based Indian journalist, Swati Sharan, almost 200,000 people across the globe prayed for peace. Inspired from this success, the idea to form the above mentioned group and to celebrate independence days together for peace was conceived. Thus a Facebook event was created.

A number of peace groups  from different parts of India, Pakistan and even Canada joined in. (They are all listed on the event page).

Growing in just a few months, now all these groups are set to celebrate the two independence days on ground as ‘peace days’, in their own unique ways. They all look forward to take it further each year, hoping that more groups will soon join in.

But we need to see more of this sentiment beyond the virtual world and into the real one.

Learning from these example, I again feel reassured that after all dreams can be turned into realities. All we need to do is to first break the barriers within, and take the first step forward. After all, we cannot deny the fact that we were once one. We stood united and even fought against the British together, hand in hand. And today on India’s Independence Day, despite the political and legal barricades, we have to learn to love each other. We already do so naturally; maybe we aren’t expressive enough or have yet to unlearn our biases and accept each other as brothers that we are, but it is undeniable that love does exist.

I pray for Pakistan and India to thrive far more than they already have. Where Pakistan will always be in my prayers, India will too. I wish for lasting peace to prevail between the two nations, the two neighbours, the two brothers.