We all know what divides India and Pakistan, but do you know what unites them? 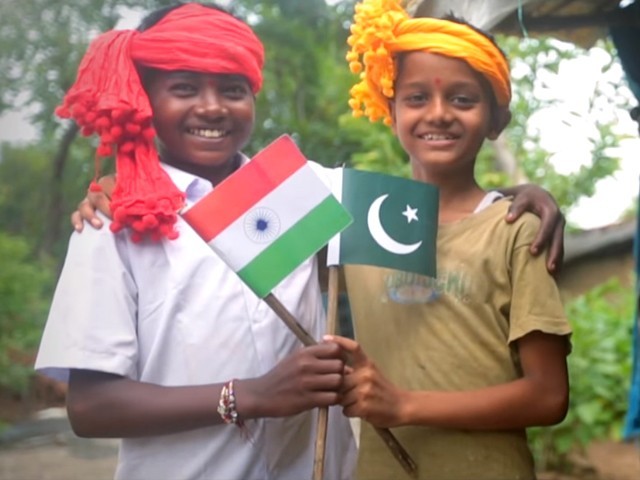 A Rajasthani inside me could easily strike a chord of comfort and friendship with gregarious and gourmand hearts of Lahore, Karachi, and Multan. PHOTO: SCREENSHOT

India and Pakistan are inheritors of a common civilisation and hence we have an ocean of shared heritage in literature, philosophy, music, food, and mysticism.

These days, it seems we have completely forgotten the days when we regaled ourselves over the melodies of Noor Jehan, Mehdi Hasan, Ghulam Ali and Ataullah Khan Esakhelvi. Even the days of yore when Ali was bitterly opposed by Shiv Sena were not this disturbing because Balasaheb Thackeray never shied away from confessing his secret admiration of Ghazal maestros like Ali.

Then the times came when the shared social and cultural traditions of music, food, costumes, festivals and mysticism got uprooted from the popular discourse and found a safe refuge in initiatives like “Aman ki Asha” (hope for peace). However, in the course of time, even such safe houses met an untimely death and with a heavy heart gave way to the discourse dominated by surgical strikes, Hafiz Saeed, Maulana Masood Azhar and tactical nukes. The only respite left is cricket and the tales of Imran Khan’s wives. Even that seems to be waning fast.

As an Indian born and brought up in a state bordering Pakistan, and overfed in Delhi with both the punctured intellectualism, and the chicken karhai of Kareem’s, I can lay a decent claim to at least have a feeling of Pakistan’s cultural, social and religious heritage. At Cornell University, I experienced this feeling first hand. In the early days of homesickness and during the arduous process of cultural adaptation, it wasn’t a group of Indian engineers from Southern India who came close to me. The Rajasthani inside me could easily strike a chord of comfort and friendship with gregarious and gourmand hearts of Lahore, Karachi and Multan.

I must say there is a range of peculiarities that unite us and some of them can be quite embarrassingly hilarious. One can begin with doodh patti (type of tea), almost a daily ritual for us in the morning and evening. No amount of Darjeeling tea, black coffee and green tea can fix a South Asian head in the evening, after a rigorous day of statistics classes which had already robbed him of his afternoon siesta. Only my Pakistani friends would understand my existential crises when I was looking for some doodh patti and was served champagne instead, at the morning and evening seminars. But for such occasions, we sneaked out to get some strong chai. The “goras” (white people) found the reason for our collective disappearances much later, after a thorough investigation.

It was us Indians and Pakistanis who had taken a vow to arrive late, slog just a day before the exam, and as a last resort, make sufficient preparations to cooperate with each other like all good and pious human beings, in the exam. It was the most terrific Indo-Pak alliance and all the western surveillance equipment could never bust it. And, of course, we hated toilet paper and helped each other out by secretly arranging a mug in the toilets.

Raza sahab, a diehard Lahori, my friend, philosopher and guide, threw amazing parties. The idiosyncratic philosopher inside him would first take a long walk and then devote long evenings to cooking bhindi gosht, chicken karhai and chicken kali mirchi. Everything was cooked in pure desi ghee, something which is equally dear to both Indians and Pakistanis. His tales of food, fashion and literary evenings of Lahore always reminded me of Ghalib’s Delhi. I felt that both the cities have similar vibes of love, sensuality, ideology and politics. And then, I met Sophia and I felt she is another cosmopolitan girl from Mumbai, but she turned out to be from Karachi. In her Memon-styled cooking, I got the flavour of dal sweetened with jaggery, a famous Gujarati dish that we, hot chillis-addicted Rajasthanis, have always feared.

The flavour of caste from Pakistan can also be very exciting for an Indian. My friends Raza and Wasiq proudly claimed their Rajput ancestry with their fondness of shikaar (hunting) and guns; it felt as if they hailed from a typical Rajput feudal household of Rajasthan. When my friends Hajra, Hira, Wasiq and Raza celebrated Holi and Diwali with us, it seemed as if they knew it right from the dawn of the civilisation in the subcontinent.

I was absolutely thrilled to find in my friend Wasiq a huge fan of Bollywood. He could narrate dialogues of Amitabh Bachchan and Amrish Puri with a feeling that made me realise that we have the same DNA after all. Raza had a penchant for Kishore Kumar and Rajesh Khanna, whom he lovingly addressed as “Kaka Khanna” all the time.

My stories of Pakistan will be incomplete without the mention of Dr Fatima. The cigarettes, poetry and tea we shared over heated discussions on India-Pakistan melted into a sublime love when I sat for meditation and she said her last namaz (prayer) of the day, and I guess a mere mention of this is enough to silence those who use religion to fight.

From this side of the border, I would like to mention that each and every Indian who has crossed the border either for marriage, cultural events or cricket tournaments, tirelessly tell about Pakistani hospitality and the delicacies of Lakshmi Chowk in Lahore. I am even told that many shopkeepers do not even charge money from Indians.

Even in these days, when India is supposedly believed to have taken a sharp right turn, our private evenings are not without the melodies of Mehdi Hasan and Malkha Pukhraj. My friend, Mr Bhargava, a staunch Narendra Modi follower, speaks fluent Urdu with a feeling of near reverence and loves his whisky if it drains with the mesmerising Hasan. Until recently, Pakistani serials such as Zindagi Gulzar Hai and Humsafar were driving Indians crazy.

As someone born and brought up in an Indian middle class family, I have grown up with the stories and individuals who blamed Pakistan’s intelligence for everything unexplainable or uneasy in India. It could be anything from the monkey man of Delhi or diarrhea of celebrity politician, to overflowing sewerage lines or a train accident due to poor maintenance. My perception of Pakistan was completely shattered when I had a chance to interact with my colleagues from Pakistan at Cornell University. Through this story, my idea is to bring forth the importance of our shared cultural and social traditions. Such a dive into the shared traditions may not solve our long-standing political problems, but it can circulate a fresh breeze of love, giving us an occasion to smile at each other and feel happy about what unites us rather than slit each other’s throats over what divides us.

Unfortunately, resolving political disputes appears highly unlikely in the near and distant future. Both the countries seem to be approaching a near dead end-like situation on the geo-political front. Given this situation, the only hope left for normalising the situation between the two South Asian arch rivals lies in exploring the shared cultural, social and religious traditions.