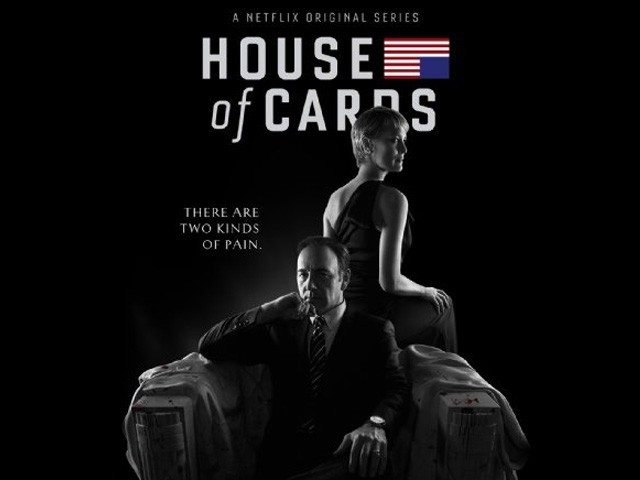 House of Cards has won three Emmy awards, a Golden Globe and Writer’s Guild of America award, with Obama being a huge fan. PHOTO: IMDb

House of Cards is an American political thriller drama series produced by Netflix, originally based upon a BBC series of the same name. The main premise of the show is set in present day Washington DC. It chronicles the political life and upheavals in corridors of power of the main protagonist of the series, Frank Underwood (Kevin Spacey).

Frank Underwood, the main character, is without a shadow of doubt the life and force behind the show. He is equipped with a typical southern accent, sensibilities and mannerisms, cowboy-ish charm and a shrewd, cunning demeanour in his arsenal as he begins his journey in season one as an experienced democrat and House Majority Whip in Congress.

He vows to take vengeance, after being passed over for the office of the secretary of state, on all of those who undermined him and thus his diabolical conquest begins. It is quite addictive and mesmerising, for the lack of a better word, to see Frank politicking and manoeuvring his way in the highest of echelons of power with such seamless ease and Machiavellian cunningness.

One can’t help but to draw an outright parallel between his political strategies and the Machiavellian doctrine, as he is callously ruthless in his endeavours to satiate his thirst for more power in the most powerful city in the world, Washington. While keeping all the potential spoilers at bay, suffice it to say, he succeeds to a great degree in his cause.

One of the trademarks of the show is when Frank, in between an on-going discussion or in a heated argument with another character in an episode, breaks ‘his character’ and addresses the audience of the show directly. Some of the greatest ‘one liners’ and dialogues are unarguably from these instances.

This might hold ground in this case as it gives us a brief insight and a peek inside in what goes on behind closed doors of a fictional made up congress of the US and its different political institutions. While this show is a work of fiction, some story arches are loosely based on real life events in US history.

Kevin Spacey in his role in playing Frank Underwood is par excellence. He has received widespread critical acclaim for the portrayal of this conniving man who will stop at nothing to get what he wants and has his eyes firmly set towards the oval office, the highest accomplishment he could achieve if he’s successful in his ambitions.

My favourite season has to be the second one. For starters, the first episode sets the stage perfectly for the rest of the episodes to come and there’s a big ‘what just happened’ moment at the end of the episode. Other than that, as a whole, the second season carries some interesting themes and food for thought to ponder over such as journalistic integrity and adventurism, and the role of the big brother – the security apparatus and agencies of US. But again, the highlight of it all is seeing Frank starting off as the second most powerful man in the world (spoiler), as the newly elected vice president.

I love his quirky remark, when he’s about take oath for the office and he breaks character again and says

“One heartbeat away from the presidency and not a single vote cast in my name. Democracy is so overrated…”

It kind of puts his whole character in perspective as to how manipulating and conniving he can be.

The series has received numerous awards, including three Emmy awards, a Golden Globe and Writer’s Guild of America award to name a few. Amongst the millions of fans of this series, one of them also happens to be, coincidentally, the most powerful man in the world. That’s right, the President of United States, Barack Obama, is also an avid viewer and fan of this show, so much so that recently when season two was about to be aired, he tweeted requesting the fans of the show not to post any spoilers for him.

If anyone is looking for quality entertainment, House of Cards comes highly recommended. It has just finished two seasons while season three has been green lit by Netflix, which will air in 2015.