Why in the world is Donald Trump undoing decades of US policy on Jerusalem? 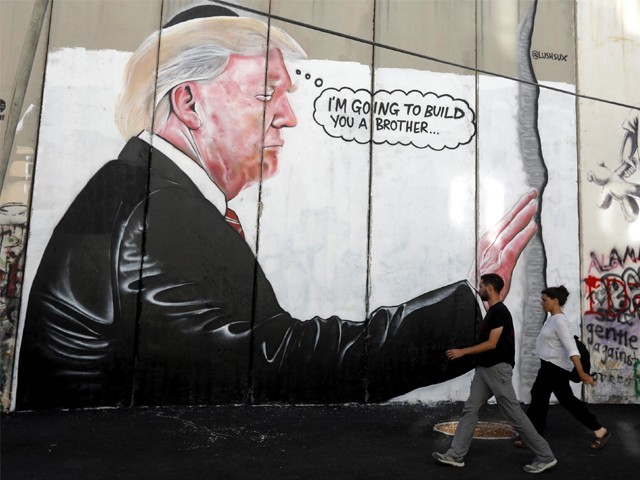 It is almost impossible to see the logic behind Donald Trump’s recognition of Jerusalem as Israel’s capital, and possibly moving the US embassy to Israel there – before it even unveils what’s certain to be a controversial plan for Middle East peace, which will be tough enough to sell.

The White House is probably betting that, despite the noises in the Arab world against such a move, their key allies in Saudi Arabia and Egypt will limit their opposition – already publicly voiced – to lip service, as they are all interested in protecting relations with Trump over more urgent issues, such as fighting militancy and confronting Iran. It’s also betting that the Arab and Muslim public outcry will be limited, both because of efforts by their governments to contain dissent, and because administration officials may have swallowed the arguments that Arabs no longer care about Palestine, or even Jerusalem.

All of this is doubtful, but let’s consider for a moment the possibility that the administration’s assessment that costs will be limited is accurate. No one, not even President Trump, is arguing that such a move would be helpful to US-Middle East policy. This begs the question: Why is Trump doing this?

Trump certainly doesn’t need to solidify his pro-Israel credentials; three of his key Middle East advisers are known to be sympathetic with the Israeli right. More importantly, the American public, including his Republican core, already thinks his policy is pro-Israel. A University of Maryland Critical Issues Poll (among a national sample of 2,000 American adults, fielded by Nielsen Scarborough November 1st to 6th and released at the Brookings Institution last Friday) found that 59% of Americans said they preferred that Trump lean toward neither side of the Israeli-Palestinian conflict. In contrast, 57% of Americans, including most Republicans, said he is in fact leaning toward Israel. Our poll also shows that 63% of all Americans oppose moving the US embassy in Israel to Jerusalem, including 44% of Republicans.

How about the Evangelical Christians whose support has been critical for Trump and who are known to support declaring Jerusalem as Israel’s capital and moving the US embassy there? Two-thirds of Evangelicals say Trump’s policy is already leaning toward Israel – a proportion that’s even higher than that of the rest of the population. Even on moving the US embassy to Jerusalem, the support is hardly overwhelming – while 53% of Evangelicals support the move, 40% oppose it.

Evangelical leaders undoubtedly bring this issue up with the president, but none will abandon him for not making the declaration. Trump has been the president who has arguably given the Evangelical right more than any other president in history has – from favourable key appointments such as Supreme Court Justice Neil Gorsuch and Secretary of Education Betsy DeVos, to highly favourable policies toward religious schools.

In the meantime, the administration’s assumptions about the limited costs of the move are based on little more than a leap of faith. In fact, the move would go against the very priorities that the administration has set for itself in the Middle East – fighting Islamist militancy and confronting Iranian influence. Jerusalem is the perfect issue for Iran and Islamist militants to use to mobilise support against the United States and those who endorse its policies.

Publicity over likely limited Arab voices, such as the Twitter hashtag, #RiyadhIsMoreImportantThanAlQuds, may have played a role in the assessment – in addition to re-enforcing Israeli government statements. But this is not new. In the lead-up to the Camp David negotiations that President Bill Clinton mediated in 2000, it was not hard to see that the White House underestimated the centrality of Jerusalem to the Palestinians and Arabs broadly and that this issue could bring the negotiations down. It did.

Sure, the Middle East is more divided today than it was then. Many Arabs are focused on their immediate tragedies; others may have a diminished connection to Palestine, or even to Jerusalem. But as the region has grown deeply divided, Jerusalem has remained a central symbol that transcends the divide. It remains a mobilising issue even in a polarised environment – even if Arabs don’t go out into the streets in consequential numbers, a declaration will play into the hands of those plotting in the basement.

It’s also good to recall what happened just a few months ago, as the same assumptions about the irrelevance of Palestine and Jerusalem prevailed. Following the killings of Israeli policemen, an Israeli government attempt to install security machines to search Palestinian worshippers at al-Aqsa Mosque generated Palestinian demonstrations that quickly mobilised Arab and Muslim public opinion, and led to intervention by governments – ultimately forcing a reversal of the measures.

There is of course a direct impact on Jordan, whose stability is essential; King Abdullah, an American ally, has been among the first to make clear in his warnings about the impact of the move on his society. Since then, many have added their warnings including Turkish and French leaders, among others. Then, there is the direct impact on the Palestinians. The move could force Palestinian President Mahmoud Abbas to walk away, at least initially, from talks. But even if Trump could get Abbas to swallow the move, the leverage Abbas would expend to keep any degree of legitimacy among Palestinians will inevitably come at the expense of his ability to convince the Palestinians to swallow any deal Trump will offer – a nearly impossible task in the first place.

So, again, why in the world is Trump doing this?

From the outset, most experts understood that the “deal of the century” was most likely beyond reach and that its collapse may lead to President Trump lashing out with such moves as moving the US embassy to Jerusalem and giving the green light to expand Israeli settlement in the West Bank. The fact that the White House may take a controversial step on Jerusalem now, before Trump even has a chance to unveil his plan, means one of two things.

The first is that his advisers live in their own bubble, reinforced by unprecedented inexperience. In fact, this is already a public fear. Despite deep partisanship on almost every issue, Americans come together on this issue – 81% of all Americans, including 71% of Republicans, prefer Trump relying on experts in his Middle East diplomacy, not on inexperienced family members and personal lawyers.

But there is a second possibility, that the Trump administration has already given up on its “deal of the century” and is looking for ways to pin the blame on someone else.

The author is a non-resident senior fellow in the Project on U.S. Relations with the Islamic World, as well as the Center for Middle East Policy, and the Foreign Policy program at Brookings. He tweets @ShibleyTelhami (twitter.com/ShibleyTelhami)