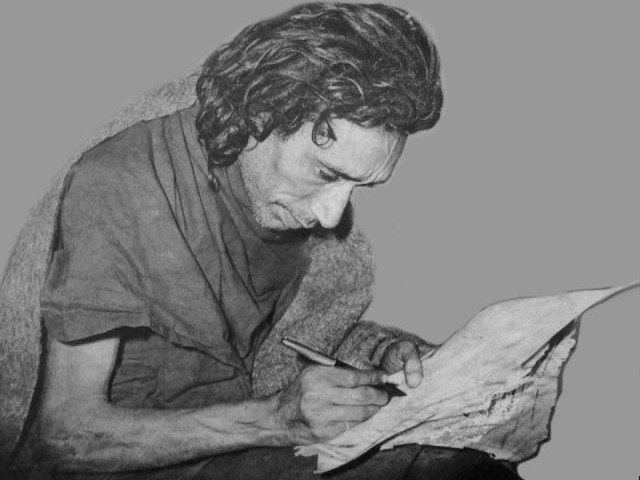 Had Saghar lived longer, I have no doubt he would have been as popular among the youth of Pakistan as Jaun Elia is today. PHOTO: YOUTUBE

Today marks the 44th death anniversary of maverick Pakistani poet Saghar Siddiqui, who died from an overdose of morphine on the streets of Lahore, the city where he found a home after migrating from India to Pakistan in 1947. He was only six years short of turning 50, joining the ranks of legends such as Asrarul Haq Majaz, Saadat Hasan Manto, Miraji and Mustafa Zaidi, who were equally consumed by the callousness and opportunism of a predatory system.

Had Saghar lived longer, I have no doubt he would have been as popular among the youth of Pakistan as Jaun Elia is today, if not more. The fact that Saghar was born in 1928 also makes 2018 the year of his 90th birthday. One hopes he will get more recognition as we gradually move towards the centenary of his birth in 10 years’ time, away from the mere ritual of Saghar lovers who throng to the Miani Sahib graveyard every year come July 19th to pay their respects at his last resting place.

Few people know that the poet who is best known for ghazals celebrating his angst and anomie, also wrote a national anthem for Pakistan – which eventually lost out to Hafeez Jalandhari’s version – as well as a few poems on the opportunism and corruption he could see and feel around him in Pakistan of the 50s. One such poem is Pakistan ke siyasatdaan (the politicians of Pakistan), which I am offering here in my original translation from Urdu; not only in the hope of stimulating a new readership for Saghar’s work, but also by way of an Election 2018 Special, given that Pakistan’s national elections are just under a week away.

The poem speaks to me, for despite the fact that it begins pessimistically describing a dismal state of affairs – which we in Pakistan are still witnessing in 2018 – it presciently deconstructs our politics (dependence on dollars, as in foreign aid) and politicians, whether it is their style of speaking in the tone of innkeepers, or how even those who profess to be devout are corrupt to the core. Perhaps what is most striking in the poem is that despite the personal angst Saghar was facing those days, as well as that of the nation at large, he concludes with optimism, asking the youth to play a more active part in saving Pakistan’s destiny.

One wonders what Saghar would have made of the 2018 Elections and the various party manifestos on offer, had he been alive today?

The chain of grief is around the feet,

The fate of the nation is cloudy.

Hunters are clothed in the garb of leaders.

Politics has set a trap,

Their racket of livelihoods is running well.

They suck the nation’s blood, laughing,

They worship desires in place of God,

They weigh the law in dollars,

And speak in the tone of an innkeeper.

Plunder is the method of the faithful;

The devils forgot the method of the Quran.

Arise youth! Save the nation,

Save the garden limits from the sparks of ruination.