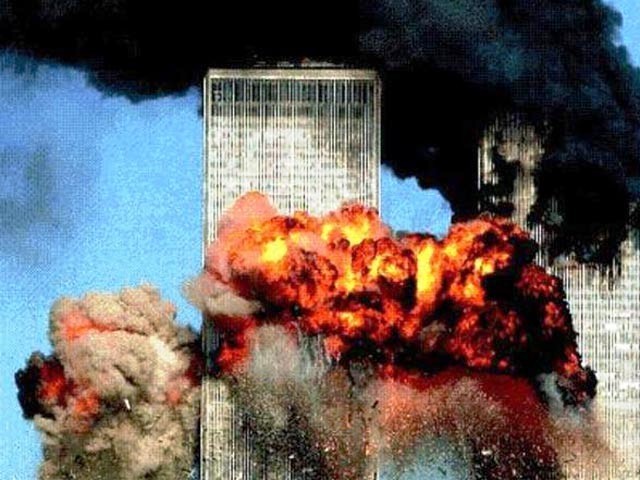 The attack on the Twin Towers claimed hundreds of innocent lives

Playwright and poet, nay poet and playwright, (lest he objects to the former order of his talents as did the revered Ahmad Nadeem Qasmi to Faiz Ahmad Faiz’s reported assessment, giving third place to his poetry, after his newspaper columns and short fiction)  Sarmad Sehbai, is not a man of politics. He is a social beast though and reacts, if at all, to political events in that context only. Politicians interest him, but only as stage characters in their various masks and costumes. As an artist, the fall of the Twin Towers in New York which shook the world in its aftermath made sense to him only in terms of a monumental visual the awesome collapse created, signifying the graphic fragility of power. Nine-Eleven hardly ever figured in his pet stories; he took no interest in the conspiracy theories making the rounds. But the image of the fall remained etched on his poetic perception. He took time, a decade to craft a poem about it.

We have poets whom minor provocations can cause to burst into endless verses. The Pakistan Academy of Letters produced a bulky tome on the 2005 earthquake. Poets took no time in making their contributions available when they were requested. It was indeed a national tragedy and had moved every sensitive heart. Even journalists had written with feeling about it. But the poetry that was occasioned by this tragedy of immeasurable proportions had the taste of an improvised dish from last night’s left-overs.

Sarmad’s poem ‘The Fall’ about the dated incident, is uncharacteristically political and goes against the grain of his own art values. The illusiveness and ambiguity and that stroke of the artist’s brush that separates a painting from a picture are not there for instance. Here is Sarmad making a statement instead of erasing one, that he would normally be doing as a poet’s job. The spatial derangement of the lines depicting the ‘fall’ though much in fashion among modern versifiers looks contrived and as a prop, I feel, does not go far in promoting the poetic image. I haven’t seen Sarmad employing it before. But then the nine-eleven incident has been bleached of its poetic hues entirely through a decade of what one may rightly call a case of overkill. Poetic vision alone can now handle it figuratively for descriptions have so blurred the actual image and stories have so distorted history that except for the direct victims who can relate to the event or the politicians who use it to justify revenge expeditions, no one knows with certainty what really happened; though one might know why. Sarmad’s poem too deals with the ‘why’ part of the story — the known part that poets discard to subvert the sarkari account. The last line is the moral of the story.

Here is the poem with the demolished lines restored to save space:

Trees shed their yellow leaves and roads are covered with fallen flowers. Men already shaved and dressed are at work places. Children are at schools and mothers are watching the morning shows. The day appears as any other day.

The world witnesses / a Sky Theatre/

Wonders of the world Proud  monuments

Of human progress Pillars of civilization

Twin brothers born From the thighs of

Those who walk the earth /With rude feet  /Awaken the dead

They jump and fly /And strike /Only once.

‘I am I am,’ said the jaundiced parrot.

‘I am I a a am mm..a…aa…mm..’ The deafening drone echoes through the tunnels of history.

Man is bitten by man,’ babbles the world in delirium.

Women in rice fields, among whining babies, in the Sahara, near the river, hanging to the coconuts, among the blues, the collectors of honey and spices, all had warned./Warned the beheaded guitars, the mystical drums, and the paint on the canvass. /Warned the dreamers, tracing the veins of dreams Warned the feet that danced/ Warned the   hands writing poetry, hands scratching the wall. Warned the hermaphrodite in  androgynous voice. /Those who were told to forget, /Those who inherited amnesia had warned. /Warned the children with stones in slings/Warned, the thousand paper birds, made by the charred girl  /Warned the weeping walls of the hospitals

The glow worm in the evening, the butterfly in summer, the dew drops and the stars, doves of the forests, the wave of the sea and the first cut of the moon had warned.  The rain in its dripping silence, the honey bee in its drone, the cloud bending on the window and the ant crawling under the feet of the elephant had warned.

No one listened. /They were busy, forgetting.

Kneeling at the threshold of ruins they cry, ‘We’ll wait until you come out of the debris.’

Photos of the loved ones fade in sepia of memories. Flowers leave their fragrance.

The Elephant is dead,’ they say.

‘The ant would spend ten generations to burry him.’