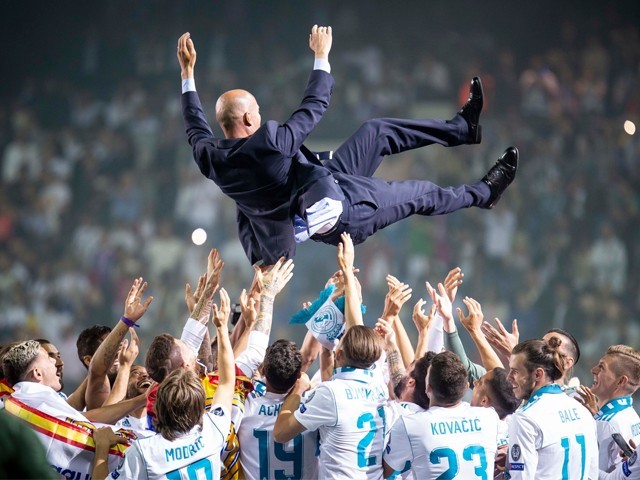 Real Madrid coach Zinedine Zidane during the celebration of the Thirteen Champions League at Santiago Bernabeu Stadium in Madrid, Spain. May 27, 2018. PHOTO: GETTY

Today, when you think of Real Madrid, you can’t help but mention the UEFA Champions League (UCL). Three in a row and four in five years is not an easy feat to achieve. However, the word impossible changed for Real Madrid a little over two years ago.

After Carlo Ancelotti’s shot in the dark and thanks to Sergio Ramos’s unforgettable header at the 93rd minute, Real Madrid managed to earn La Decima. The season that followed, however, made everyone question if this team even deserved to be the Champions of Europe. Due to reckless decisions made by our former manager, Real Madrid faced an embarrassing trophy-less season, which led to Ancelotti being fired. Rafael Benitez’s short-lived stay at Santiago Bernabeu is still remembered, many questioned Florentino Perez’s decision to change managers mid-season, but the decision was already taken and in came Real Madrid’s very own superman, Zinedine Zidane.

-Took over from Benitez during a “crisis”.

-1st Manager to defend the European cup in the UCL era

Zidane came in with no experience of managing a top-tier team and just to reiterate, he came in mid-season when Real Madrid were already through to the last 16 in UCL. Not only was this risky, but managing a team like Real Madrid was no piece of cake. Take every player who is a master of their own skill, and put them together, that is what Los Blancos are.

With players like Cristiano Ronaldo, Luka Modric, Marcelo Vieira, Sergio Ramos, Toni Kroos and Gareth Bale all in one team, keeping all of them happy is not a job for everyone, let alone someone with zero experience. However, what happened next is probably not short of a miracle. Zidane not only managed to bring every player in the team together, he actually led us to victory in the Champions League that season. 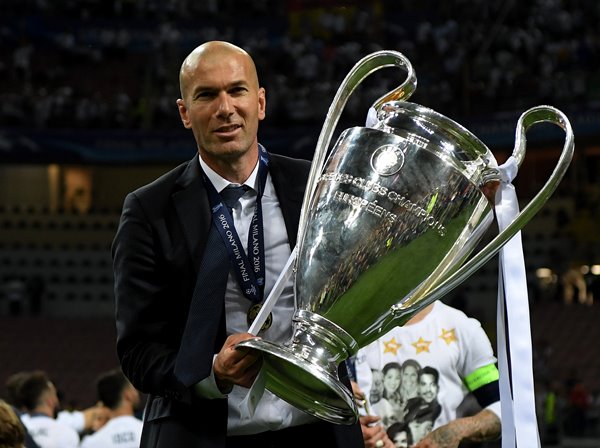 The next season started off with a bang. Win after win, Real Madrid did not spare any team. Even though Real did not finish off unbeatable, they managed to win the La Liga title after five years. Moreover, The Meringues were also in the race for the Champions League title twice in a row. No team had ever been able to do that, yet every Madridista knew in their hearts that this team was not your average team. With Zidane’s leadership, they were a force to be reckoned with. I remember having this conversation with a friend who is a United fan. He told me it can’t happen; it’s too far-fetched. 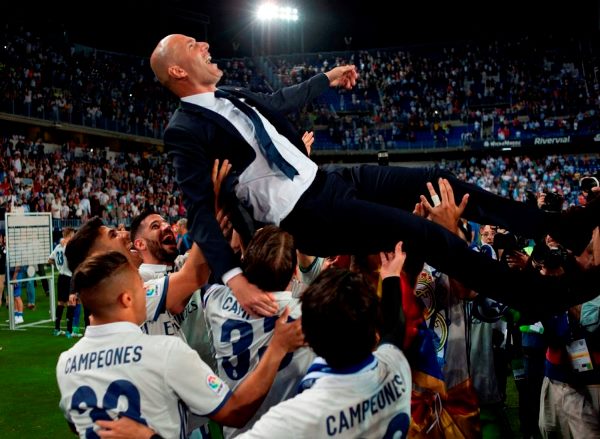 Real Madrid’s French head coach Zinedine Zidane is tossed by players at the end of the Spanish league football match Malaga CF vs Real Madrid at La Rosaleda stadium in Malaga on May 21, 2017. Photo: AFP

Not only that but we were facing Juventus, who were in top form and probably hungrier for the title than us. But what they didn’t know was that this team had forgotten how to lose. And so, Zidane became the first manager to defend the title in the Champions League. That stellar season led to Real Madrid winning five titles: the European Cup, Club World Cup, UEFA Super Cup, La Liga and the Spanish Super Cup. 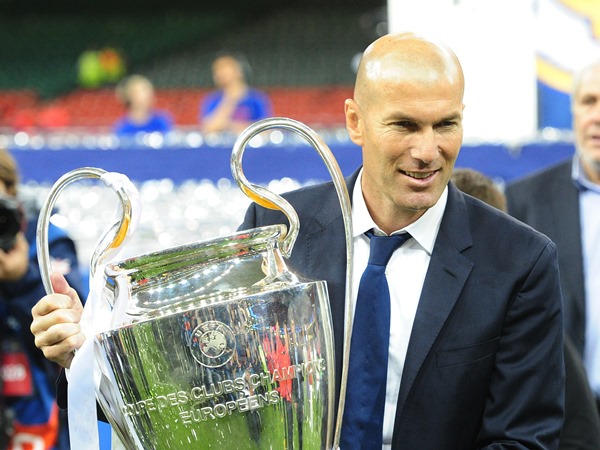 This last season was probably the worst Real has seen in a while. Getting kicked out of the La Liga race early on and without any major trophies to their name, Champions League was all that they had left. There were questions about Zidane’s tried and tested approach in games. His strategies were old and it seemed he wasn’t basing his games on tactics but the players he liked. Lucas Vasquez’s presence in many games last season seemed to be frowned upon by many, especially since he had been performing pretty average most of the season. His repeated diamond formation was being criticised. Other teams were catching upto Real’s tactics and it seemed like Zidane couldn’t find a way to beat them.

This is probably the reason why people supported Liverpool to win the Champions League final. Not only was Mohamed Salah playing exceptional football, the Reds were displaying masterful tactics. But the Gods of fate had something else in mind.

Zidane used his lethal weapon Bale and sent him off to the field after which, history was made yet again. The Whites lifted their 13th title; third in a row, and Zidane became the first manager to defend his title, not once but twice. 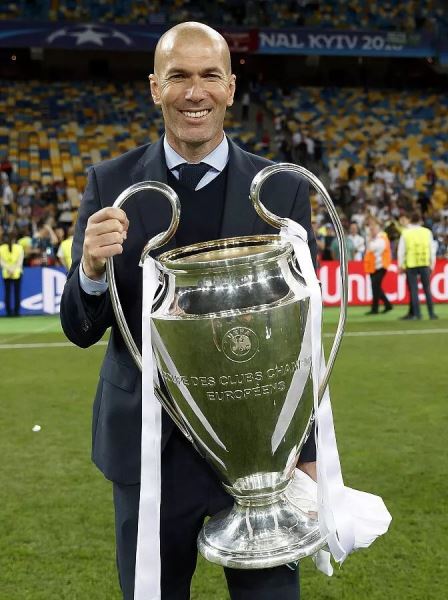 The news of his departure from Real came when I was going home from work. At first I thought it must be a joke because he just won the Champions League; all those rumours of him being sacked because of a trophy-less season should have been dropped. However, it was true and five days into winning the Champions League, Zidane decided to leave.

He believes that a change is required if the team was to continue winning.

“After three years [Real] need another discourse, another working methodology, and that’s why I took this decision,” he said. “I think it’s the moment to go and I also think the players need a change. They’re the ones who fight on the pitch. It’s not easy for them; it’s a demanding club, a club with a huge history and the players are always squeezed, we always want more and more and there is a moment when you think: ‘Well, what more can I ask of my players?’”

It makes sense for him to leave now at a time when he is at the peak of his career and has secured massive respect from the world due to his achievements at Real Madrid. He has three European titles, two FIFA Club World Cups, one La Liga title, one Spanish Supercup and two UEFA Supercup to his name, in just a short span of a little over two years. He knows well that he isn’t the best tactical manager out there; he just knows how to keep players happy, which seemed to have worked for him till now.

It is better for him to go like this and be remembered in good memories than stick with Real and see the club go downhill, which is pretty likely considering Real’s recent abysmal performance in La Liga this season. Finishing 17 points behind rivals Barcelona and being knocked out of the Copa del Rey by Leganes, Bernabeu was in absolute chaos. Zidane knew what was coming and he did not want to stay and become a part of Real Madrid’s downfall. 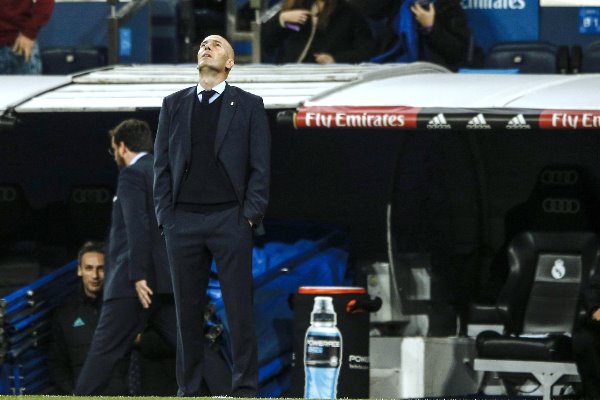 Real does need change; every club needs it after some time. If a team is stuck in the same place, in limbo, it collapses at one point or another. Case in point: Arsenal, once invincible but now struggling in their own league, and a lot of that is due to having the same manager for 21 years. The same tactics and the same strategies become redundant; a new manager brings with him a new set of eyes and a new game plan, which is absolutely necessary in football.

The news of him leaving was sudden and I couldn’t help but feel utterly sad about it. Zidane was not just a manager, he was family. Seeing him leave is hard but when looking at the bigger picture, it seemed the right time for him to say goodbye. Every Madridista will hold him in the highest of accolades and he will always be remembered as our legend, our miracle worker and our saviour. 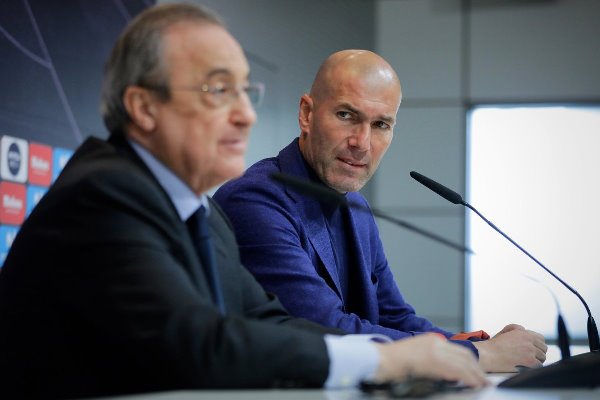 Thank you Zidane for the amazing three years you gave this club. When you joined, Real Madrid was just one of the top clubs in the world; you made it the best in the world. Whichever new manager Real decides to go with should probably be warned; he is going to have to fill in some big shoes. Whatever future holds for him and whichever path he takes, I hope he is always successful.

Good luck to you, Zizou!