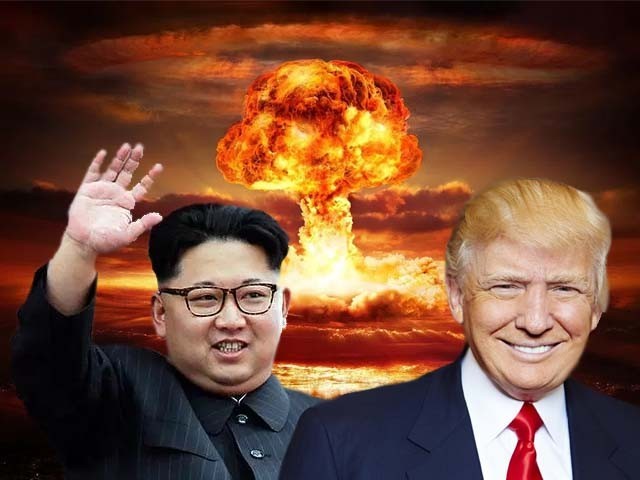 Where we will end up if two crazy men go at each other like mad dogs and end up triggering a nuclear catastrophe?

Call it a coincidence or an irony of fate, but I was in the process of winding up my study trip to Japan when my editor asked me to write about the latest episode of the US-North Korea war of words that seems to be taking a nasty turn each passing day.

I say coincidence or an irony of fate because the month of August marks the 72nd anniversary of the US dropping the nuclear bomb on Hiroshima. Traveling through Tokyo, Osaka, Nagoya, Kyoto, and of course, Hiroshima, one felt a sense of sombreness. You could see the sadness that engulfed the minds of the past generation and present-day Japanese, as well as the feelings that compel them to say “never again” to nuclear weapons.

So when I heard Donald Trump intensifying his “fire and fury” rhetoric, warning North Korea that they’ll have to pay a heavy price if they ever dare to cast an evil nuclear eye on the US, I scratched my head in bewilderment. I wondered where we will end up if two crazy men – one in Washington and the other in Pyongyang – go at each other like mad dogs and end up triggering a nuclear catastrophe.

In Trump, Kim Jong Un has found the most receptive and responsive ally. Previously, the US presidents were calm, quiet and calculated in their responses to North Korean war mongering. Furthermore, they were strategic and didn’t feed off of the statements of bluster or threats issued by the Pyongyang leadership.

Trump, however, is unique. He believes that his biggest virtue lies in his unpredictability. His statements hurt the core of US strategic alliances, diplomatic overtures and whatever good there is in America. Trump is bad news for those who believe that despite its untamed ways, North Korea still understands diplomacy, whatever channel it may be through.

We must accept North Korea as a nuclear state. As a long time North Korea watcher, it is my view that being nuclear is their ticket to survival and we should accept this reality. One would love to see a denuclearised North Korea but that’s not happening.

The threat from North Korea – a potential strike on US soil by long-range ballistic missile equipped with a nuclear warhead – is serious. Since there is a madman aspect to North Korea’s leadership (and the US leadership at the moment), one should not be complacent about this. The reason so little can be done pre-emptively against North Korea is that Seoul (and 50% of the people and wealth of South Korea) is/are just 35 miles south of the Demilitarised zone (DMZ) and vulnerable to massive conventional (not just nuclear) bombardment by artillery that has been assembled by North Korea.

The US cannot keep pushing back Pyongyang’s nuclear ambitions. Instead, it should try to make smart overtures like it did in Cuba. The US had an in-residence diplomatic presence in Havana to maintain bare minimum contact, but in reality, it was gathering invaluable information to send back to Washington. Information is the key and a critical part of any negotiation process. It may not lead to the denuclearisation of North Korea but at least it will keep the doors of negotiation open.

Trump is doing the exact opposite. Rather than gaining the trust of China in the Korean crisis, he has set up his own threat pulpit much to the chagrin of his own advisers and President Xi Jinping, who happens to be a tough nut to crack.

We are dealing with a number of unknowns, thus making the situation even more complicated. Some examples are the North Korean decision-making process, its nuclear controls, and what may set Jong Un off to order a nuclear strike. Furthermore, since China happens to be Pyongyang’s closest ally, it is practical to have a serious conversation with Beijing regarding the Korean peninsula beyond simply focusing on the nuclear issue. We need a grand bargain between the US and China to make any mentionable headway vis-à-vis the Korean mess.

Trump’s modus operandi is based on making empty threats. He has a history in this field as a businessman and a Barack Obama hater. Furthermore, he is also a master distractor. By indulging in hostile verbal engagement with North Korea and pointing towards possible military action in Venezuela, Trump has moved public attention away from the on-going Russian investigation. As luck would have it, however, the limelight over the past weekend has shifted to Charlottesville. Here, Trump’s inability to condemn domestic terrorism has made many question his moral commitment to the presidency. Consequently, it has also raised doubts over whether Trump has his hand in glove with the white nationalists.

Will Guam get pummelled by the Hwasong 14 missiles? People in the know say that while the North Korean threat is real, an attack won’t happen. North Korean threats are nothing new, and over the last 30 years or so, people in places like Japan and South Korea have lived with this nonsense. The only visible difference this time around is that we have a US president who is refusing to back off and continues to increase the tension levels.

It is understandable that the US can brag about its military might and Trump can by all means say that North Korea should be nervous if it decides to act against the US, but he doesn’t quite realise the cost of the tragic consequences of waging an attack against Pyongyang. Granted that Jong Un is unstable, but Trump is by no means demonstrating moral leadership by his inciting remarks. To quote Hillary Clinton:

"A man you can bait with a tweet is not a man we can trust with nuclear weapons." —Hillary

At a time when the world needs strong leadership, statesmanship and initiators in terms of establishing peace, Father Time has “gifted” us with the Dutertes, the Theresa Mays, the Putins, the Erdogans, the Maduros, the Jong Uns and the Trumps. Violence, bigotry, racism, hostility and the use of aggression will get no one anywhere.

Trump’s arrival on the political scene has not only emboldened the ugly and the angry within the US, it has also provided impetus to international players who were far less vociferous previously. Jong Un is one such example and he’s found the perfect match across several seas and oceans.

It is now up to the forces of sanity within the US administration to clean up Trump’s mess and ensure that Jong Un’s craziness is contained in a timely and effective manner. As for us in the US, we will continue to take the good with the bad until the day Trump stops running his mouth, the possibility of which seems highly unlikely. Nevertheless, there’s no harm in hoping that another Hiroshima never happens again. Perhaps Trump can visit Japan, lay a wreath in the Hiroshima Peace Memorial Park and pledge to work for world peace without any constructive ambiguity.

Is that too much to ask?