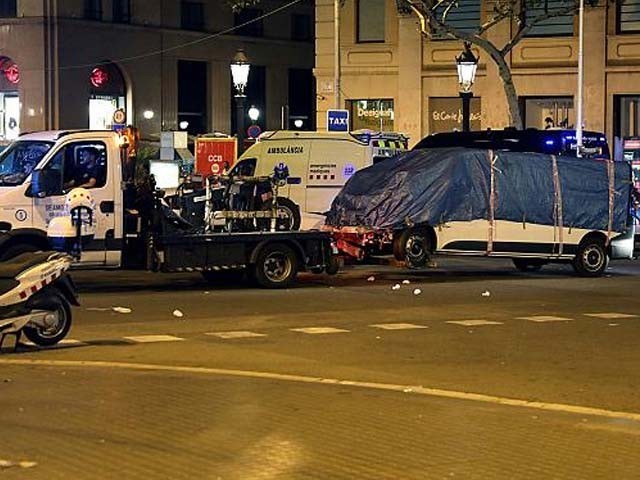 The fact that vans are are easily accessible and they do not require much of a background check has been one of the main reasons for an increase in vehicle terror attacks. PHOTO: REUTERS

The horrific events this week in Spain and Finland are a tragic recurrence of major terror incidents in the western nations. Once more we bear witness to the sort of nihilistic savagery that indiscriminately murders innocents with impunity.

Let us be very clear about this. Those who carried out these attacks are not just murderers, they are immoral ingrates who have slaughtered the citizens of a nation that took them in and gave them the opportunities their own countries had failed to provide them.

The fact that vans are are easily accessible and they do not require much of a background check has been one of the main reasons for an increase in vehicle terror attacks. Furthermore, they are also cheap, cause great damage and are a convenient way to flee the scene.

It is evident that vehicle terror attacks are slowly replacing suicide bomb attacks due the aforementioned reasons.

Not only must these criminals be punished, the trail that leads to their handlers, their financiers and their recruiters must be followed to the very end – no matter who they are or where they are.

It is also time the world started to rethink its counter-terrorism policy because whatever has been done so far has not only failed, it has amplified the problem.

For too long, the focus has been on the nebulous constructs of ‘radicalisation’ and ‘ideology’. I feel that chasing the smoke trails of dogma will achieve nothing unless the actual players in this grotesque parade of death and terror are neutered.

This wild goose chase has protected from accountability the dictators and monarchs of the Middle East whose brutality and stifling of free speech has done nothing but incubated terrorism. It takes the attention away from the government and institutions – both political and religious – from Pakistan to Saudi Arabia, who champion sectarian and anti-western sentiment to suit their political needs.

Over the years, it has allowed a glossing over of the role the 2003 invasion of Iraq played in creating the arena of chaos and the deluge of armaments that enabled the rise of Islamic State (IS).

It leaves unscathed the internet cabal of IS recruiters who disseminate the atrocity exhibition of their propaganda videos globally. And they seem to have no problem in luring Muslim youth from all over the world and graduating them from some crash course in violent extremism.

It is self-evident that the weapons, political intrigue and invasions of powerful nations are the immediate triggers for much of this modern violent extremism. But it is equally true that it is the disunity, intolerance and sectarian sentiment among Muslim societies that provides saboteurs the flames that they easily pour gasoline on. The song remains the same: It was ‘divide and conquer’ then, it is ‘divide and conquer’ now.

It is that vile loathing of Muslims by Muslims that allowed the US and Israel to ship arms to both Iran and Iraq during their decade long bloody war. It was the existing ethnic and sectarian fault lines in Afghanistan and Pakistan that allowed the US and Russia to fight a proxy war through them for 11 years. This war gave these religiously-themed militias a grand stage with a global audience and kicked off a global jihadi enterprise that had never existed before.

It was Iraq’s asinine invasion that facilitated the first Gulf war. Al Qaeda claimed that the war and stationing of US troops near Hijaz was its primary reason for organising and attacking western targets. And it was the willingness of Gulf States to support – and the failure of the Muslim world at large to forcefully resist – the second Iraq invasion of 2003 that unleashed the unprecedented brutality of the group psychopathy known as Daesh.

This never was or will be a clash between Islam and the West neither is it in any form or fashion a global pan-Islamic insurgency. What global agenda could those busy-slaughtering-their-own possibly pursue?

In the final analysis, I believe this is a problem arising from the fractious societies and destructive leadership of Muslim majority nations. The fallout in the rest of the world is a direct outcome of the intrusion and positioning of the US, Europe and Russia into these conflicts through war and transfer of weaponry.

A solution to global terrorism will be predicated on political reform in the Muslim world. For the citizens of these nations, unity is the only way tyranny, terrorism and imperialist ambition will be thwarted. Peace will remain a dream unless sectarian, tribal and ethnic divisions exist.

For the West, the best possible course is to pressure their leadership to stop supporting and arming the most brutal regimes in the Muslim world and to cease their ambitions of exploitation and geopolitical game of chess. Interventionism has gained the world nothing but more bloodshed and strife.

Just like Muslim nations must cease differentiating between good and bad terrorism, the West must stop justifying its hegemonic ambitions such as human rights or security contingencies.