Memories of the Gulf War 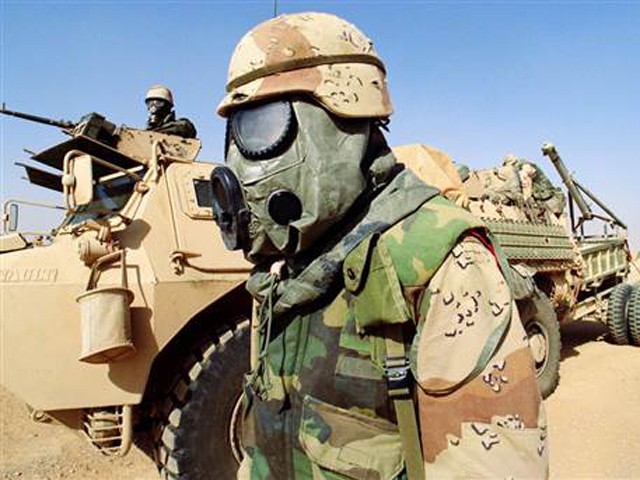 The American Patriot missile intercepted the Iraqi Scud with precision. The explosion is loud. PHOTO: AFP

It is 1991. I am nine years old, standing in line with my father at the checkout counter of Fahad Supplies, a convenience store near my home in Dhahran, Saudi Arabia. The line isn’t long, but I am impatient: I want to tear at the hotdogs, fries, and the coke my father is carrying.

My eyes dart at the cashier with dislike. He is an overweight Indian man, with a thin moustache, smug smile, and froglike eyes. In the afternoons, when I come here alone to buy bread, I often reward myself by flipping through the sports magazines. Of course, when Frog Man catches me, he gets upset, and glares.

He now looks at me waiting with my father, and flashes me a big smile as if we are great friends. My father, with his Tom Selleck moustache, is my rock, and Frog Man only smiles when I am with him.

Finally, our turn is up. My hands eagerly place the groceries on the counter. Visions of hotdogs covered in gallons of ketchup enter my head.

A terribly loud wail splits the silent night. It sounds like a ravenous hell hound, screaming in agony. Afraid, I instinctively grip my father’s arm. He looks concerned.

The cashier is now staring out the window at the clear night sky, his eye balls ready to pop out. My nemesis seems to be in a trance.

The cashier finally breaks out of his funk:

With a look of panic on his face, he gets up clumsily, scrambling to shut the store down.

My father grabs my hand and moves quickly for the door. Glancing at his other hand, I feel relief; he hasn’t forgotten the hotdogs.

It seems to be coming from every direction, and my question is barely audible over the noise.

People have stepped out of their homes and shops, random cars have come to abrupt halts. Everyone is staring up at the nocturnal heavens.

A rocket bolts through the night, leaving behind a trail of smoke and fire. As I stare, the rocket gradually seems to be getting larger. It is heading in our general direction.

The cashier from the convenience store is standing behind me. A scary looking mask covers his face, though I can still make out his hardboiled eyes. I recognize the gas mask from a documentary on TV.

Mesmerized, no one has moved. In class, the history teacher told us that war is a theatre. Well, if is, then we have front row seats for the evening show.

A second actor shows up in this dangerous play. It is another rocket, flying much faster and lower. It seems to be heading for the Scud.

The American Patriot missile intercepts the Iraqi Scud with precision. The explosion is loud, and the bright debris expands like a flower blooming in fast motion.

We are safe, for now.

But this isn’t one of those Hollywood movies I watch with my mother. Random couples don’t start making out with joy, onlookers don’t break into spontaneous applause. This is real life, and real life has changed in Saudi Arabia.

I see the light on in my kid sister’s room. I walk in, and she is lying in bed, her eyes dazed. Over the past week we have had more terrifying experiences, including a low flying Scud barely missing our roof, and demolishing a post office next door. The house shook fiercely that day. Confused and scared, my sister is having trouble sleeping.

She looks like she needs a hug, but I am going through my macho phase.

I start picking up all her toys, one by one. I take the giant elephant, and place it next to her shoulders. I grab her teddy bear, and place it near her hand. Wide-eyed, she looks at me wordlessly.

Minutes later, she is surrounded by toys. But the finishing touch remains. From my room I come back with my most prized possession, Voltron. Made almost completely of die-cast metal, this robot is huge, and the envy of my friends. I don’t let anyone touch him.

I place Voltron near her feet, and say:

“Okay these are all are your soldiers. They will protect you all night so you can sleep.”

My sister nods solemnly, believing every word I say.

Minutes later I sneak back into her room.

I grab Voltron quietly – I need help falling asleep too.