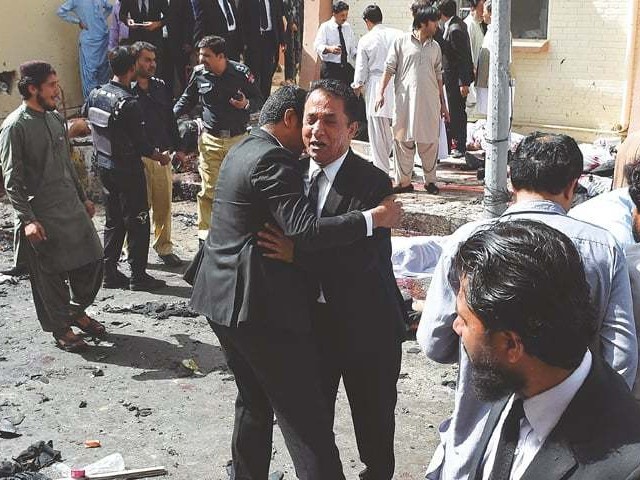 Lawyers react as they gather at the scene of the suicide attack on the Civil Hospital premises. PHOTO: AFP

There is the pungent smell of spices, the unguent waft of cooking oil, and the acrid bite of car exhausts – clinging to the faint breeze that is desperately trying to cleanse this city of its daytime humour.

The clamour of voices starts to rise as the mosques empty after prayer; car horns constantly bark out their warnings to everyone but those for whom they are intended, and all of a sudden the dark brings with it the horrors Quetta witnessed on the August 8th. Undoubtedly, the darkest day in Balochistan’s history, when our beaming future was snatched away after the ghastly bomb detonated, leaving Balochistan paralysed, in a calamity of the worst kind.

Quetta has been a victim of violence for decades. A city that was once based on the foundation of unity lost its principal element. The Baloch were always a continuous target of overt negligence and enforced violence, but those residing in Balochistan also are a victim of mournful consequences.

Be it Pakhtuns, Hazaras or the Baloch, people of Quetta have succumbed to one or other of the many shocks that regularly strike our beautiful city. Ethnic and sectarian tensions plagued Quetta recently, however, August 8th brought back the absent brotherhood amongst its citizens. The deaths of our brightest intellectuals once again united us all because only we are cognisant of our irrevocable loss. This time, we have to promise to fight the demons together and defeat the evil that tries to divide us.

We have always mourned alone, but this country’s media, political parties, and forces seemed to be completely complacent at our grief. A few talk shows for some days and condemnations are not enough to bring back Balochistan’s loss. The main question that arises is about what role the government and media are playing in the remembrance of the lawyers martyred in broad daylight. Not only do people who lost their families on August 8th need financial help but urgently need psychological help to deal with the grievous consequence of this barbaric attack. The Baloch youth is extremely pessimistic about their future, the scarcity of jobs and opportunities have disheartened them all.

With a future of lawyers so disastrous, is it not the system’s responsibility to encourage the youth to pursue the field of law and fight injustice? Scholarships should be given out to students who want to study the law and work for the silenced Quetta courts. The media is too occupied to bring such matters of importance to public attention. The neglect of the so-called free media has further fuelled the Baloch anger. Irrelevant matters of no importance are highlighted all day on TV channels but Balochistan is out of the picture unless there is news connected to the prosperous future of the CPEC or how RAW is trying to destabilise the region.

We do not want to be indulged in some petty vengeance, as a consequence of our forces depleted blame games. What we need are more lawyers to represent the injustices practiced in Balochistan on a daily basis. Our future has been snatched away; Balochistan should be on the top of the establishment’s priority list.

In Balochistan comfort does not hang well together – either in the mind or in the mouth. I know well that it will require at least a lifetime of work by many who have the authority and control to try and find the best solution for Balochistan to overcome this catastrophic loss. However, the question of whether efforts will be initiated to help deal with this loss is something that time will reveal.

Many people in Balochistan have accepted their predicament and recognised the dysfunctional system, where there is no protection or justice for the people of Balochistan. Those who want to fight justice through a democratic process are labelled as traitors who are scheming to promote nationalism. This accusation is just not limited to the establishment but used by ‘so-called’ freedom fighters that see the democratic process as a threat to their path to freedom.

What the common Baloch man wants is a progressive Balochistan where they can have control over their resources and have a secure future. For now, the future and the past of Balochistan appear bleak, unless of course, authorities really want to make a change in direction – before it is too late.