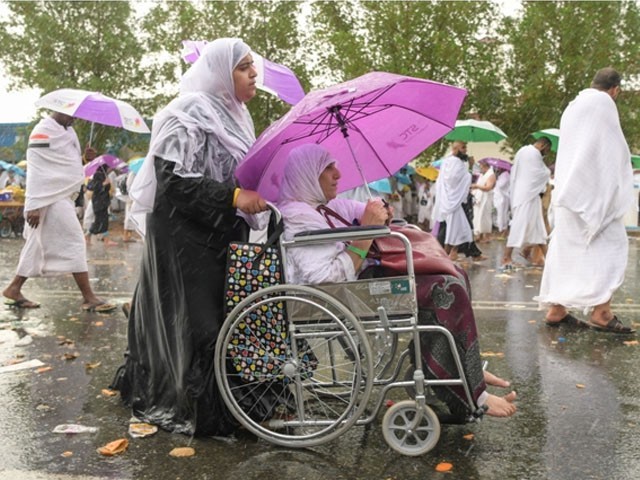 Muslim pilgrim walk in the rain near Mount Arafat, as the climax of the Hajj pilgrimage approaches on August 10, 2019. PHOTO: GETTY

(We will definitely go for hajj this year!)

This was my mother’s constant iteration since the beginning of 2019. Each time she would say this, I would inwardly cringe and make a silent prayer for this to not happen. I had heard hajj was difficult and some sort of a spiritual feeling was required from within. I didn’t possess even the slightest hint of the latter.

Despite praying so much for it to be called off, on August 5, 2019, I found myself entering the Islamabad airport. Since everyone on my flight was a hajj passenger, there were holy recitals the entire way, and when the plane crossed over the miqath, all the passengers burst into cries of labaik allahuma labaik. On August 9, 2019, I succumbed myself to expect the worst and became a part of the 2.5 million Muslims that moved into the tents of Mina.

Here is the thing. When you are a reluctant hajji, you don’t read up before you go. So when you see miracles happening around you, you are forced to question your preconceived notions. The most pleasant surprise for me, which was no less than a miracle by the way, was in Arafat. Where there was not even an inkling of a cloud, within 15 minutes, the whole sky darkened and it started raining, first in small drops and then a full-on pelt. Rain in Arafat was unheard of in living memory. Everyone came out of their tents; their hands towards the sky, their faces wet from a mixture of tears and rain water. This would be remembered as the year it rained in Arafat on the day of Arafat.

So were all my apprehensions about hajj true?

No. It was only while I was writing this article that I realised the impossibility of limiting the number of lessons that could be learnt from hajj. When people, upon my return, asked me about my experience, I could not give an immediate answer. With hajj being so recent for me, I am sure that many lessons will become apparent with time. But upon some reflection, I can safely say that hajj is a humbling experience.

Before going for hajj, a friend had told me about how people save up all their lives for it. For them, it was the endgame. I witnessed this first hand. Seeing old and differently-abled people walking determinedly in the crowds, I realised how incredibly thankless I was. People were helping each other in whatever way they could. Whether it was assisting in lifting wheelchairs onto buses or giving up sleeping space, everyone tried to make people around them comfortable.

Everyone is equal in God’s eyes

It did not matter if one was sleeping in a VIP tent or without cover on the mountains. We were all equal under the skies of Muzdalifa. After collecting the required pebbles and feeling a sense of accomplishment, I took a four-hour nap which was probably the most deep sleep I had had in ages. Maybe it was fatigue, maybe it was sleeping on the stones, I will never know.

Patience is the key to success

Perhaps the biggest lesson I learnt was learning sabr (patience) and realising how much I lacked it and how important it is for peace of mind. Imagine being placed with millions of people with different languages and cultural norms in a hot barren land with long food and bathroom queues. I learnt that sabr gets the job done faster, primarily because it makes one more accommodating.

In economics, we learn about how a human being has basic needs and wants. During hajj, I had not seen a mirror in days. My face had pimples and my lips were parched from thirst. I did not even care about the very visible twin shades that had appeared on my feet. A small sofa-cum-bed in Mina, a sleeping bag in Muzdalifa and a small bag for all my toiletries made me realise how my needs are much more basic than what I had made them out of greed.

Sitting inside a tent in Mina, in my self-exile from social media, I reflected on the insignificance of so many things which I had previously been worrying about and thought about how petty I had been on so many occasions. It made me realise the hypocrisy we all indulge in on a daily basis, not give important relationships enough priority, and instead, chase things we shouldn’t be chasing at all. ‘What is meant to be will be’ should be the mantra.

So what am I left with? I am left with memories for a lifetime, friends for life and a feeling of utmost gratitude. I am left feeling stronger than I was before. So as a previously reluctant hajji, I’d recommend everyone to go for hajj. The fact of the matter is that we are the guests of Ar-Rahman and He is the best host.

Ditch the chocolate cliché this Valentine’s Day and reinforce your love with these berrylicious desserts!