This Ramazan, develop an attitude of gratitude 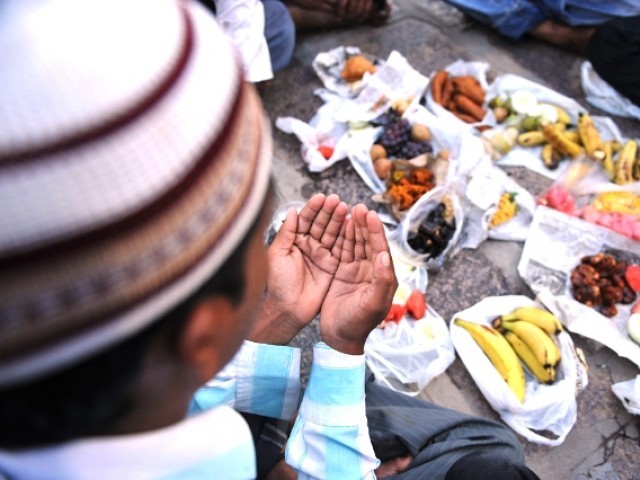 As Ramazan approaches, Muslims suddenly change character; they fast, read the Holy Quran and give charity. But as soon as it is over it’s as if Eid liberates them from their moral responsibilities they so fervently upheld in Ramazan.PHOTO: AFP

As I sit here writing this, I am exuberated with joy that Ramazan is almost here. We, Pakistanis, are always fashionably late; that should explain why we start fasting a day after most other countries do.

Anyhow! Personally speaking, Ramazan is my favourite time of the year. A month I exclusively dedicate to my relationship with God, focusing on spiritual growth and reflections. It would be great if every Muslim tried to make a conscious effort in changing some part of their personality that needs to be improved during Ramazan. But unfortunately, it is sad to note how each year this month is wasted, and so the primary purpose of this blog is to address those issues.

As Ramazan approaches, Muslims suddenly change character. They fast, read the Holy Quran, give away in charities, and try to avoid all the detrimental things they’ve become accustomed to. But as soon as it is over, they revert back to their ways of old, happily content that they’ve performed their religious rights and have pleased God. It’s almost as if Eid liberates them from their moral responsibilities they so fervently upheld in Ramazan.

So, here are the three things you should try to avoid this Ramazan:

Don’t take fasting as an end in itself

I’ve always thought of Ramazan as a training program, and this really helps me keep things in perspective. To elaborate my point, let’s take the example of an intensive revision class set up by your university to help you achieve your goal: passing the exam.

Now, here’s what happens: The students make it incumbent upon themselves to attend every class, but pay no attention whatsoever to what they’re doing. Having sat in these classes for a month, they expect the professor to be pleased with them for attending all his classes, hoping that he would pass them in the exam because of their dedication.

Unprepared as they were, they miserably fail the exam, and thus repeat the year. For many, this becomes an on-going process.

You probably understand the analogy. A major factor of why this happens, though, is because religious people tend to take their rituals and rights as an end in themselves, rather than taking them as a means to an end. They think, albeit naively, that performing these rituals somehow pleases God, and so they have no incentive to make an effort and derive any values from the rituals they perform.

The mere act of fasting, in no way, pleases God. This is an idea alien to the Holy Quran. Rather, the purpose of fasting is that it should teach us self-control, make us more conscious of God, and develop an attitude of gratitude. It is by these values, that we attain during Ramazan, that boosts our relationship with God and helps us in connecting with Him.

This is something that needs to be stressed a lot, before we come out of the Arab supremacy complex.

I realise how hard it is to pick up the Quran and read it, for the first time. So, for those of you that have never read the Holy Quran, the month of Ramazan provides an excellent platform. Presumably, your family members would already be reading the Quran this month, so the environment is all set up for action. However, I implore you not to make the mistake of reading the Quran in Arabic if you don’t understand the language. Indeed, that defeats the whole purpose of sending down revelation.

The purpose of the Holy Quran has never been to encourage people to read it for the sake of it, or to attain rewards. It is a scripture which was given to us so that we may enlighten ourselves and leave our ignorant notions behind. Needless to say, you don’t become enlightened by reading it in a foreign language.

As I wrote in a previous blog,

“What was supposed to be a book with a revolutionary message, you revolve around it, not understanding a word of what it says.

What was supposed to be a book that was meant to transform your heart, you don’t even let it cross your brain.”

If you’re looking to read the entire Quran this month, then let me do the math for you. There are 30 juz (parts) in the Quran, each juz consisting of roughly 20 pages. So, 30 days and 30 juz – still with me? Good. Now, this would mean that one juz should be read every day – 20 pages. Yeah, not so much, is it? You could easily complete the Quran in 30 days.

Of course, there is no ‘rule’ that you have to read the entire Holy Quran during the length of the month. Read whatever’s easy to read. Quality over quantity, always.

If you intend to attend Taraweeh, do realise that although these are optional, they’re a great way of reviewing the message of the Quran in Ramazan. I’ll repeat this again: please don’t just stand there for the sake of it, having no idea of what is being recited. It defeats the purpose. Take your translation with you to the mosque, or if you don’t have one, you could always download it on your cell phone and take that instead. Whatever you do, make good use of it.

As per popular opinion, spending in the month of Ramazan supposedly earns more rewards as it is deemed to be a ‘blessed’ month. But to donate money in hopes of accumulating rewards is very paradoxical indeed.

The purpose of giving is just that: giving! No more, no less.

We should help others, not only in Ramazan but all year round, simply because it is the right thing to do. It is what the soul yearns for! Expecting ‘rewards’ for our service makes the whole process unnatural. It’s no more about benefiting others anymore, it becomes self-centred. The ego comes in,

“What can I get from this?”

Spend, because the other person deserves it. Understand his condition, and give selflessly. Suppress the ego, and boost your soul. Be altruistic!

In the famous words of Rumi,

“When you do things from your soul, you feel a river moving in you, a joy!”

It’s always best to maintain a balance, and Ramazan is no exception. Don’t burn yourself, but don’t waste it either. What are the goals you wish to achieve this Ramazan? Jot them down, now! Written goals are easier to review and evaluate progress.

A major theme of the Holy Quran is that of accountability, self-control, and being conscious of God. If you think about it, these are the values that fasting should help us internalise. And if one internalises these values from the core of their being, then nothing could steer you towards wrong-doing.

This Ramazan, regain control of yourself!