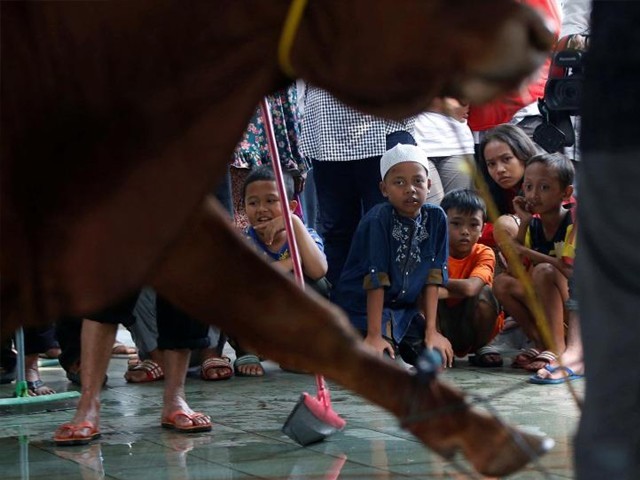 We do not explain to them the religious background of the ritual but hand them knives to begin the qurbani. PHOTO: REUTERS

Children from the entire area had gathered on the roadside, nearby a lavish bungalow in our community. A sacrifice was about to be offered in the name of God.

I looked at their faces: frantic, joyous, excited, confused and clueless. I couldn’t help but wonder, how many of these kids have an idea about what was going to happen? By the look of it, it seemed that they were surrounding the giant camel and the butcher merely for the thrill.

I walked a bit further and saw pre-teen children proudly petting their camel. These were children who owned the camel and were proudly showing it off to other children. However, this wasn’t the kind of pride with which you show your new puppy off to a bunch of friends. This was a price tag war between the children, with their parents actually promoting it. I had no option but to leave when the eldest child of the family, a pre-teen, was forced to hold the knife against the camel’s neck before the butcher did his job, while the children surrounding them gasped, clapped, cheered and screamed.

First things first, gathering the children of your family and forcing them to watch their animal’s slaughter is not a religious ritual, it is a cultural ritual. Let’s just draw this distinction once and for all. It’s a cultural practice. Period.

Now the problem with such sacrificial rituals is that most children are not given any context regarding why the animal is bought, what’s going to happen with it, why it’s going to happen, and where is the element of sacrifice. Instead, what do we teach our children? We make them passive participants in this capitalist price tag war between adults. We indirectly convey that the more expensive, bigger and healthier your animal is, the more valuable you are as a person.

We do not involve our child in the relatively more important parts of the ritual such as making portions of the meat and teaching them about the appropriate portions for charity, neighbours and relatives. We do not explain to them the religious background of the ritual but hand them knives to begin the qurbani, leaving them confused and clueless amidst so much blood. We encourage our child to cheer, applaud and enjoy while a living animal writhes in agony with a half-butchered neck.

Even as an adult, I cry at the pain inflicted upon these animals. They haunt me for despite being immune to seeing so much violence in this country. What about the children who have seen nothing? How do they comprehend those screams and agony without being given any context?

At an event for children, I remember asking a bunch of four to 11-year-old children about Eidul Azha. All the kids knew that we slaughter animals on this Eid, but not even one could tell me the context. I asked,

“Why do we slaughter animals?”

To which a five-year-old replied naively,

“So we can enjoy barbecue!”

To my surprise, all of them remembered the names of the animals they had sacrificed. They were still attached to the animals; in fact, at one point, the discussion got too much for a six-year-old to handle and he started crying.

We are harming our children incredibly by involving them in the sacrificial ritual without providing context. Having to let go of a beloved pet can lead to separation anxiety developing in children along with giving birth to an irrational fear of whoever they love ending up dead. Of course, it won’t happen to each and every child.

Some children develop aggressive tendencies towards animals as a way to cope with loss, since no attachment will mean no loss. Children are naturally tender to animals, and when they are not, we term it as one of the major symptoms of a conduct disorder, which is sort of a pre-requisite for an anti-social personality disorder in adults. You may have seen children being brutal to cats, dogs, birds and so on. Additionally, many children develop sleep-talking, bed-wetting and nightmares post-sacrifice due to the abrupt exposure to blood and slaughtering.

The cultural ritual of involving children in this practice lacks soul. It’s mere performance and makes your sacrifice just a performative act. Those who care about the well-being of their children refrain from exposing them to the sacrifice directly and abruptly, unless the child understands the context of the ritual and willingly requests to be an observer.

A colleague of mine starts giving the context of the Abrahamic sacrifice to her children every year as soon as Ramazan starts, so much so that her children now know the basic philosophy and rationale of the entire practice. They embrace the animal on the day of sacrifice and are not allowed to come out of the room until everything is cleaned up.

Another acquaintance does not keep the animal at his house and carries out the qurbani ritual elsewhere as well, so that the children don’t have to go through the phases of attachment and grief.

There are multiple ways to not cause damage to your children’s emotions. They shouldn’t have to go through this trauma for your mere cultural ritual. The philosophy and essence of the ritual may or may not promote animal cruelty, it all depends on the way people practice it.

We try to keep our children away from violent movies so they are not scarred by them, and yet give them a live show of mass animal slaughter. Our children are innocent, let them stay that way. In a country like Pakistan, where there is no regard for mental health, we do not realise the psychological damage we are inflicting on our children. Celebrate Eid the way it is meant to, yes, but please, not at the expense of your child’s mental health.