Why sacrificing animals on Eidul Azha is a good ritual 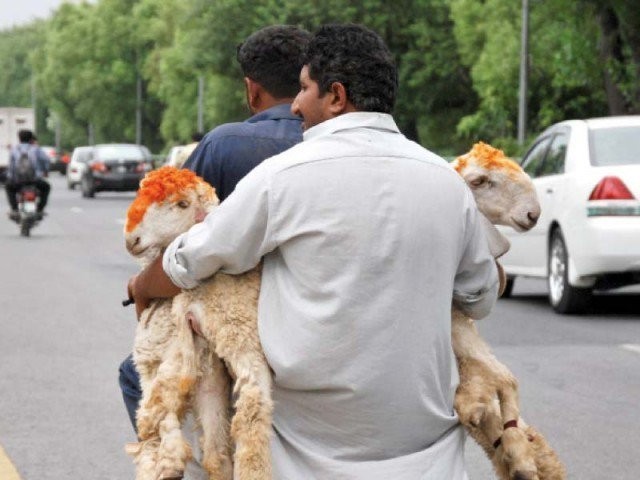 Is everyone noticing the drastic reduction in the number of houses from which the familiar bleating sounds of goats and the authoritarian moo of cows can be heard this year? If television reports are to be believed, there are more animals available in the market for sacrifice than there are buyers.

The reasons are many, and some of them are valid. Exorbitant asking prices of sellers are one. The portion you get in a cow is as expensive now as a goat used to be. Not every region of Pakistan is culturally attuned to beef, which remains the more economical choice. Our urban areas do not provide a good enough infrastructure to dispose off waste after slaughter, so there is a lot of blood and filth lying around post-sacrifice. There are not enough good affordable qasaais (butchers) going around. The qurbani ka gosht (sacrificial meat) smells. Why kill innocent animals? The list goes on.

Yet, there are reasons why this ritual is actually one of the best things one can do, not just as a practicing Muslim but also as a socially aware person and a responsible citizen.

The animals that we buy are actually livelihood of thousands of families across Pakistan. The people of Tharparkar, for example, may not eat meat due to their religious beliefs, yet their hopes are pinned on to Eidul Azha. For this day, they take care of baby goats and calves all year round and in this sweltering heat, they travel to markets to earn enough to sustain their families.

The whole “why don’t we give the same amount in charity” retort, then falls flat. The meat is charity, and buying the animals also, in turn, helps the underprivileged.

Secondly, if you are not big on meat any more, that too of qurbani ka gosht, chances are that you are one of those who get to eat to their hearts’ desire. You can afford meat when you like and afford to go vegetarian when you like. You can write off a meal costing Rs1,000 as not being up to the mark. But the fact remains that in a country where underprivileged and undernourished people are a plenty, this Eid’s meat promises them a time of celebration.

It is best, however, to be accommodating enough and keep the meat portions in your freezer till deserving people are ready to take it and enjoy it. Interestingly, a majority of those who are against this ritual on grounds of being animal rights’ activists have not yet turned vegetarians or vegans. Contradiction much?

As each family member in urban Pakistan gets more pre-occupied in pursuing their own goals, there are few activities remaining that make families bond. The sacrificial animals can provide an excellent opportunity to each family member to bond over a common interest, starting from the children who feed and walk the goats and sheep.

Flexibility in this religious ritual makes it more practical. It is not a must to do it at home, and money can be given to credible organisations. Nonetheless, the days leading up to the sacrifice, if spent looking for and looking after the animals, can give us the real feel of this Eid by sharing our blessings with the needy, with relatives and friends.