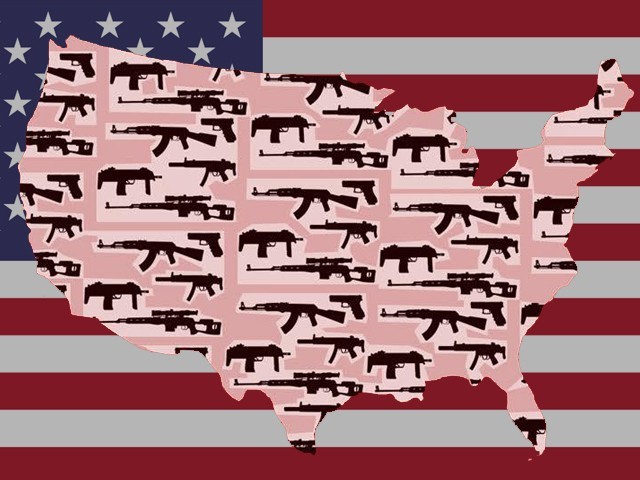 If the availability and presence of guns has to be controlled in the US, the change has to come from the lawmakers.

Given the frequency at which mass shootings take place in the United States (US), one might think that it is a normal phenomenon. But there is nothing normal about a person opening fire in a crowded location. If there is ever a scenario that most closely resembles judgement day, this is probably it, evidenced by the gut-wrenching videos of these shootings that emerge online. Such incidents wreak havoc on a nation’s psyche, making individuals fearful of going to public places, including schools, malls and places of worship.

This past week saw two shooting incidents, yet again, in the US. A shooter in El Paso, Texas targeted shoppers at a Walmart while another shooter shot at people in the entertainment district of Dayton, Ohio. A total of 31 people were killed over the weekend in two geographically disparate and unconnected shootings. However, what does link the two shootings is that both shooters appear to be right-wing extremist. The El Paso shooter wrote a document espousing the doctrines of white supremacy while the Dayton shooter was reportedly obsessed with gun violence and mass shootings as per his social media accounts. These shootings bring the number of mass shootings in America in just this year alone to 292.

The question that needs to be asked, once again, is why does this happen? The United States is a bastion of stability and a giant free market economy where anyone and everyone can make money and live a happy life. Then why are mass shootings such a common occurrence there? Just last year I wrote about a mass shooting at a high school in Florida, and it appears that we are still grappling with the same questions.

According to reports, the shooting in El Paso was motivated by an anti-immigration agenda while the shooter in Dayton wanted to carry out an anti-police act. In Charlottesville, it was white supremacy. At the end of the day though, regardless of motivation, the issue boils down to gun ownership and gun control laws. While the thinking that motivates these shooters is a larger national question for the people of America, surely they must recognise that curbing access to guns will reduce the number of these tragedies. There may be no immediate solution to fixing the mindset that causes such tragedies, but stricter gun control laws will at least help prevent these killings, even if they do not address the root cause of the problem.

According to a research study carried out by the University of Alabama, Americans make up about 4.4% of the world population but own 42% of the world’s guns. Interestingly, only Yemen has a higher occurrence of mass shootings in countries with over 10 million people and Yemen also has the second highest ownership of private guns in the world. Many seem to be adamant that the primary reasons behind these shootings are poor mental health and violent video games. Additionally, despite Donald Trump’s assertions, the study argues that violent video games also have no linkage to mass shootings.

Given the timing of the shootings, right as the Democrats are in the process of selecting a candidate to counter Trump in the elections next year, these shootings have also taken a political twist. Multiple candidates who are vying for the presidential nomination, such as El Paso’s Beto O’Rourke and Cory Booker, have come out lashing against the president, insinuating that he is a racist, a bigot, and that his rhetoric has led to the escalation in these mass shootings, nearly half of which are carried out by white men.

And then there is Senator Mitch McConnell.

McConnell is a long-time Republican senator and supporter of pro-gun laws who has remained vague about implementing any changes to the gun industry. While the reasons could range from ideological to political to personal, the truth of the matter is that if the availability and presence of guns has to be controlled in the US, the change has to come from the lawmakers. It would be too much to ask the common man to simply not buy guns given how predominant the gun culture is in America.

Another, somewhat ironic, side effect of the current mass shootings is that some countries are issuing warnings against travelling to the US because of these mass shootings. After all the years of the US issuing travel warnings to its citizens about not travelling to certain countries, it is strangely poetic that America is now at the receiving end.

Amnesty International today issued a travel warning calling for travelers and visitors to the United States to exercise extreme caution due to rampant gun violence, which has become so prevalent in the US that it amounts to a human rights crisis. https://t.co/bsVsiBOO5K pic.twitter.com/CVWEyVzR3c

If the current trends of gun ownership continue in the US, not much will change. The country will continue to suffer from mass shootings without respite. An aspect of stricter gun laws that must be implemented is that there have to be more comprehensive background checks for those seeking to buy guns and there should also be an active record of those who own guns. This change has to come from the lawmakers themselves. The other aspect is a public effort to educate the masses and actively discourage gun ownership. Controversial as that may be, owning a gun only makes it likelier that the owner may use it. And last, but not least, some sort of vociferous online campaign, similar to #Metoo, might also be helpful, like the one they tried coming up with after the Parkland, Florida shooting called #NeverAgain.

Ultimately, the ugly reality is that Americans want their guns irrespective of all the death and destruction they may cause. Until a concentrated multi-pronged social and political effort is made to change gun ownership and usage laws, the shootings in El Paso and Dayton will just become two incidents on a long list of mass shootings in the US.