30 mass shootings, 18 school shootings in 2018 alone – courtesy of the NRA and its puppet, Donald Trump 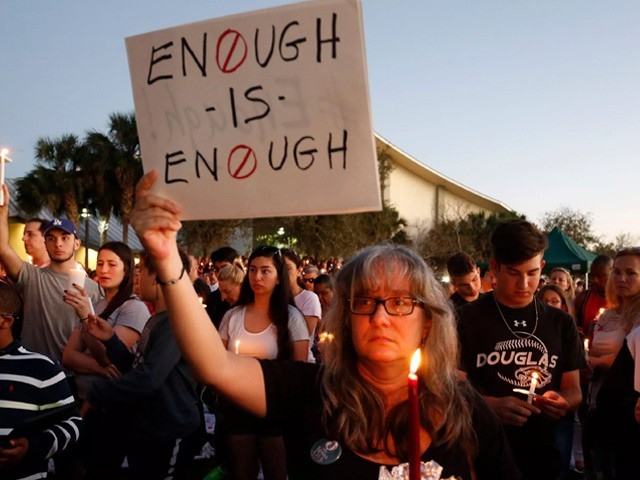 Mourners stand during a candlelight vigil for the victims of Marjory Stoneman Douglas High School shooting in Parkland, Florida on February 15, 2018. PHOTO: AFP

The recent school shooting in Parkland, Florida in the United States brought forth another round of debates and blames. The parents blamed the school for not taking pre-emptive actions towards a student that showed signs of violence. The school blamed the local law enforcement agencies for not doing enough to provide security and not following up on the tip they received. The local law enforcement agencies complained of having their hands tied up due to federal policies.

Collectively though, the community as a whole came together to blame the National Rifle Association (NRA) for pushing lax gun regulations.

It is frightening that the most developed country in the world has been the victim of 30 mass shootings since the year began. And with the Florida shooting, the count for school shootings alone is now 18.

In all honesty, there is blame to be spread all around. The school authorities had identified the student Nikolas Cruz as a risk and had expelled him over behavioural concerns. This being the United States, there is ample law and order on the streets and local authorities have enough visibility in their residents to make informed decisions. The federal government also holds some responsibility given that they implemented lax gun control allowing almost anybody to own and operate a gun.

In most of these shooting cases, be it Florida, Texas or Las Vegas, the blame usually falls on the gun lobby in the US. This lobby is mostly funded by the NRA. It has about five million members and is one of the largest contributors to the American electoral candidates. That is just a small fraction of the overall American population but its members are passionate, vocal and lobby hard for their cause, namely gun ownership, and are not afraid to put their money where their mouth is.

Digging deeper into the politics of the NRA, the organisation spent over $30 million in favour of Donald Trump against Hillary Clinton during his presidential election campaign in 2016. They have spent more than $135 million in the prior two decades on lobbying on gun ownership rights through campaign contributions and promoting studies that minimise the impact of gun ownership. In the same period, gun advocacy groups only managed to spend $19 million dollars. What’s even more disturbing is that the shooting could also be attributed directly to the removal of Barack Obama-initiated gun regulation by Trump that made it easier for people with mental illness to buy guns. The Trump budget has also suggested the cancellation of $12 million that is used to maintain a background database of gun buyers.

Historically, countries that have implemented stricter gun laws have seen a decrease in mass shootings. Australia hasn’t had mass gun shootings since 1996 when they decided to enforce stricter laws following a deadly shooting. Similarly, some European countries have a high ratio of citizens carrying arms but that involves a strict background check including mechanisms to catch possible assailants through behavioural cues.

Any time such an attack happens in the US, there is the usual blame thrown about at the end of which nothing significant really happens. Case in point, after every mass shooting, the government sweeps gun debate under the rug and proclaims that ‘now is not the time to talk about such shootings’. And this time around, they might have crossed the limit.

In return for all the funding given by the NRA, the lawmakers constantly go to bat for the NRA. The governor of the American state of Kentucky dismissed any talk of gun laws and blamed the violence propagated in music and video games as being responsible for such incidents. Trump tweeted his belief that the shooting occurred due to mental problems while completing skipping any blame attributed to the fact that the shooter was able to obtain a gun.

So many signs that the Florida shooter was mentally disturbed, even expelled from school for bad and erratic behavior. Neighbors and classmates knew he was a big problem. Must always report such instances to authorities, again and again!

From a layman’s vantage point, the way to counter the current pro-gun narrative in the US requires an equal or more powerful anti-gun narrative. Take for example the recent #MeToo movement. It’s come to a point where it has become almost too powerful. The mere whiff of harassment, real or imagined, is enough to bring down entire careers. The anti-gun protestors need to come up with a catchy tag line of their own and start a movement that will pressure the government to finally take a stand.

The other thing that would benefit them is if lax gun laws bring down a politician or celebrity. That may give them the jet fuel they need to achieve their goals. The common American loves his guns and will vote for any perceived champion of his rights. Most of the pro-gun narrative coming to the fore holds the argument that if ‘American law doesn’t ban cars when they get into accidents, why ban guns?’

Parkland, FL prided itself on its ‘country elegance’. Awash in bike trails, gated communities and serenity, it has been hit where it hurts. It is a community that is aching and is vowing to upend the status quo on gun violence. It is a community that has responded to the crisis with more than just proclamations of ‘thoughts and prayers’. They have taken to the streets and are utilising social media as a weapon to raise awareness. They are organising demonstrations in various cities in the US including a march in Washington DC to highlight the perils of lax gun ownership laws. This comes in the wake of major metropolitan rallies being held in Florida demanding gun law changes with students, teachers and parents holding placards against elected officials.

With the unfortunate advent of the 24-hour news cycle, there is always the danger of voices being drowned out in the cacophony of global news events. It will take determination and resilience to keep their message alive and on point. Otherwise, communities in the US will remain a ticking time bomb before the next mass shooting takes place.