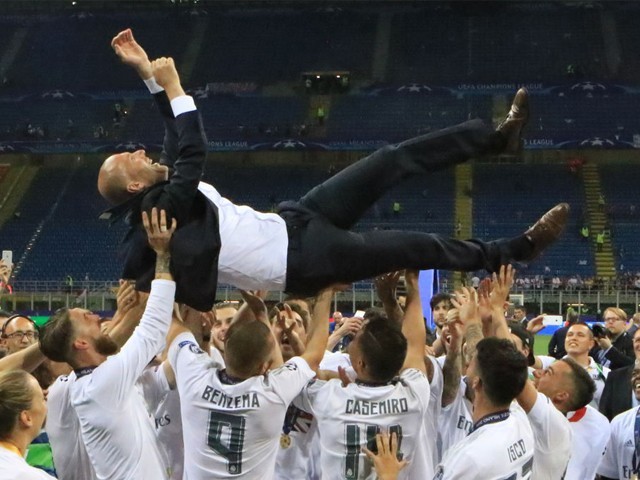 When Real Madrid come knocking, few can say no. Even when you’re a manager who walked away only nine months ago from the club you love because “something needed to change”. 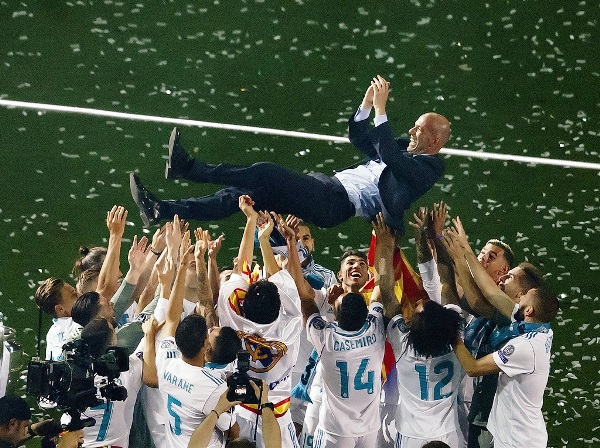 Head coach Zinedine Zidane of Real Madrid is thrown in the air by his players during celebrations at the Santiago Bernabeu stadium following their victory last night in Kiev in the UEFA Champions League final, on May 27, 2018 in Madrid, Spain. Photo: Getty

Zinedine Zidane is back at Real Madrid, the club where he won nine trophies during his previous three-year stint. The love Zizou has for Real Madrid is apparent. The Frenchman cemented quite the legacy during his 2015 to 2018 reign at the club, and only true love (or madness) would tell him to put it on the line to return to the club that is far from the three-time Champions League winners he left them as.

The gulf in class between the team Zidane inherited when he took over in 2015 and the one he takes over now is apparent. He inherited a team with world-class players in their prime. The team was tailor-made for Europe, but it was also a team full of players who knew their worth. Back then, his job revolved more around man-management than anything else. It’s no easy feat to have the likes of outspoken club legends Sergio Ramos, Marcelo and Cristiano Ronaldo to respect you, but Zizou demands respect and this is where the two managers that followed Zizou failed.

However, the team that Zidane returns to is an aging squad. He also returns to a Ronaldo-less Madrid. The club is bigger than any player; a fact Real Madrid President Florentino Perez was very vocal about when the Portugese left the Spanish club for a new challenge with Juventus. While no one will disagree replacing Ronaldo is an almost impossible feat, the club did not even try to do something about it. Instead they hoped to rely on Gareth Bale to carry the torch forward. It was no secret that last season the French manager did not get along with the Welshman. 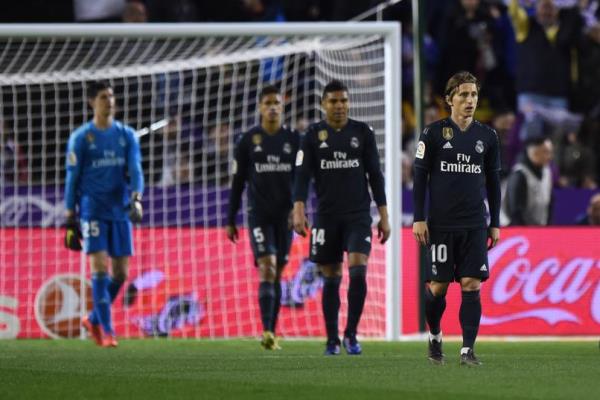 Did Zizou see this coming?

All signs point towards yes.

Even though Real continued winning the Champions League, they seriously fell behind when competing in La Liga, even being surpassed by their city rivals Atletico Madrid in the 2017-18 campaign. After winning three consecutive Champions League trophies, this season the fans would have expected more.

Approaching a transfer window with no say, an aging squad and possibly knowing his star player Ronaldo was going to leave, Zizou bowed out (only the second coach to leave on his own accord under Perez’s second tenure) because more than anyone he knows the expectations and pressure that comes with one of the biggest coaching jobs in world football.

Zidane may have to sign Hazard, Neymar AND Mbappe to fill the Ronaldo void at Real Madrid. It’s clear Ronaldo was about 51% of that club.

Zizou returns at a time when Real have performed the worst they have in years. In a span of seven days, Real lost three games at the Bernabeu, which effectively ended their chance at three different trophies. This also made it four consecutive home losses for Real Madrid, something that hasn’t happened since 2004. The fortress needs rebuilding, and while the rest of the season is free from expectations (except qualification for the Champions League next year), the Frenchman is being considered a saviour who will save Real from a darkness the empire isn’t used to. 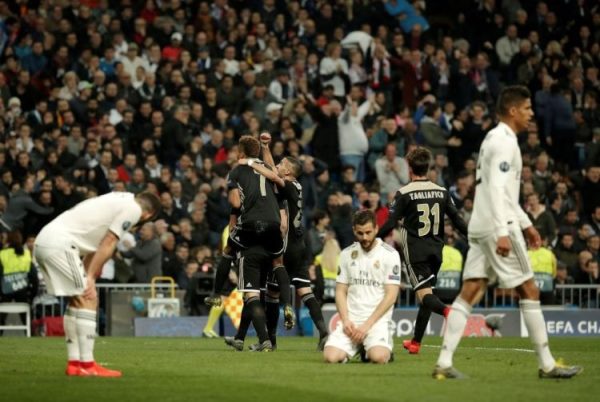 Dusan Tadic (3rd L) of Ajax celebrates with his teammates after scoring a goal during UEFA Champions League Round of 16 second leg match between Real Madrid and Ajax at Santiago Bernabeu Stadium in Madrid, Spain on 5, 2019. Photo: Getty

Is his judgement clouded by the love he has for the Spanish club? Maybe. But the insight of Zidane is such that he knew when to walk away, meaning he also knows when the right time to come back is. He is also the type of coach who knows where the club went wrong, despite the historic hat-trick of the Champions League trophies they achieved under him.

“I don’t forget what we won but neither do I forget the bad things,” Zidane said at the press conference which announced his comeback.

“Last season, we won the Champions League. But we had a tough time in the Copa and in La Liga. I did a lot of things wrong.”

“It has been difficult from outside looking in. I am looking forward to working with the players again, to competing again. I’m just happy to come back. I want to work and to provide what’s needed to get the club to where it should be,” he continued. 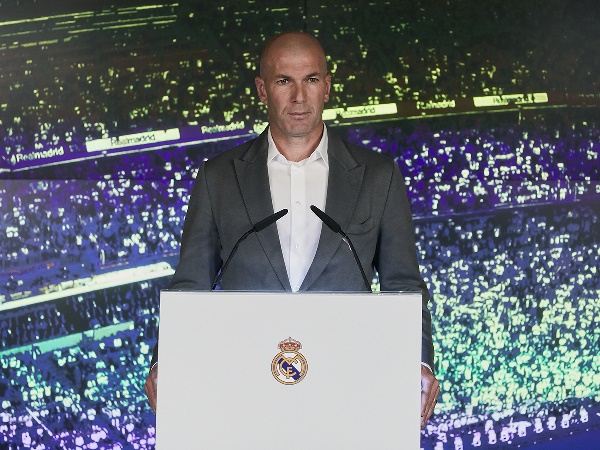 Zinedine Zidane during the press conference of the official presentation as the new Manager of Real Madrid at Santiago Bernabeu Stadium in Madrid. Photo: Getty

No doubt, Zizou has demanded money and autonomy when it comes to the upcoming transfer window. The Independent has already reported that the Real Madrid President Perez “has promised returning manager Zidane £300 million to spend this summer, with the Spanish giants interested in a number of players including Chelsea forward Eden Hazard, 28, and Tottenham midfielder Christian Eriksen, 27.” 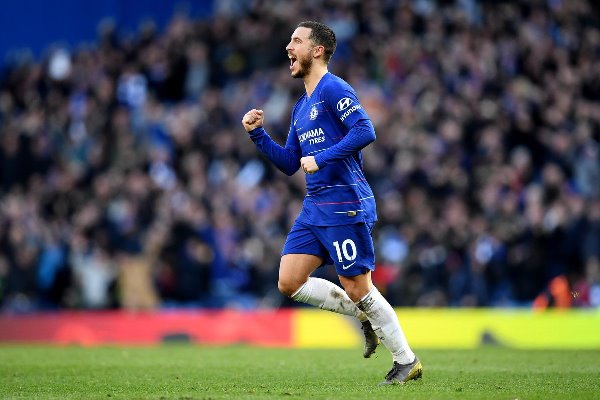 Eden Hazard of Chelsea celebrates after scoring his team’s first goal during the Premier League match between Chelsea FC and Wolverhampton Wanderers at Stamford Bridge on March 10, 2019 in London, United Kingdom. Photo: Getty

A vastly different set-up, Zidane’s second coming will not be based on man-management, but his ability to rebuild the squad. Real Madrid, despite the recent crisis, is still one of the biggest, if not the biggest club in football. Zidane is the man that led Real to three consecutive Champions League titles; there are a few players that would deny a move to the Spanish capital.

There are also certain players who will no doubt be relishing the return of Zizou, especially Isco. While the Spanish player faced a patchy time under the Frenchman, it was Santiago Solari who froze him out completely. Isco, however, is young and talented. He has no shortage of suitors looking to lure him away from the Bernabeu. With the likes of Pep Guardiola being a long-term admirer of the Spaniard since his Malaga days, Zidane will be keen to keep him around as he looks to build for the future. In Marcos Llorente and Dani Ceballos, Zizou could easily have the successors to his midfield of Toni Kroos and Luka Modric. And while only 18, Vinicius Jr could be the answer to Real’s goal-scoring woes in a post-Ronaldo world. 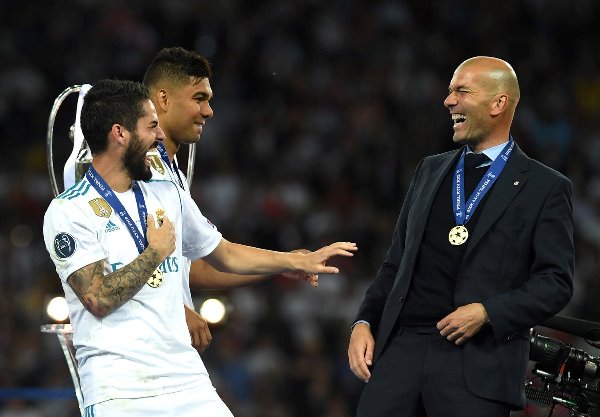 Isco of Real Madrid speaks with Zinedine Zidane, Manager of Real Madrid following their sides victory in the UEFA Champions League Final between Real Madrid and Liverpool at NSC Olimpiyskiy Stadium on May 26, 2018 in Kiev, Ukraine. Photo: Getty

As the news of his return broke out, fans and players alike took a sigh of relief. Zizou is back home, but one mustn’t forget not many last in the Bernabeu hot seat with Perez as president. Zidane’s homecoming is the fairy tale twist that Real Madrid craved but it will only be a matter of time till Zizou proves whether he’s the hero fans claim him to be, or if he’s just another villain.