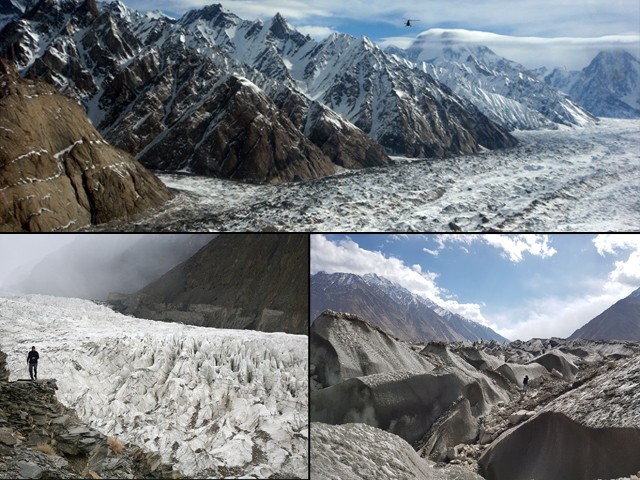 The report revealed that at least a third of the glaciers in Asia’s towering mountains are doomed to melt due to climate change.

Pakistan is fortunate to be home to three great mountain ranges: the Himalayas, the Karakoram and the Hindu Kush. In fact, on the drive up the Karakoram Highway from Islamabad to Gilgit, I often stop at a place near Jaglote town where these three ranges actually meet. One can see the grand vista from the road, which could easily be missed if not for a sign nearby which reads,

“The junction point of the three mightiest mountain ranges of the world.”

The Karakoram includes the K2, the world’s second-highest peak, and is the most heavily glaciated area on the planet apart from the polar regions. The massive glaciers of Baltoro and Biafo (both in Pakistan) that together stretch for hundreds of kilometres in the Karakoram can also be seen from the International Space Station.

Due to its altitude and ruggedness, the Karakoram is much less inhabited than the Himalayas further east, and little research has been done on this range in comparison to the Alps or the Andes, according to all the researchers I have met over the years. However, this past week, a ground-breaking new study done by the International Centre for Integrated Mountain Development (ICIMOD) has shed light on the climate change threats faced by the ranges that make up the Hindu Kush Himalaya (HKH) region.

The first assessment report of the HKH region, which includes high mountains in Afghanistan, Bhutan, China, India, Myanmar, Nepal and Pakistan, has taken years to prepare. Launched recently, it immediately created waves as the report revealed that at least a third of the glaciers in Asia’s towering mountains are doomed to melt due to climate change, with serious consequences for the approximately two billion people who live below and nearby. 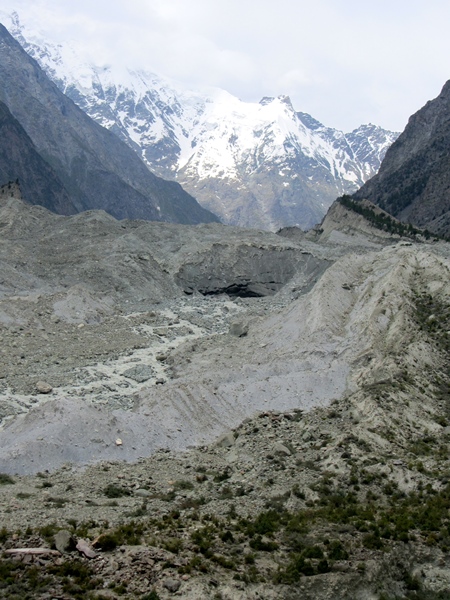 There has been a rising trend of extreme warm events in the HKH over the past five to six decades, alongside a falling trend of extreme cold events. Now, even if we somehow manage to limit global warming to 1.5 degrees Celsius, 36% of the glaciers in the HKH ranges will be gone by 2100. If emissions are not cut, the loss is even higher – two thirds of the glaciers will be lost forever. In case it is still not clear: this will destabilise Asia’s rivers.

A diverse group of more than 350 leading researchers, practitioners and policy specialists working in the region have come together to develop this comprehensive assessment of the HKH. Other than climate change, the report also deals with biodiversity, air pollution, disaster and resilience, poverty, gender and migration.

The key findings offer alarming news for Pakistan, a state completely dependent on the Indus River, which acts as a glacier-fed lifeline for a country of over 200 million people. 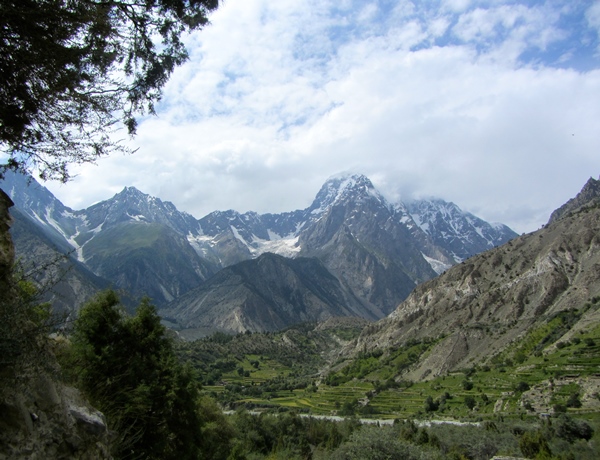 The consensus is that despite the overall loss in ice, no significant mass gains or losses have occurred in the Karakoram region in this early part of the 21st century. The Karakoram Anomaly was first observed by Canadian glaciologist Kenneth Hewitt in 2005. He had been conducting expeditions to the K2 Base Camp for several years to measure large glaciers like Baltoro, and told me several years ago,

“Nowhere in the upper Indus Basin do you have the collapse of glaciers like in the Alps. They are actually holding their own or growing.” 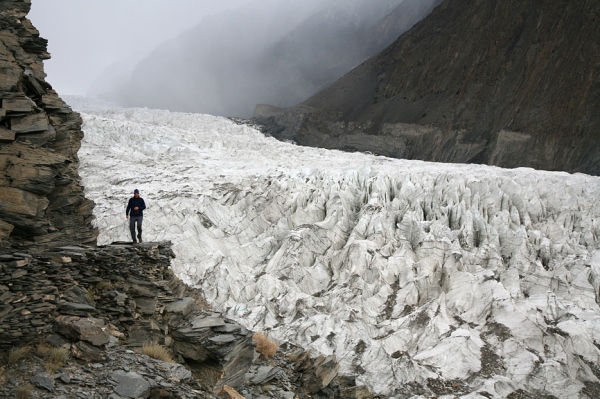 So what does this latest ICIMOD report, which reduces scientific uncertainty on various mountain issues, have to say about the Karakoram in particular? Well, the chapter on climate change in the HKH reports,

“The HKH is experiencing increasing variability in western disturbances and a higher probability of snowfall in the Karakoram and western Himalaya, changes that will likely contribute to increases in glacier mass in those areas.” 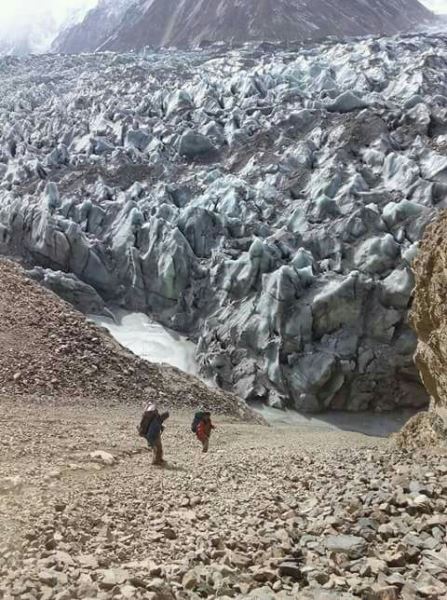 The report then goes on to note that glaciers in the region have thinned, retreated and lost mass across the HKH region since the 70s, except for parts of the Karakoram, eastern Pamir and western Kunlun.

“These trends are projected to continue, with possibly large consequences for the timing and magnitude of glacier melt runoff and glacier lake expansion.”

It is certain that smaller glaciers are melting in the mountains of Chitral and Gilgit-Baltistan, and residents have also been victims to periodic glacial lake floods in recent years. The ones that are growing, however, are located in elevations higher and colder than many other glacier systems. According to Advisor to the Prime Minister on Climate Change Malik Amin Aslam,

“The large glaciers in the Karakoram Mountain Range, which falls mainly in Pakistan, are not behaving like the ones in the other ranges. The Karakoram Anomaly is a fact and some of our glaciers are growing, which may be a blessing for Pakistan. However, the rising temperatures in the region are an area of concern and we need more research on the Karakoram specifically. We also need to take measures to protect ourselves.” 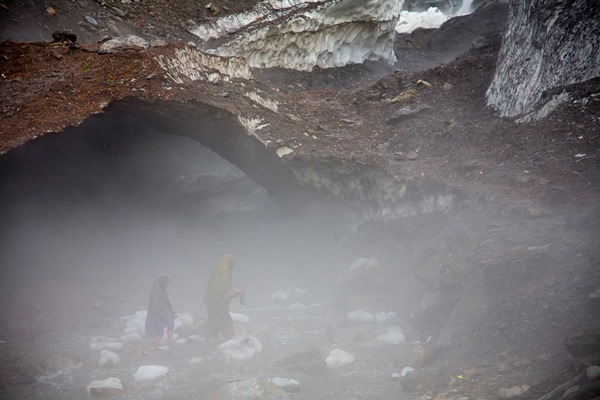 The Federal Ministry of Climate Change will be implementing a $37 million project to scale up glacial lake outburst flood (GLOF) risk reduction in northern Pakistan this coming year. The International Green Climate Fund is giving us the money as a grant.

The existence of the Karakoram Anomaly might be good news for Pakistan, but Philippus Wester from ICIMOD, who spearheaded the report, suggests that while the impact of warming is indeed variable and some glaciers in Afghanistan and Pakistan are stable and a few are even gaining ice, they will nonetheless start to melt in time as the warming gets worse.

The melting glaciers will thus increase river flows around 2050, according to Wester, pushing up the risk of GLOFs. However, in the following decades, river flows will go into decline, affecting the Indus and central Asian rivers the most. 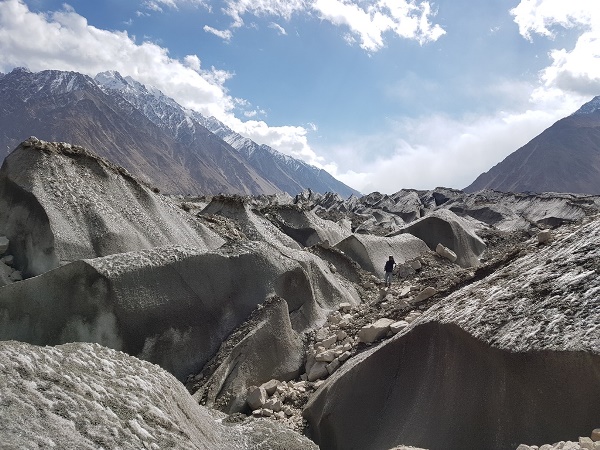 Pakistan’s glaciers provide a vital water source, acting as giant water tanks for us living below in the Indus Basin. However, due to insufficient on-site measurements, few high-elevation weather stations, rugged terrain and the remote location of our largest glaciers, we really don’t know for sure what the future has in store for us.

To really establish the consequence of glacial melt on the region’s local water supply, we need to move beyond satellite data and towards on-ground assessment. Pakistan thus needs more resources to investigate these massive glaciers in order to get a clearer idea of how changes in these vast rivers of ice will impact our already diminishing water supply in the years to come.