How many hurricanes will it take for Donald Trump to realise that climate change is a real threat? 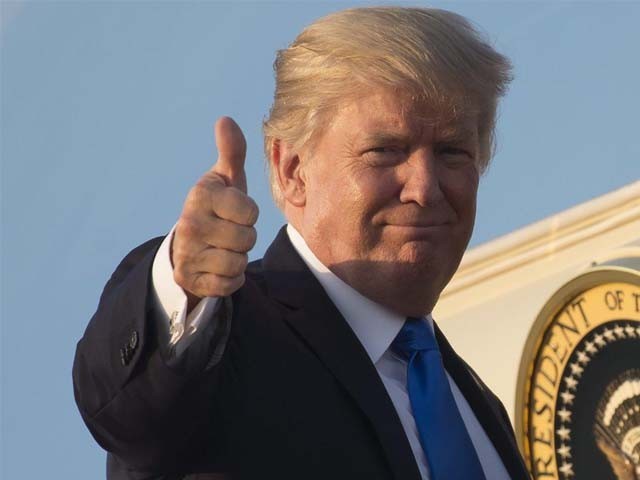 Since the 45th elected president of the United States was announced, the world has been divided into two schools of thought. There are people who support Donald Trump’s ideologies and people who absolutely despise him for the same reason.

When I woke up on election day and checked the news, I was confident that Hillary Clinton had won. Alas, the result was something no one had expected. I, along with the rest of the world, was horrified that the new president was probably the worst choice the US had ever made.

Every time that man gave a speech, it would end up going viral because of all the ridiculous things he said. He has no filter and every time I would hear him speak, I would have a strong urge of giving him a ‘think before you speak’ lecture.

It was difficult for me to accept the result, even though he is not my president, because in reality, it affected all of us in one way or an other.

My friends called me and joked about how they plan on moving to Canada because the US was going to change drastically. My relatives had expressed concern when I mentioned that I wanted to go visit my uncle in the US. Upon telling them I had been there twice already, without facing any issues, they simply replied saying that Trump was not the president then. It will become increasingly difficult to go to the US especially for someone like me – someone who has a green passport and was recognised as a Muslim.

My university professor, who is a citizen of the US, is still afraid to go back because her friends back home are currently facing excessive racist banter on the streets.

Trump has caused a lot of stir amongst people due to his statements, whether be it is his passion to build the wall, him not condemning the Charlottesville attack or countless other racist rants. Add to that Trump’s denial to acknowledge climate change even though, ironically, it has cost him a great deal.

We have been taught the dangers of climate change in school and how we, as responsible individuals, can try to reduce the radical damage it can cause. It is essential for us to do our part in making this world a better place. Going green only helps our future generations and us.

In the midst of our realisation to save the world, Trump denied climate change and termed global warming as a hoax. Yes, you read that right, he thinks global warming is not real. This speaks volumes about him.

Ice storm rolls from Texas to Tennessee – I'm in Los Angeles and it's freezing. Global warming is a total, and very expensive, hoax!

He tweeted that it was a Chinese conspiracy invented to sabotage US manufacturers,

The concept of global warming was created by and for the Chinese in order to make U.S. manufacturing non-competitive.

I was not surprised, because if anyone on this planet was to deny the existence of global warming, it would be Trump with his “alternative facts”. When he made the statement, I found it quite humorous. However, at that point in time, Trump was not the president of one of the most powerful countries. But now he is and it does not seem as funny.

However, Mother Nature did not take well to Trump’s tweets and now he is experiencing how dangerous climate change can actually be.

The US is currently in turmoil due to Hurricane Harvey’s recent wreckage, the damage caused by wildfires in the western states, and now, Hurricane Irma.

Hurricane Harvey was the most devastating storm Texas has faced in over 50 years. The death toll has risen to about 70. Harvey stretched for 300 miles and has displaced more than one million people and destroyed 200,000 homes in its path. The damage done by the hurricane could amount to about $180 billion, according to the governor of Texas.

Trump recently removed the flood protection laws introduced by Barack Obama in 2015, just days before Harvey hit the US. Thus, it made it more difficult to build bridges and roads in areas that were prone to flooding. Furthermore, if infrastructure were to be built in the said areas, the constructors would have to take the impact of climate change into account and build infrastructure that could withstand future climate changes. Naturally, people were not happy about Trump’s decision and took to Twitter to voice their rejection.

With sea levels rising, and climate change becoming a world issue, the audacity of his ignorance is still astonishing. https://t.co/GbKwRzv7ap

Ask yourself this… "Who does this serve? What use is this to anyone?"

.@RepJohnFaso trump is so spiteful, he undoes everything Pres. Obama did, even if it would hurt people, like flood protection. #ny19 https://t.co/QfeZL5BBxV

Trump is out to make sure he reverses every reform or law made by Obama, not realising the repercussions of his decisions.

Simply put, Trump is acting petty and that is not a great trait for the president of a super power to have. In fact, it is not a good trait for a president to have, period. The flood protection law would not have stopped the hurricane, but it would have tremendously assisted in rebuilding. Rachel Cleetus of The Union of Concerned Scientists said that rebuilding Texas without considering this would be a serious mistake.

US western states have been hit with deadly summer wild fires as well. The state of Montana is one of the worst victims of this disaster, where approximately one million acres of land have been burnt to ashes. The reasons for these wild fires are in fact global warming, as temperatures all over the world are rising.

This weekend, Hurricane Irma hit Florida. Its death toll is currently 12 in southern Florida and it is still rising. Moreover, around 6.9 million homes are left without power in Florida.

It is important to observe how Trump’s mind-set and take on certain matters can prove to be so dangerous. When Trump denies climate change, his supporters will follow suit.

When I was visiting my uncle in Arkansas back in 2009, there was a storm warning in his area. My uncle told me that it was common to experience storms and hurricanes in this part of the region and that they were not that bad.

He was right. The thunderstorm that hit Arkansas brought with it a lot of rain and wind, but it was not the kind that would destroy a city. What the US is facing right now is an intense series of hurricanes, one after the other. That is not common and neither is it normal. It is nature knocking at our doors and telling us that we messed up in regards to polluting the earth and now we are being made to face consequences.

Although it is a fact that climate change and global warming do not cause hurricanes and storms, they do add to their intensity and that is exactly why their increasing presence needs to be acknowledged.

The change in climate is apparent in the rest of the world too. Karachi has faced terrible thunderstorms this year and has been facing heat waves for the past few years and it keeps getting worse. Two years ago, Karachi faced a horrible summer where numerous people died of dehydration.

I am curious to know how Trump will explain these sudden changes in the temperature around the world.

Trump’s ignorance regarding climate change has irritated many people over the years and they are finally speaking up against him.

It's almost as if the climate…… changed https://t.co/Hr25eMRoFn

Trump: Climate Change is a hoax

Mother Nature: I AM NOT A HOAX

So..maybe something has changed. Hmmmm what could that be? Let's see. Hurricanes are weather, weather is climate..wait…. https://t.co/hAisRbvRoR

If only we had some sort of sign that climate change was real.

A lot of people, including me, still don’t believe Trump will agree that climate change is real even after Irma.

I asked this poll days ago (speculating about a 2nd hurricane). Do you think that Trump will believe in climate change if Irma hits the US?

Nature is no conspiracy and the increasing risks of high intensity disasters are evidence to our world being subjected to adverse change.

It is high time that the president of the US comes out of his tiny, ignorant shell and faces reality which is screaming out to him – climate change is real and it is taking lives.