By not supporting women trying to enter Sabarimala, the BJP proved their ‘gender justice’ stance is a lie 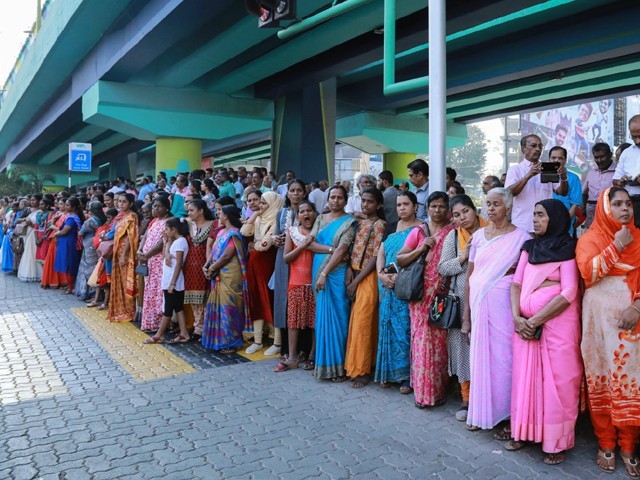 Millions of women joined hands along a highway in Kerala to form a “women’s wall” on New Year’s Day. PHOTO: AFP

Historically speaking, faith has always been a victim of politics. However, the protests that are currently being held regarding the entry of women in the Sabarimala temple in the South Indian state of Kerala don’t particularly have to do with faith; they have more to do with politics.

For centuries, devotees believed that the presiding deity of the ancient temple, Lord Ayyappa, is celibate, and the entry of ‘fertile’ women would violate the Lord’s celibacy. Young women were therefore denied entry into the temple, while only women above the age of 50 could visit.

As far as men are concerned, a specific method needed be followed in order to visit the hilly temple. For 41 days, male devotees maintained celibacy before going to Sabarimala. They followed a very strict vegetarian diet, refrained from drinking alcohol, took a bath twice a day, visited a local temple every day, and also refrained from cutting their hair and nails till the journey to the temple reached its conclusion.

Last September, the Supreme Court in a landmark judgement decided to open the temple for women of all age groups. This opened the Pandora’s box of politics on the issue of faith.

Generally, the verdict of the apex court is enforced without much resistance but for the first time ever, a judicial decision has met a political wall. The ruling party of India, the Bharatiya Janata Party (BJP), is provoking an open defiance of the apex court’s ruling. What does this mean politically?

In a recent interview, Indian Prime Minister Narendra Modi said that Sabarimala is a matter of tradition, implying that there is a limit to which the court can interfere in matters of faith and tradition. Modi made it clear that the BJP will not compromise where it feels that the majority community’s religious belief is being tampered with or not honoured.

This has clear implications. The ruling party is telling the court that it cannot decide the Ayodhya temple verdict in favour of Muslims. The disputed site in the eastern Indian state of Uttar Pradesh, where once stood the Babri Mosque, has to go in favour of Hindus with or without the court’s approval. Religious beliefs are paramount, and the law and justice have to succumb to that.

The BJP is telling the court and the people at large that even the highest court in the country cannot protect minority rights and well-being in India, and religious minorities have to live at the mercy of the Hindu majority.

The party has always flourished by widening the societal and religious fault lines in the country. The right-wing Hindu group thinks that the Sabarimala temple is a fault line in the state of Kerala, where it now struggles to stand on its feet politically.

In the 80s and 90s, the party ignited the ‘Ram Temple issue’ to polarise society and widen its political base, and succeeded in doing so. The temple movement led to the demolition of the 16th century Babri Mosque by Hindu fanatics. The BJP exploited the popular belief that the Hindu god Ram was born at the site where the mosque had been constructed, and the party legitimised its sheer communal agenda in the popular consciousness.

A similar campaign is now afoot. The only difference is that the enemy this time is the Supreme Court and not the Muslim community.

The party is creating an obstruction for any woman who wants to enter the temple. However, with the support of the leftist government in Kerala, three women have thus far managed to enter the main temple complex.

In protest, the BJP and its affiliates organised a violent shutdown for two days in Kerala that also cost some human lives. The BJP believes it will be able to polarise society in Kerala, thereby creating a political space for itself in a state known for its high literacy rate. This is a dangerous trend,a nd offers a challenge for an independent, progressive judiciary and the growth of a healthy, vibrant democracy in India.

This is one more attempt by the Modi-led government to turn India into the den of a Hindu majoritarian state. The BJP thinks that it can tinker with the personal laws of the Muslim community but no one can touch the belief system of the Hindu community. In the case of the ‘triple talaq’ bill for example, the party is making divorce a criminal offence in order to punish Muslim men. This is a direct attack on Muslim personal law in the name of ‘gender justice’.

But this same ‘gender justice’ argument doesn’t seem to hold much ground for the BJP as far as the entry for women in the Sabarimala Temple complex is concerned. Millions of women formed a chain in Kerala last week in solidarity with the court’s verdict. The BJP calls it a ‘political ploy’ by the communist government of Kerala.

Phenomenal! Never seen such a display of women power.

Down Down Patriarchy and Communalism #WomensWall pic.twitter.com/FtY4o45Chc

This double standard has become India’s political culture today. The political bar is set so low by the ruling party today that other political groups such as Congress, in order to not lose electoral base, are compelled to follow it.

India’s first prime minister, Jawaharlal Nehru, promoted scientific temper and fought against established religious obscurantism and prejudice. He always emphasised the need to make India a modern and secular democracy. Seventy years down the line, Modi sits on the chair where Nehru once presided, wearing the jacket Nehru used to don, but he is blind to modernity and secularism.

The Sabarimala Temple entry issue is not only about religious faith, it is also about faith in democracy, multi-culturism, secularism and a progressive India, which is increasingly fading away.