India has spoken: The beginning of Modi’s end 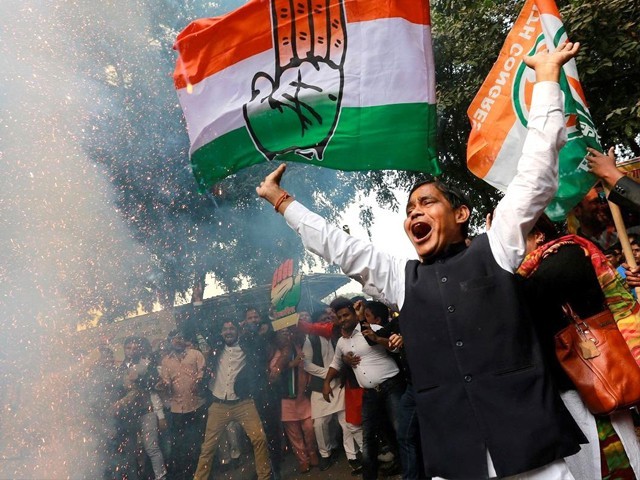 On Tuesday, India made a new tryst with democracy by defeating the Bharatiya Janata Party (BJP) in the three heartland states. The margin of the Congress party’s victory might be narrow but the magnitude of the BJP defeat goes beyond regional elections.

We accept the people’s mandate with humility.

I thank the people of Chhattisgarh, Madhya Pradesh and Rajasthan for giving us the opportunity to serve these states. The BJP Governments in these states worked tirelessly for the welfare of the people.

Never before has an electoral result given such relief to the masses who have been living under siege ever since the BJP, under the leadership of Prime Minister Narendra Modi, assumed office in 2014. Madhya Pradesh, Rajasthan and Chhattisgarh, which together make up the Hindi heartland, weren’t the only things at stake in these assembly elections; India’s soul was as much on the line.

With civil society being pushed to the margin, institutions of democracy under constant attack, minorities feeling completely humiliated and marginalised, liberals and seculars branded as anti-state and prominent public universities being turned into centres of Hindu majoritarianism, Modi’s government was making India an unrecognisable place for its own citizens.

The brazenness with which the BJP started treating its own people was appalling to say the least; manipulating media to propagate manufactured narratives, invading people’s privacy and suppressing political dissent, Modi turned against the very people who brought him in power in the first place.

Hence, given the current political situation of the country, the assembly election results are a landmark outcome. The aura of invincibility that Modi had acquired over the years stands diminished. People have sent a message to the Indian prime minister that he needs to renounce his conceit and stop acting like God.

Never before in independent India’s history has a prime minister refused to talk to his own people and maintained silence on issues that seriously impact the country. Be it the killing of innocent Muslims for eating beef, the murder of a prominent journalist by a radical group or demonetisation and other harsh economic measures, Modi chose to remain silent throughout.

A prime minister hired to further the agenda of development has instead been turning the nation into a laboratory catering to his majoritarian project. Development has in fact become a subset of this ideological agenda. Instead of development, it is division and hostility that has been flourishing in India since 2014.

The recent verdict is therefore a warning signal and a strong disapproval of this brand of politics. The victory of the Congress party establishes the balance of power in the Indian polity. Prior to the Tuesday elections, Congress had been suffering defeat after defeat since 2014. The weakening of Congress was emboldening right-wing political parties and giving them political space that was too intrusive for a secular and multi-cultural republic.

The party leader Rahul Gandhi acquired a whole new aura after delivering three states to the Congress. Ridiculed and maligned by the BJP for very long, the young Gandhi will directly challenge Modi in the General Elections to be held in 2019. This victory comes exactly a year after he assumed office as the party president.

The rejuvenation of the Congress party is a revival of hope in liberal and secular India. The verdict is a reassertion of people’s faith in democracy and the political middle path. People have spoken loud and clear that they want change. It is now the responsibility of secular political parties to come together and create an alternative strong enough to defeat the BJP government.

The BJP government today has a lot of money and takes its campaigning to a whole new level altogether. Winning an election against an opponent with strong corporate backing, very formidable media support and solid backing of state machinery will not be easy. We can only hope that a secular alliance under the leadership of the Congress will be a strong contender for the throne of New Delhi in 2019.

These election results also serve as a lesson for the media. It is important that the media stops serving as a mouthpiece for Modi’s sectarian ideology and divisive agenda. To this end, it is important that the opposition’s voice be heard too. People have voted to claim their own India. They don’t want revolution or radical change; they want their own democratic space.