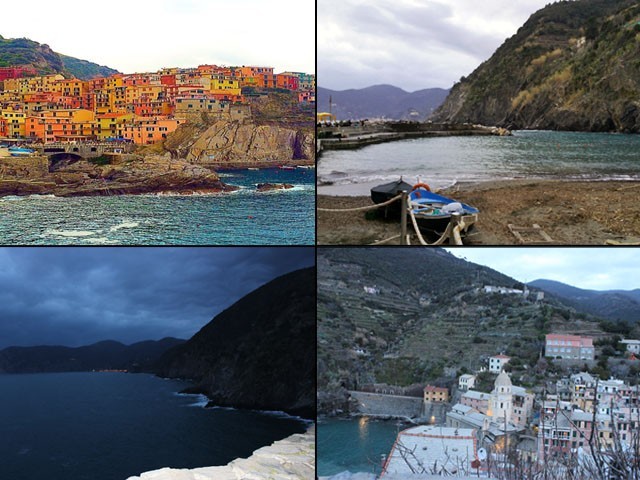 The thrilling splendor of Cinque Terre was excellently complimented by the hospitality of the Italian people. PHOTO: RAHILA ASFA

I suppose I should begin with a disclaimer: I have never been a ‘sea person’. My husband on the other hand, being a ‘child of the coast’, mocked me for my aversion towards oceans and beaches. Sometimes, however, destiny has a different plan for us than the one we expect. So one fine morning, we decided to drive, and drive we did! 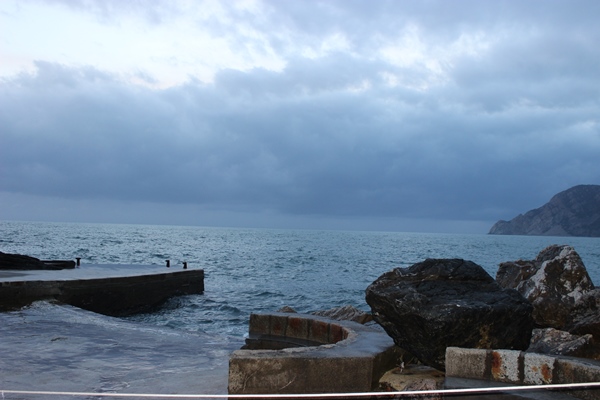 Starting all the way from Brussels to breathtaking Interlaken in Switzerland, then Como in Italy and finally heading towards the five enchanting villages of the Italian Riviera, known collectively as Cinque Terre (Five Lands). Cinque Terre comprises of five villages: Riomaggiore, Manarola, Corniglia, Vernazza and Monterosso al Mare. If you also claim to hate the sea (like me), make sure to visit this amazing part of the Italian Riveria and I assure you, you too will start loving every bit of the ocean!

Our drive from Como to La Spezia took us nearly three hours and we reached Graveglia late evening. After a long discussion with my better half while driving, we decided to stay in the northern rural outskirt of La Spezia, near Graveglia. Here we stayed at the Luna Rossa, a suburban home converted into a hotel, which proved to be exactly what we were looking for. It was a simple, lovely little place with complimentary breakfast and even a car park. As I opened the balcony window of our room, I saw a refreshing view of the far off mountains in the Liguria region. While gazing out at the mountains, I couldn’t help but think of the unique beauty of the hilly northern areas of Pakistan which are no match for anywhere in the world, not even in Italy. 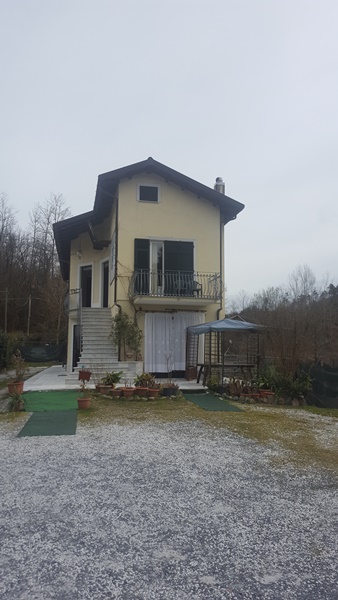 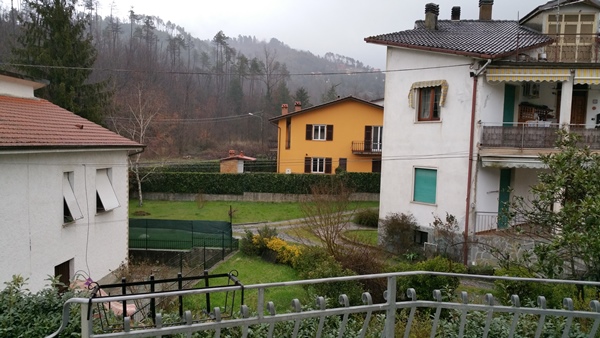 View from the hotel balcony

If you are planning to drive into Cinque Terre like we did, make sure you’re careful because the hilly roads are defined by never ending twists and turns. It was not easy for us to drive to Cinque Terre particularly because we were driving a massive American Ford Taurus, not in the least suitable for European roads. This was basically why we decided to stay at Luna Rossa, instead of driving ahead.

The next morning, after having delicious traditional Italian breakfast with cheese and freshly ground coffee served by the lovely hostess Erika, we decided to spend the day at Vernazza. Erika, the owner of the hotel, played the role of a delightful tour guide and explained to us the best way to go about exploring the picturesque Cinque Terre. She highly recommended that we reach Cinque Terre via train, and I’m extremely glad we took her advice because what we saw next was one the most charming railway stretches I have ever seen in the world! Eventually, we left to explore the bright and beautiful village of Vernazza. But first let me describe in detail,the breathtaking train ride from La Spezia to Vernazza. 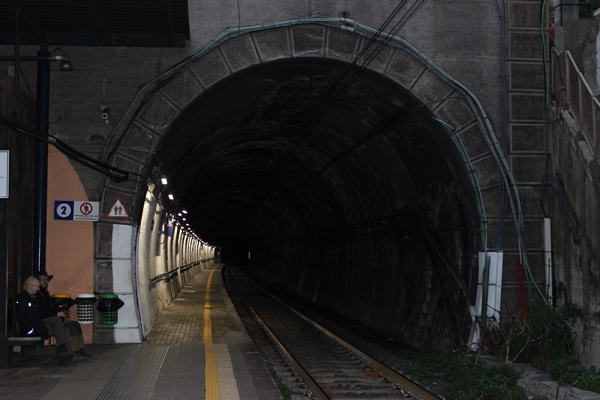 The train station at Vernazza

The 19th century train tunnel from La Spezia to the five villages is guaranteed to blow your mind. The spectacular railway stretching with enchanting views of the Ligurian Riviera on one side and the mountains on the other gave me literal goose bumps. I got up from my seat with excitement when the train stopped at the small station gallery of Manarola. The captivating views of the ocean and the dramatic cliff side stations will make you shriek with amazement (as I did), the first time you see them.

With particular characteristics and history of its own, each village in Cinque Terre has its own unique charm to explore. Despite certain similar features such as terraced vineyards and pathways along the sea common to all villages, one can easily distinguish one village from the other, keeping in mind their striking dissimilarities. 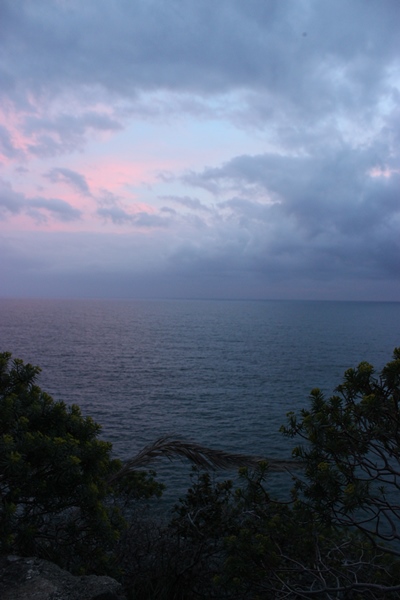 the villages of Cinque Terra

Having decided to spend our day in Vernazza, we reached our destination after just 15 minutes of incredible train travel. We had many reasons for choosing to visit Vernazza before all other villages. Vernazza is known as the ‘Pearl of Cinque Terre’ and was the only village with a natural harbor for ships in the past. The village was also historically the most prosperous economic and political hub among the five.

In addition, Vernazza is home to Doria Castello (The Doria Castle) with a cylindrical tower known as the ‘Belforte’ which gave us an opportunity to enjoy the magnificent scenic beauty of the Ligurian Riviera on the one hand and the colorful harbor on the other. While walking through the narrow stairways to reach the top of the tower, we saw absolutely glorious views of the evening sky. The sky was a bit dark in the evening and the turquoise seashores turned white as the sun went down.

Vernazza also had no long sandy beaches unlike other central European coastal lines. Instead, there were natural small bays and beaches surrounded by mountains. 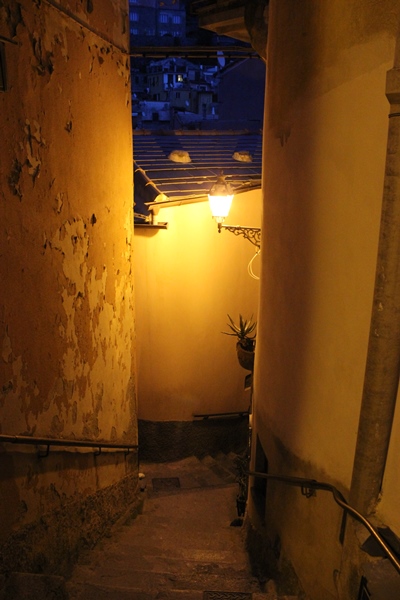 The narrow staircase leading up to the tower 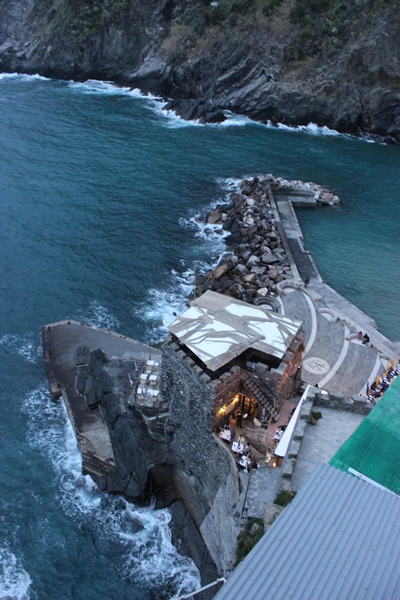 Cinque Terra as seen from the tower 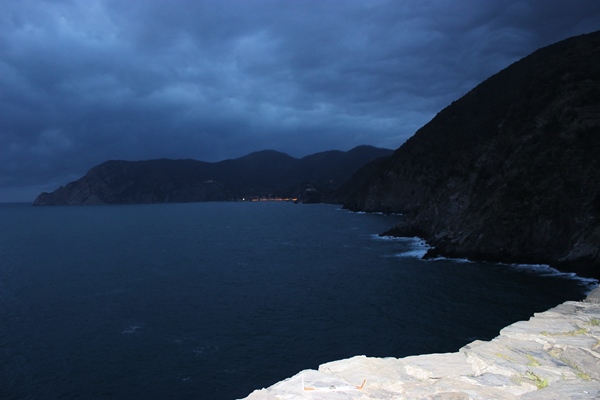 The dark sky as seen from the tower

We spent most of our day until lunch time at the main street of the village known as Piazza Marconi. This was the center of the village and there were a number of bars and restaurants here catering to tourists. The most interesting piece of information that we learnt was that this was the only place in central Europe where majority of tourists were American. 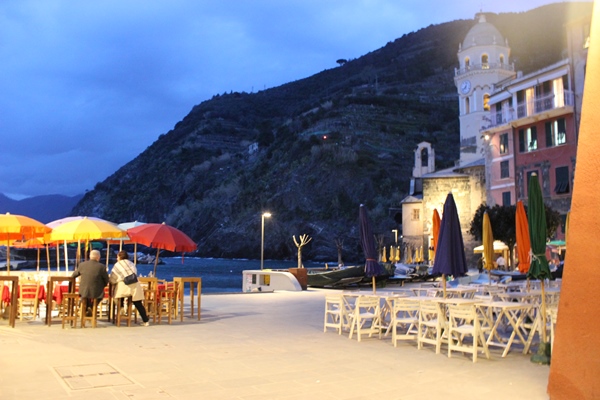 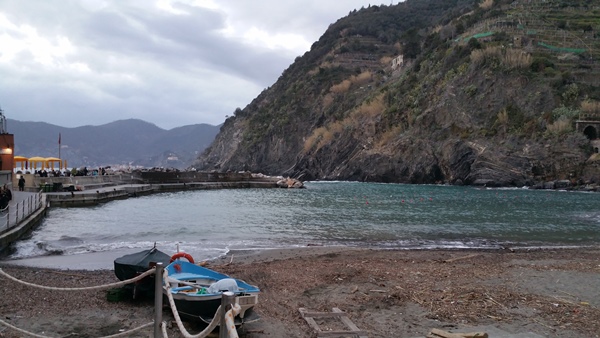 The coast of Vernazza

The villages of Cinque Terre have something for everyone. If you too are lazy like my husband, you can just relax at any of the tiny beaches of any village to “soothe your soul” as he puts it or ride a “wine train” up to see the petite vineyards that are no less exquisite than the enormous vineyards of Bordeaux in France. If, however, you’re an adventure-lover, you will certainly appreciate the opportunity to cliff dive in the deep waters of Italy. 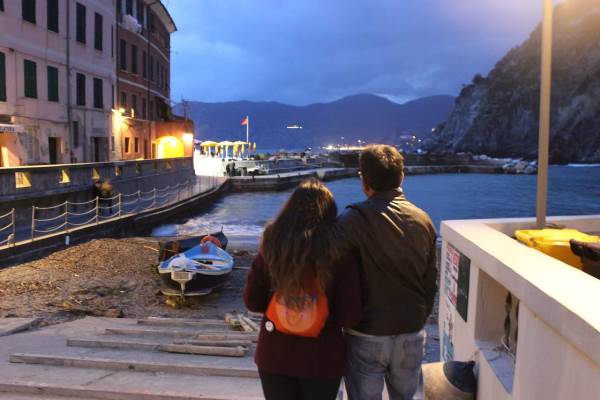 Me and my husband at the coast of Venazza

All in all, it was a long, crazy trip, with the highlight being these tiny, beautiful villages of Italy. The thrilling splendor of Cinque Terre was excellently complimented by the hospitality of the Italian people who welcome you with open arms and make you feel like you really and truly belong. Ciao!

The author is a lecturer by profession and teaches IR and Political Science at the GC University, Faisalabad.