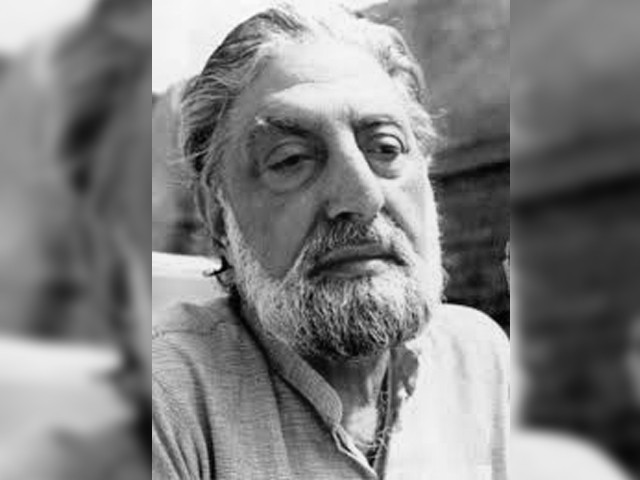 There is no shortage of topics in his work; one is amazed at the sheer expanse of his poetic range. PHOTO: TWITTER/ RANA MOMAND

Qalandar Momand (1930-2003), whose 88th birthday fell yesterday, is regarded as an epoch-making and trend-setting personality in Pashto literature, journalism and politics in the 20th century. The most gifted of a generation that also includes contemporaries like Ajmal Khattak and Khatir Ghaznavi, Momand made his mark as an enlightened scholar, progressive writer, political thinker, social thinker, scientist, researcher and historian.

It was thus rather unfortunate that Google chose to commemorate the late Urdu playwright Fatima Surayya Bajia – also born on September 1st  88 years ago –  with a Google Doodle, and not Momand; though the latter’s diverse contributions far outstrip the former, who was mostly associated with television.

For his ideological struggle, intellectual position and practical sacrifices, Momand is indeed the equivalent of Faiz Ahmad Faiz. He was tortured in the Lahore Fort’s infamous torture chamber during Ayub Khan’s dictatorship in the 60s, and he also belonged to the Ahmadi community. Perhaps it is for this reason that Google and other platforms have never come to his rescue!

On the occasion of his 88th birthday, I have chosen to translate three of his poems from his masterpiece Sabaun (Morning Time), where Momand simultaneously travels from the tress of the beloved to the sorrow of the present. At one place he is wallowing for the beloved of his country, at another he resides in the Vietnam of Ho Chi Minh. He bemoans his separation from departed friends, and then mourns the impoverishment of the workers of the world. There is no shortage of topics in his work; one is amazed at the sheer expanse of his poetic range.

But the heart is as sad as before.

How can I ever call it a season of flowers?

The autumn laid waste to my orchard,

There is sorrow upon sorrow now, but where is happiness?

The home is in mourning now,

I appear to be hale and hearty,

But am fragmented from within.

What appears to be that redness,

Is actually my deprivation.

(It’s not spring yet)

With blood and work, my life is rife,

I am the vermilion of the bride of life.

Actually, I am a strong tree,

Giving the message of death to the wealthy.

I am that messenger, task-worthy,

I am the redness of the universe’s face,

And the light of time’s eye, too.

The son of fire, of worker’s weal.

I am a song of the instrument of peace,

And remembered in the revolution.

I am that beautiful mole on the forehead of life,

I am colour and light, all rife.

I am luminous in my nature,

A fire, the mount of Toor too, is my feature.

I am the peace of my uncle’s heart,

The light of ‘Qalandar’s’ visionary art.

(The war-song of the worker)

He who ascends the gallows with grandeur, is that you?

He who looks death in the eyes, is that you?

He who just accepts thorns for the sake of flowers,

Who bereaves the thorns,

He who waters the Pashtun garden, is that you?

Who on his own challenges the chain, that youth,

He who is among the diehards, is that you?

You are nothing, but even then you will remain treasured,

He who only ‘Qalandar’ can know, is that you?

(Revolutionary: To an opportunist)