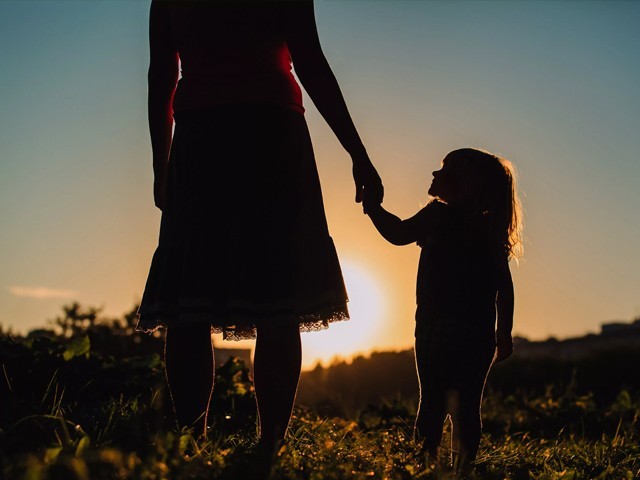 Her hands determinedly raised me to my tiny feet, every time I fell to the ground in the attempt to walk. PHOTO: SHUTTERSTOCK

I always gushed about how my Mother’s hands were beautiful; though, all wonder had ceased as I realised…

Her hands tenderly held my vulnerable self as I opened my eyes in this big-bad world; her face comforted me, there was an angel in this world Allah had sent me down to, I was in safe hands.

Her hands determinedly raised me to my tiny feet, every time I fell to the ground in the attempt to walk; her will to support me still gives me strength from then till today.

Her hands would swiftly push my swing as she pointed towards the sky, “Look Hira, you’re flying!” and I knew it, that I’d keeping soaring if she believed in me enough.

Her hands gripped my own as she helped me trace the ‘A’ for ‘Apple’ for my very first pre-school assignment; how would I have known the joy of writing without her paving the path for me?

Her hands gently traced verses of prayers upon my forehead each time I’d set out to run a race, I never returned without a medal; she made me invincible.

Her hands cradled me each time a nightmare jolted me awake; I knew it then and there that the demons of my nightmare would have to go through her to get to me.

Her hands wiped those seemingly infinite tears away, which otherwise would’ve never stopped; her touch healed my soul after every sorrow.

Her hands are as magical as an elixir; which make any bitter medicine tolerable to gulp down and cure all illness.

Her hands still affectionately feed me my food if “I don’t want to get my hands messy”; those are the meals which always somehow seem to be the most delicious.

Her hands are my ultimate praise and severe critic as she pens down her thoughts about my work; she is the reason behind all my success.

Her hands are what have changed my fate, shielded me from brutalities and made my dreams come true; each time her hands were raised in prayer, she gave me hope, the hope that it’ll all be okay, the hope that life will be kinder to me.