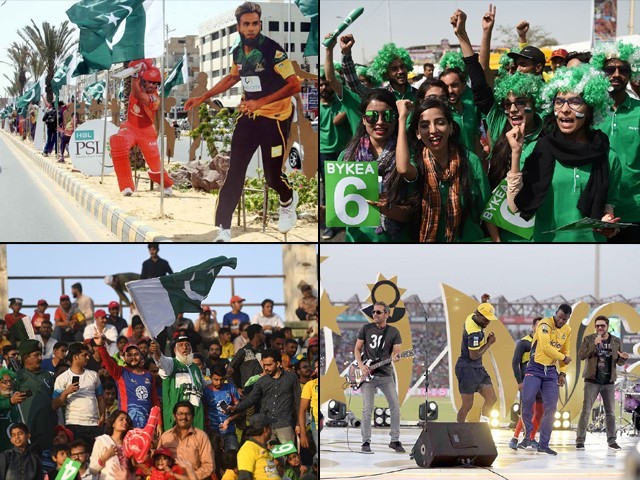 The match may have been won by Islamabad United, but the real victory was seen in the happiness of the crowd.

Not too long ago, the city of Karachi was the hub of fear. Residents constantly feared for the law and order situation, and people would think twice before stepping out at night. The festive nature inherent in the spirit of Karachi only made this situation tougher, as in light of growing terror, the festive mood and the lights of the city slowly faded away. Years ago, when the doors of the National Stadium finally closed as well, the people of Karachi eventually forgot what it feels like to turn the lights back on.

It definitely felt more like a dream than reality when it was announced that the Pakistan Super League (PSL) final would take place in Karachi. Till the very end it was hard to believe this would actually take place, as people in Karachi doubted its finality and kept asking questions such as,

“Will it actually happen?”

“Will international players back out last minute?”

Despite some initial worries, the city was decorated with hoardings, banners, and giant posters of the players; all to highlight how ready the city was for cricket to return. The day before the final felt like Chaand Raat in Karachi, and people could not help getting out of their cars to take selfies with the posters of their favourite players. The excitement only increased on the day of the final; if the days before felt like Chaand Raat, the day of the PSL final felt like Eid itself. 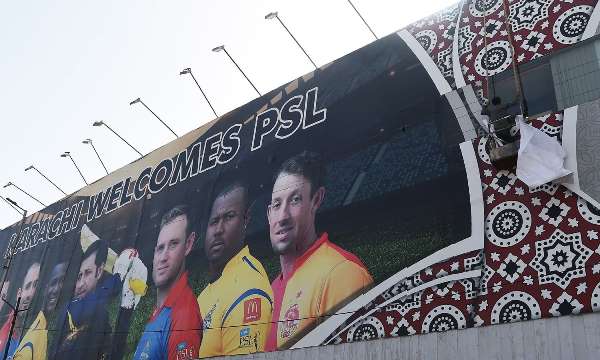 Since the PSL is mostly about regional rivalry, most of Karachi was undoubtedly supporting the Karachi Kings, who unfortunately lost to Peshawar Zalmi in the second eliminator, and thus could not secure their place in the final. Regardless, having the final take place in its territory was victory enough for Karachi, and its people came out in equal support for both, Islamabad United and Zalmi. The crowd was a mix of United and Zalmi supporters because in the end, the fans knew that no matter who won, Karachi, along with Pakistani cricket, would be the real victor. 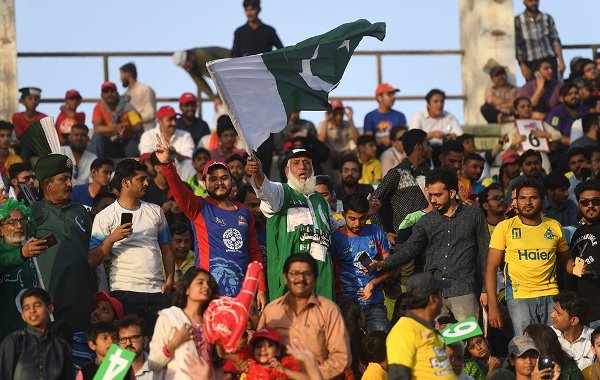 We were told that gathering outside the stadium on the day of the final would be a tough task, as the process to ensure security would result in long queues and hours of waiting. But after experiencing it myself, I have to commend the security arrangements. The security staff was professional yet polite, and even went to the extent of gifting bouquets to the cricket fans as a gesture to welcome them. It was equally amazing to see the fans remain disciplined and cooperative as they waited patiently for hours, which, if you are from Karachi, you must know is a miracle in itself. 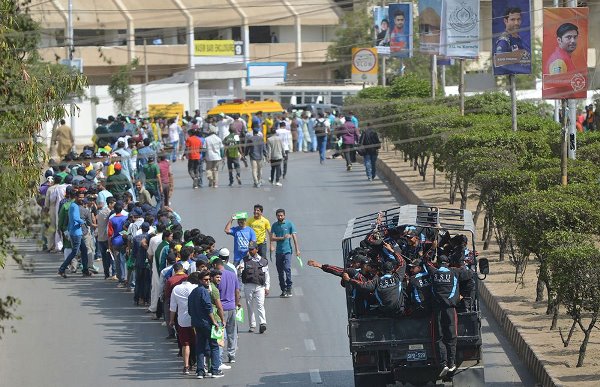 Cricket fans lineup outside the the National Cricket Stadium in Karachi on March 25, 2018, for the PSL final. PHOTO: AFP

Once you entered the stadium, the long walk and security procedure felt worth it. The charge of excitement could be felt in the crowd, and as one took their seats, it was clear from the get go that this was going to be an unforgettable experience. As the grand finale kicked off with some great music, the energy of the crowd only heightened, especially when crowd pleasers such as Darren Sammy and Hasan Ali joined the dancing and showed us their moves. It certainly was a rare sight to see Sammy and Andre Fletcher dance to our national cricket anthems, with as much enthusiasm as if they were truly their own.

Safe to say, everyone was excited about the match itself, and largely unconcerned about its outcome. The most memorable moments of the match were unquestionably during the closing ceremony, such as when JP Duminy greeted fans with an “Assalam alaikum”, and thousands of people responded with a resounding “Wa Alaikum Assalam”.

The banners in the audience alone were proof of everyone’s anticipation, while the crowd was filled with slogans such as “we love Sammy” and “we love Ronchi”, reflecting the emotions of cricket fans who have waited nine exceedingly long years for cricket to return to their home.

The match ended up being decidedly in favour of United, who dominated throughout. Wickets kept falling for Zalmi in the first half, and their bowlers could not stop the hurricane that is Luke Ronchi, who undoubtedly provided most of the exciting cricket that night. The fans wearing red shirts couldn’t help but tease those in yellow, especially since Zalmi supporters had the front seat to the catch dropped by Kamran Akmal – a memory they will surely neither forget nor forgive anytime soon. Ending the match with a stunning shot only made the audience cheer louder, as this homecoming match proved to be an exciting one, offering entertaining cricket as promised.

The match may have been won by United, but the real victory was seen in the happiness of the crowd. The onset of the fireworks burnt all the fear and uncertainty in the air, and the lights of the city once again sparkled in the eyes of thousands of emotional fans. Some of the spectators were left in tears, while others were laughing out loud and having the time of their lives. No one could believe they had finally experienced the flavour of international cricket in their own city. 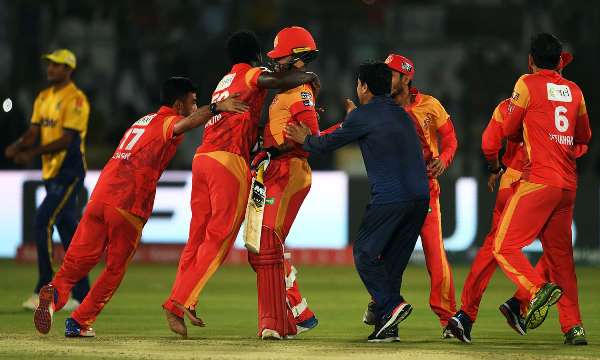 The people of Karachi are undoubtedly indebted to all those international players who made this experience possible for them – the players who came to Pakistan, and to Karachi specifically, when their peers were reluctant to do so. They made us dance, cheer and laugh, and most importantly, they gave us hope, and we genuinely thank them for it.

Congratulations to whole Pakistan specially Government,all law enforcing agencies, @TheRealPCB,broadcaster,commentators,match officials and all foreign players who made PSL 3 a success story.Special thanks to people of Lahore and Karachi for amazing atmosphere in the stadium.

The return of international cricket in Karachi has just begun, and after this grand inauguration, the National Stadium is now ready to host its first international series in April, against West Indies. One can only hope this feeling is here to stay, and that it won’t take another nine long years for fans in other parts of the country to experience international cricket at home.