When giving your child quality education only costed Rs10 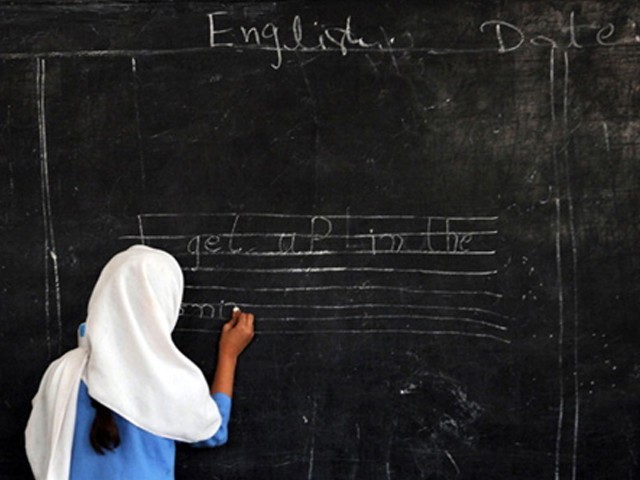 A Pakistani female student writes a sentence on a black board at a government school in Peshawar on October 25, 2012. PHOTO: AFP

During the 1950s, I was studying in a missionary school (St Patrick’s). Many people in position of power have studied from the same school, such as a president, a prime minister, many army officers, government ministers and the famous Indian politician LK Advani. I still remember how the school fee at that time was only Rs10.

But one day, in 1956 or thereabouts, the fee structure was changed. For some boys, the fee remained at Rs10, for some (like my brother and I) it was raised to Rs25, while the rest had to pay Rs37. Even though the school was informed that my father’s income was not enough for him to be able to pay Rs10 per child, they concluded that we were from a middle-class family – perhaps it was assumed so because my brother and I came to school in a second-hand car, while the families considered wealthy had new cars or maybe more than one car – and so had to pay the fee accordingly.

To the children of today, Rs10, 25, 37 or even 100 does not mean much, but in those days, a bank manager’s salary was Rs400 per month and it was sufficient for him and his family to live comfortably. It cost a total of Rs1,500 (including books) for me to get through four years of engineering college and acquire a degree.

It was Zulfiqar Ali Bhutto’s government that dealt a death blow to education. By indiscriminately nationalising most private schools and colleges (including some which were run by missionaries), he ensured that poor Pakistanis would never be able to get quality education, and only the children of the elite would get reputable jobs.

As the years went by, the standard of education deteriorated so much that it was sometimes very difficult to find a graduate who could write a simple sentence in any language. This was honestly not surprising though, considering that most schools had ghost teachers who turned up only to collect their salaries (as they were party activists who were otherwise unemployable). Men from the rural areas were appointed as school principals, despite not being able to sign their own names!

Private schools were allowed by General Ziaul Haq who also returned some schools to their original owners. But the damage had been done. Even today, those who set up new schools are afraid that some future government will nationalise their schools, which is one reason why the fees in private schools are so high.

The least expensive school today charges Rs1,800 a month, missionary schools Rs6,500, while monthly school fees in most other schools are Rs10,000-20,000. There are some which charge even more (from Rs20,000-117,000) but these are only a few, where the children of our feudal lords, smugglers and tax evaders go to be educated. To get a professional degree requires millions, as a result of which only children from very rich families can become doctors, engineers or graduates with business degrees from quality institutes.

The question then arises, where is a poor man supposed to send his children for quality education?

My driver has nine children, earns Rs20,000 per month and it’s obviously very tough for him to survive and sustain, and provide for his family. His sons study in a madrassa which charges Rs200 per boy, while his daughters, according to him, don’t need any education as they are married off as soon as they attain puberty.

Can you imagine what his sons will do once they leave the madrassa? They will have no technical and lingual skills, so they will not be able to earn enough to support their own families. Most of them will be recruited by religious parties as activists. However, one thing is sure – none of them will be hired as managers, and will have to settle for meager jobs such as that of peons or watchmen, if at all.

What of those who earn Rs35,000 to 40,000 a month and have two or three kids (officers in a banks or commercial organisations)? They would be able to get their children educated in missionary schools (provided their children are admitted there). But knowing the number of applicants desiring to be educated in good schools, it is doubtful if this would be possible.

When men cannot earn enough to survive, they turn to crime. Lack of proper training and education results in unemployment which drives them to resort to committing unlawful activities such as mugging and theft. No wonder we have so many street crimes in our cities!

The situation is hopeless. Even though there have been protests against fee hike, the situation has remained the same. The courts forbade private schools from increasing fees by more than 5%, but then, there are other ways for schools to make money, such as increasing admission fees (which in some cases is one to two lakhs). They can also increase other charges like sports fee – there is nothing to prevent them from extortion and plunder. The government is powerless because there is no law in place which can force private schools and colleges to reduce their fees, while the state has no funds to establish more quality schools and colleges.

Every generation has certain responsibilities towards the next generation, and education being a vital foundation is one of them. If we cannot even provide basic necessities such as quality education and create a fair and equal environment for our children, why bother with bigger things and better opportunities?