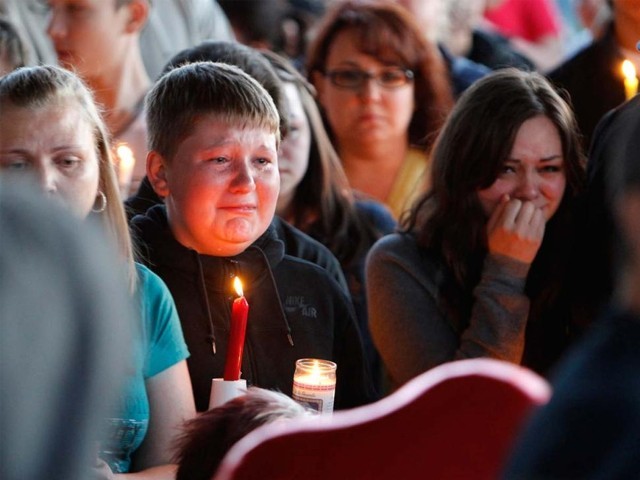 Supporters grieve at a candlelight vigil after the shooting at Reynolds High School in Troutdale, Ore. PHOTO: REUTERS

Thursday, October 1st was a horrific day in the US as it witnessed its 145th educational campus shooting of 2015. In the worst of the 17 college campus shootings of the year, 26-year-old Chris Mercer shot and killed 10 students and wounded nine others of Umpqua Community College in Roseburg, Oregon.

In the ensuing police shootout, Mercer himself was killed. As the country scrambled, yet again, to figure out who exactly is accountable, President Barack Obama not only placed the blame squarely on ineffectual gun control laws but also expressed his frustration at being hand-tied in a GOP-run congress that leaves him unable to take firmer measures.

The president wasn’t wrong when he said that his countrymen were becoming numb to school violence and that it was lamentable that the US was the only advanced country in the world to witness such violence every few months. Putting a stop to school shootings, however, remains a catch-22 question for Americans.

Although it is the constitutional right of every citizen to own a gun, it is this very right that puts guns in the hands of irresponsible teens. Every time a shooting occurs, there is hue and cry for serious amendments to the right to bear arms. But any amendments are yet to be seen. If 74 school shootings in the past 18 months aren’t ample enough justification for such amendments, one wonders what more could be.

Supporters of the constitutional-right angle of the argument suggest more extensive background checks and monitoring of signs of mental stability of the buyer before guns are sold. But as evident by an unabated consistency of school shooting incidents, this is not enough. Mercer had planned the Thursday morning shooting very well as he came to campus with not one but six guns, five extra ammunition magazines, and a steel plate fitted flak jacket. In addition to these, seven more firearms were found at his home and each, except one of these firearms, was legally purchased either by himself or by a family member.

This only proves that even if the actual buyer is deemed unqualified to own a gun, there are plenty of other ways for him to get it from a friend or family member who does own it. Hence, at the end of the day, what the country needs is less firearms. If the society isn’t responsible enough to have guns, it should not be allowed to have them.

Another other serious point was the elements of religious extremism in Mercer’s narrative. He distinctly isolated and killed only the Catholic Christians. The ones who answered that their faith was anything but Catholic were shot in the legs. Or perhaps, one could argue, it was an entire lack of faith in Mercer since in his words he was ‘not religious but spiritual’. Born in the UK, Mercer’s blog and Myspace page pictures also indicate his empathy with the IRA. It won’t be wrong to assume that these extreme tendencies in his personality could have been the greatest catalyst behind the bloody rampage.

Described as ‘hate-filled’, evaluations of Mercer’s personality reveal him to be not only anti-government, but also anti-religious, and a white supremacist. Undetected psychological issues as deep-rooted as these, working in combination with a constitution that allows people to bear arms ironically for their protection, tragic school shootings are becoming a bane of parents across the nation. In his press conference, President Obama regretted that his discussion on the subject of gun-control brings forth accusations of ‘politicising the subject’ but he says that this won’t stop him. And he’s right. Call it politicising or anything else, the US needs to review its gun control laws as a matter of critical priority.

Ironically, if the NRA adamantly supports guns so that citizens can defend themselves from radical foreign elements, it hasn’t studied the statistics of how many ‘radical extremist foreign’ agents were actually behind all the school shootings that have occurred just within this year in the US. Not a single incident is connected to the type of threat for which citizens are supposed to buy guns.

The bottom line is that the gun lobby is placing guns in the hands of all the wrong people; school-going kids who heartlessly massacre their own fellow students and citizens of the same country.

Today, kids are growing up in a most unpredictable era where they are susceptible to corruption and influence by negative information from the internet and multitudes of social media channels. This makes it crucial for behavioural and mood changes to be very closely monitored by academicians, classmates, neighbours, and friends, in addition to family members. It is useless to analyse later that the individual who shot and killed students was actually a ‘hate-filled’, isolated, weird acting guy. This won’t bring back the students who died. But having kept a closer eye on the individual prior to the eruption of this anger could have helped. Especially when gun control laws are lax and it is easy for anyone to legally own a gun or acquire it.

Yes, everyone has a right to privacy but there is nothing wrong with keeping a closer eye on suspicious behaviour. As soon as such suspicious behaviour is observed, the first thing that needs to be monitored is the person’s social media activities for signs of extremist tendencies. The second thing is to check if the person possesses firearms. The next step is to check the type of firearms. This applies more to teenagers living alone who could be collecting a stash of legally bought firearms to be used for mass massacre at colleges and religious institutions.

Unless gun control is tightened, the next step would be to check every student’s bag at the entrance. But this would be representative of a society that allows so much freedom to it citizens and every person is fearful of how the person next to him will abuse this freedom. Society needs strict laws in order to provide stability and safety. If stability and safety are perilously at stake, as with the issue of guns, something isn’t quite right.