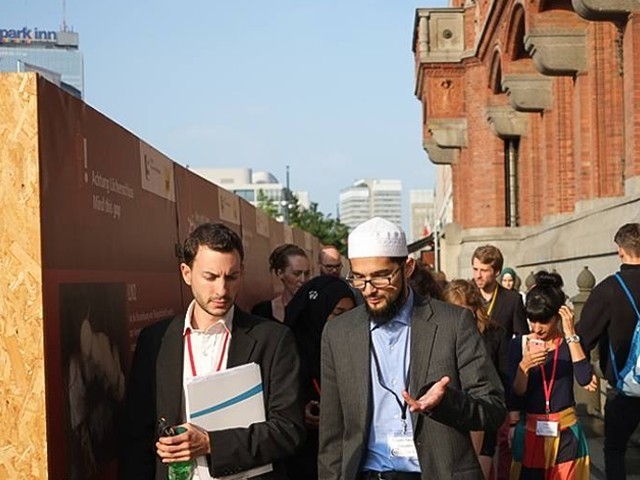 As we prayed Jumma together and welcomed the Shabbat queen together, something changed. PHOTO: MUSLIM JEWISH CONFERENCE FACEBOOK PAGE

The first session of the sixth annual Muslim-Jewish Conference (MJC) began with the following announcement:

“Everyone separate into two categories of groups. Muslims sit with Muslims and Jews sit with Jews. Let’s write down stereotypes that you think people hold about your religious identity.”

It didn’t take long for the stereotypes to roll in. The Muslims jotted them down rather quickly. We’ve all heard them countless times and they’ve been stitched into our consciousness. Words such as terrorist, judgmental, and oppressed were penned down. The Jews were quick to word out the stereotypes as well – wealthy, conniving, and greedy.

A Jewish New Yorker shared stereotypes he butts heads with every day, from jokes about his gigantic ‘Jewish nose’ to the popular perception of Jews as big, bad instigators of violence.

A Muslim from London offered a negation to the stereotypes – all Muslim hijabi women are not oppressed, all bearded Muslim men are not extremists and all Muslims do not eat hummus and conspire against the West all day.

We were two of the 170 Muslims and Jews moored in a remote corner of Germany, hailing from 44 countries and every walk of life imaginable.

Over the next week, we continued our conversations about problems and prejudices in our communities. We talked to government officials from Germany and USA about how Muslims and Jewish communities can communicate better. We quizzed an Australian Jewish scholar and a Canadian Muslim Imam on everything – from sacred texts to prayer traditions, sectarian divides to gender roles – in an attempt to understand our religions better. Most importantly, we asked each other endless questions.

What is the difference between Shia and Sunni Islam, Orthodox and Reform Judaism, Sephardi and Ashkenazi Jews?

What is the significance of the kippa (yarmulke) or the hijab?

Are women disenfranchised in the name of religion in our communities?

We found ourselves grappling with questions such as, how do you explain Jewish identity to a Muslim from a country with no Jews, where Judaism is synonymous with Zionism and Zionism with terrorism?

How do you tackle biases within your very own community, let alone those in other faith groups?

The questions were endless, each one as arduous as the former. While we didn’t have answers to every one of them, we were struck by the power of honest and constructive dialogue. By making an effort to humanise the ‘other’, we found ourselves listening with the intention to understand, not to retaliate.

Sure, we did find ourselves on the opposite sides of the debates. We fought the overwhelming urge to preach that our own point of view is the most poignant and our community’s suffering the greatest. In addition to that, the two groups had their internal squabbles. Muslims disagreed with other Muslims. Jews disagreed with other Jews. This dispelled the myth of the singular monochromatic identity on both sides.

And of course, we had to tackle the elephant in the room – the Arab-Israeli conflict.

Yet, as we prayed Jumma together and welcomed the Shabbat queen together, something changed. In grappling with these questions collectively, we found ourselves capable of entertaining ideas without agreeing with each of them. It became easier to respect each other’s experiences and belief systems, no matter how different they were from our own.

We listened to an Israeli woman describe how a Palestinian friend she met at MJC comforted her when her brothers were in combat during an Intifada (Palestinian uprising). We met a non-violent Palestinian activist, who has founded a centre for peace dialogue in Ramallah, Palestine.

We heard narratives from Jews whose families have faced persecution purely for being people of the book in Western Europe, Middle East, and in the Holocaust. We learnt stories of Bosnian Muslims who suffered ethnic cleansing, Yemeni Muslims made homeless by sectarian violence and, Palestinian Muslims losing family to decades of conflict.

But the question is not who suffered more, or who suffered longer. The question is how we can come together to build a world where our children are not persecuted for their beliefs and where apathy won’t define our reaction to human suffering.

To do this, we have to move forward by communicating honestly amid the clamour of contemporary media and politics. And here we are, a Muslim Pakistani studying in Massachusetts and a Jewish American working in Jerusalem, trying to do just that.

We cannot solve conflicts by establishing a hierarchy of suffering or letting stereotypes from mainstream society take over us. We will move forward by listening – listening to live better, listening to learn things we cannot know in isolation, listening until there is enough room in the world for our commonalities and differences to coexist in harmony.

This blog was co-authored by Rachel Delia Benaim, a freelance religion reporter based in Jerusalem, Israel. Her work has been featured in The Guardian, The Washington Post, and The Diplomat, among others. Follow her on Twitter @rdbenaim (https://twitter.com/rdbenaim).