If Beauty and the Beast was based in Pakistan, what would Belle’s fate be? 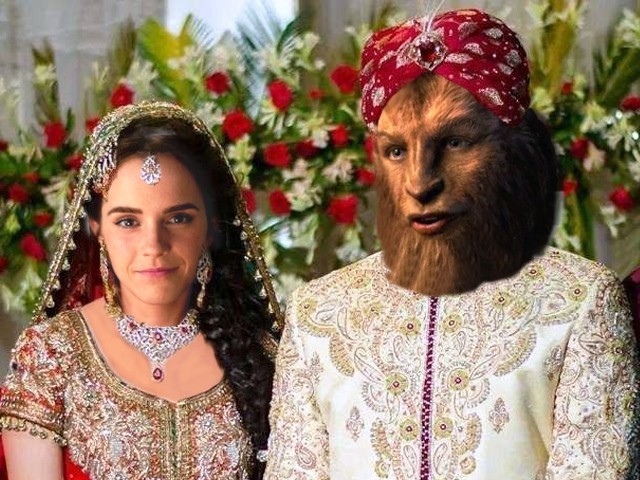 To free him, Belle gives herself up in his place as a trade-off.

Oh Disney, you and your goo-goo eyed characters and mush-tacular storylines.

Here’s the thing – you can’t fool us. We hail from the land of desis. We know what’s up. Just look at Beauty and the Beast. Unrealistic! We can believe the talking furniture and the enchanted experiments in botany, but as desis, we know exactly how it would have happened if Belle lived down the road from us.

The power of reading

Gaston spots Belle running around with a book in her hand. This is one of the best things about a woman getting a degree and involving herself in education – it lands her a man.

Shabash, Belle. You can put the books away now. Mission accomplished.

Gaston – the rishta all the Pakistani aunties love

Gaston sends his rishta and bam! The whole village is #TeamGaston. No one’s big like Gaston, no one’s a “chand jaisa Dulha” (moon-like groom) like Gaston.

(Look, this is what happens when they keep studying. She’s lost her mind.)

Belle’s poor father, alone and wifeless, has no clue how to raise a daughter. All that raising, nurturing stuff is ma ka kaam (mother’s duty) and her only kaam.

But alas, Belle has no ma, so this is a job for the unacknowledged heroines of our time – the aunties.

“Girls don’t know what they want,” these aunties tell her father.

United Nations International Children’s Emergency Fund (UNICEF) says one third of the world’s women get married below the age of 18, so Belle’s already lagging behind. Her father should think of her future. She’s already quite old. She should be grateful to even receive such a rishta.

I mean, does Belle even know how to cook? A little less reading and a little more round roti-ing and she’d have real options. Maybe she’d never have to choose between Harvard and Yale but she’d have been okay choosing between Tom, Dick and Stanley.

Belle’s father panics. He agrees to the proposal. Once the date has been fixed, nefarious laughter rings through Belle’s little town full of little people. Little does Belle’s father know, he’s next.

Belle’s father is imprisoned by the Beast because he tried to get a mufta (free) rose from him. And we all know what happens when you break the law – you get punished; especially if you’re poor and can’t bribe the higher-up Beastly kinds.

But never fear. There’s another asset he possesses – a daughter! To free him, Belle gives herself up in his place as a trade-off. This isn’t unusual. Women have been trading themselves for the benefit of their male relatives since forever. There’s an immediate nikkah.

The castle is bursting with excitement. The wardrobe starts getting the “barri ke joras” (clothes given by the groom’s side) ready. The talking teapot enquires about the jahaiz (dowry).

No can do, Mrs Potts. Belle’s father is extremely poor. Everyone in the village is.

No jahaiz? The Beast is furious.

Belle’s value plummets. The talking candlestick and clock whisper to each other about the kind of lower-class family she must come from.

No ‘Be our guest’.  Go make them round rotis pronto!

No library. Only ghardari (home-making)

Dusting the library is permitted though. Lucky Belle!

No party without biryani

She wears her gorgeous yellow dress and there’s that iconic dance.

But something is conspicuously absent.

What are all the servants supposed to do when the upper-class is engrossed in their conspicuous consumption of wealth? They’re meant to prepare the food, not stand about gawping.

Less zafron on the dress and more zafron in the rice woman!

Who knows, maybe the Beast is one of those guys who believes in letting women visit their maika from time to time. Especially since he doesn’t have a mother to be offended by the very idea. Belle leaves her susraal. There’s a male bimbo-sized problem though…

Gaston isn’t accustomed to hearing the word ‘no’. Belle was his. Now she’s the Beasts’ thus his honour has been insulted.

Belle meets a tragic and gruesome end in a scene that is censored due to violence. Gaston’s ghairat is satisfied.

That was such a beautiful movie.

Let’s face it, even in the Disney version, the Beast wouldn’t have shaped up had it not been for the ‘when the last petal falls’ axe hanging over his head.

Or is that the key? If we as a society put some pressure on the men, hold them to a deadline that once passed would mean they’re boycotted by us…would that make princes out of the beasts? Is the imbalance and toxicity we see in many households the result of standards set solely for the women? Is that Disney’s secret message?

On second thought, I think I like Disney’s version more.