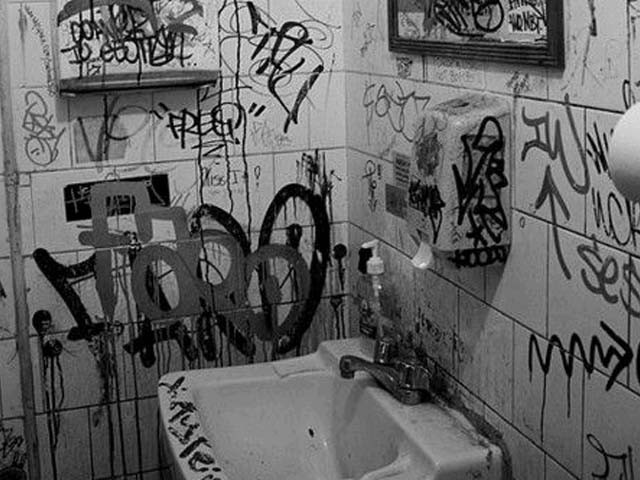 There were certain themes in the chaos that decorated those walls. PHOTO: PINTEREST

Long before Pakistanis vented their frustrations out on Facebook, Twitter or WhatsApp, there was another social networking platform where they would speak their minds; the walls of public bathrooms.

You may have a brief sojourn at your favourite motorway stop, a loo in a college or one of those rare public rest-rooms that your rulers kindly allowed you to have. All you needed to do was have a look at the wall and there they were: the hopes and the fears, the laughs and the hatred, the good and the bad of a society constantly ruminating over their existential woes in the most unpromising yet intimate of places.

The first question that comes to mind is, how? A question of logistics! Who in their sane mind takes a ballpoint pen to a washroom? But that is irrelevant. The frequent white washing and/or the new tiles making it difficult to write, along with the screams of outsiders waiting at the door did little to stop them. In a society that is hell bent on curbing individual voices and free thinking, many felt their voices heard in those corridors of certainty. They smuggled in whatever they felt was an appropriate medium. Some even adopted John Nash style markers to write their thoughts on the tiles.

There were certain themes in the chaos that decorated those walls.

Firstly, there was the sectarian hatred that was brewing in our society. Often, certain sects were declared infidels. Sometimes these slogans were aptly responded to by the sect in question. There was a certain Reddit or Facebook type of flow to these arguments with each comment either endorsing or repudiating the logic of the previous post. At times the original comment was erased, crossed or amended, with the wall representing the vetting of a draft communiqué by a veteran bureaucrat.

There were political comments too. Sometimes it was a crude joke about Benazir Bhutto, while occasionally it was the bald sketch of Nawaz Sharif. For a long time Jamaat-e-Islami’s leader Qazi Hussain Ahmed was rumoured to be coming or going. He seemed to have said other things as well which the occupants of the washroom boldly declared – but most of that cannot be published. When the TV documentary series “Koi dekhey na dekhey, Shabbir tou dekhey ga” was aired, many felt the same reminder was appropriate for the occupants of the room.

Some of the insults were more personal. They usually referred to the female family members of the person who would be reading that post, claiming that they’re doing inappropriate things in their spare time. In almost all circumstances they would either be sisters or mothers, never an aunt or a cousin. Surprisingly, none of these messages were erased or deleted. As a nation, we have accepted the denigration of female members much more willingly than the religious epithets that describe us. Most of the time, these slurs were replied to with even more graphic descriptions of what was going on on the other side of the fence.

There was a common thread (yes, it’s Reddit all over again) of offensive drawings. Most of this stuff was a crude representation of reality, but some of them were real genuine masterpieces. In the washrooms of the Government College University in Lahore, there was a bloke who would take time out of his busy routine to mark all the washrooms with his not-so-fine art skills. He would even sign them. Even if he hadn’t, you could have guessed the artist by the roundness of the curves and the jaggedness of the straight lines.

For a period of time, there was a trend of writing “J+A Rulez” type of posts. Apparently no one liked those. Instead, they started posting the phone numbers of whatever female name they could come up with. Soon the phone numbers were replaced with email addresses or, in some cases, home addresses. I can bet that most of those readers called those numbers or wrote emails.

Freud revolutionised the world of psychology with psychoanalysis of dreams. For him dreams were a window to one’s consciousness. Our deepest fears – our most intimate desires are unleashed in a world of surreal stories. Many social scientists used the same notion to decode art and the graffiti that embellishes our urban landscape. Therefore, bathroom writings could be just as expressive of our collective mind-set.

When a kid grows up in a culture that breeds sectarian hatred, it is not difficult to imagine him regurgitating the same nonsense on the walls. For a society, where people selectively loathed the politicians for their choice but had no other platform to express it, name-calling in the most despicable place is understandable. In educational institutes dominated by Jamiat (a student wing of Jamaat-e-Islami) Qazi coming or going suddenly becomes the favourite joke of the masses. In a country where abusing female members of the family becomes a favourite theme on stage and in theatres, a few of those jokes end up on the walls.

In a world filled with sexual frustration, predatory attitudes and paedophile behaviour, pornographic chalking is just the way we roll. Whether we appreciate it or not, our bathroom walls told us more about who we are than any other official declaration in the media. I wonder, have there ever been these kinds of ‘cave drawings’ in the female wash rooms?

It has been some time since I have seen these posts. Perhaps we have found better ways of expressing our anger, frustration, hatred and fears. I wonder: is this a good change or not?

The author is an entrepreneur, photographer, travel enthusiast and amateur writer. He writes on society, politics and things that trouble ordinary mortals. He tweets @Faded_Greens (twitter.com/Faded_Greens)

Hello, I am an Iftarholic and I have a few confessions to make

What is so similar about Pakistan and Turkey?