Dear Victoria’s Secret, does nothing really taste as good as skinny feels? 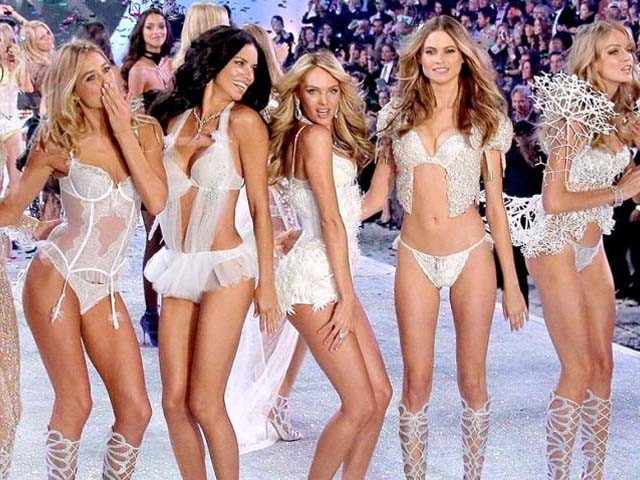 Dear Victoria’s Secret – for this I blame you; not just you but the entire modelling and film industry that feeds off young girls’ insecurities and amplifies them. PHOTO: TWITTER

When I was 10-years-old I wanted nothing more than to be a Victoria’s Secret Angel; I would spend hours prancing around in front of the mirror in my ‘sexiest’ high heels, practicing my cat walk and perfecting my hair flips. After the first few times that I was rejected by modelling agencies, I began to see myself through their eyes – the fat hanging off my bones, the gaps in my crooked smile and the emptiness between my thighs that would never be empty enough.

As I grew up, this turned into an obsession – I needed to make myself more desirable, conform to the ideal beauty standards you had imposed upon me when I was just beginning to bloom. And I guess I should thank you because your Bright Young Things collection of lacy underwear aimed at pre-teens helped me achieve this. I should thank you because my VS lace trimmed underwear with the words ‘Call Me’ emblazoned across the front was what made 13-year-old me feel more empowered – a word I used interchangeably with objectification.

I am angry. I am angry because last night I stumbled upon my sister’s shrine of models; glossy figures cut out from magazine covers, all slender legs and white skin, lustrous hair and hollow smiles – the epitome of femininity. I guess it all makes sense now – the constant meal skipping, calorie counting – she wants to be beautiful, she wants to be skinny, she wants to talk, walk, look and act like the models she sees sauntering down the runway.

And the sad thing is that I don’t blame her.

If my 12-year-old sister thinks that the only reason women were put on this earth was to be a vessel of sexiness and beauty then who am I to argue with that logic; isn’t that what the media portrays us as anyway? She is part of a generation that has been exposed to so much more than the objectification of women; she has learnt that a woman must be subservient; the eroticism of violence against women in advertisements by brands such as Calvin Klein allows her to associate violence and domestic abuse with pleasure. She has begun to realise – as I did at that age – that the size of a girl’s waist is what defines her, so can I really blame her for starving herself just so she can fit in at school?

The picture clearly represents gang rape. It’s an ad from Calvin Klein that features one woman and 3 guys.
Photo: pinterest

Dear Victoria’s Secret – for this I blame you; not just you but the entire modelling and film industry that feeds off young girls’ insecurities and amplifies them. I blame you for brainwashing every adolescent girl in the world into believing she will never be happy until she has a 24 inch waist. I blame you for making my sister believe that the only thing she can ever aim to be is beautiful when I taught her to be so much more.

I am sad. I am sad because I see my little sister going down the same path I went down when I was her age; the rabbit hole of insecurity and self-loathing that I tried so hard to prevent her from falling into. I’ve always been good at math and some days when I find her whispering to herself at the dinner table I realise she’s inherited my skill of counting calories. Some nights I catch her creeping into the kitchen to eat plain yogurt in the dark – a luxury her body craves but her brain denies. When she was younger, she wanted to grow up to be a mermaid; she acknowledged that it was a little impractical but drew the conclusion that she would learn how to breathe underwater eventually. These days, when asked what she wants to be when she grows up, her response is always “skinny” and I want nothing more than to rock her in my arms and tell her that the battle she is fighting with her body is not the end – happiness is like breathing underwater, all she needs to do is learn how to.

My brother waxes as my sister wanes. Rotund cheeks and beefy arms – at the cusp of manhood he assertively fills in the breaks in my sister’s speech with his roaring laughter; he has been taught to emit, how to roll each syllable off his tongue with an air of authority. He has too many opinions on God and politics, and feels the need to voice all of them. He has good intentions but still believes that a small waistline can make or break a woman. I don’t blame him because this is how he has been taught to view women. Neither can I blame you, Victoria’s Secret for perpetuating these unrealistic beauty standards upon women because, after all, you too were founded by a man who had good but selfish intentions – who just wanted to buy his wife something ‘sexy’ so she could look good, for him.

I don’t know if my sister’s body dysmorphia is a product of genetics or something she has been taught to view herself as by your company as well as other forms of media and print. What I do know is that there are little girls out there who whisper “nothing tastes as good as skinny feels” to themselves every time they skip a meal.

And THAT needs to stop.

An 18-year-old girl with a passion for reading, writing and napping She blogs at nineteenninetyate.weebly.com